In an executive order, President Biden directed federal agencies to “eliminate fossil fuel subsidies as consistent with applicable law.” It was not clear which subsidies Biden was referring to since the fossil fuel industry receives tax deductions rather than tax subsidies and many of the industry’s tax deductions are federal law. Biden also said he would ask Congress to end the $40 billion in fossil fuel subsidies through legislation. Where Biden is getting the “$40 billion” number from for fossil fuel subsidies is also a mystery. The U.S. Treasury, however, estimated that the Production Tax Credit that funds wind power will cost taxpayers $40.12 billion from 2018 to 2027, making it the most expensive energy subsidy under current tax law, though the solar investment tax credit is giving wind competition for that honor. Perhaps Biden has gotten them confused.

The production tax credit provides wind energy facilities with a tax credit for the first 10 years a qualified facility is in operation. The production tax credit came about as part of the Energy Policy Act of 1992 and was supposed to be short-lived to spur the deployment of a “young” industry, but has been extended 13 times. The solar investment tax credit provides a credit on the initial construction cost for a solar facility. Originally, the credit was 30 percent, but it has been phased down, and will remain at a 10 percent permanent credit for commercial facilities once Congress sunsets it.

Oil and gas companies receive tax deductions, not credits, that are mainly targeted to small independent oil and natural gas producers, rather than the major integrated oil companies. Two tax deductions are the percentage depletion allowance and expensing of intangible drilling costs. As the oil and gas in a well is depleted, independent producers are allowed a percentage depletion allowance to be deducted from their taxes, similar to the depreciation of assets recognized across the tax code for all businesses. This allowance was first instituted in 1926 to compensate for the decreasing value of the resource, and was eliminated for major oil companies in 1975. This tax deduction is estimated to save the independent oil and gas producers about $0.6 billion in fiscal year 2020.

Small independent producers are allowed to expense the full value of certain costs associated with the drilling and development of wells, known as intangible drilling costs, as business expenses to encourage them to explore for new oil. The major companies get a portion of this deduction—they can expense a third of intangible drilling costs, but they must spread the deductions across a five-year period. This tax treatment is also similar to that of other businesses for such investments as research and development. This tax deduction is estimated to save oil and gas producers about $0.4 billion in fiscal year 2020.

Another tax deduction is the Domestic Manufacturing tax deduction, which allows all industries and businesses (not just oil companies) to deduct a certain percentage of their profits—for the oil and gas industry, it is 6 percent, for all other industries (software developers, Corporate media, video game developers, the motion picture industry, and green energy producers, among others), it is 9 percent.

Comparison of the Cost of Tax Incentives for Renewable Fuels vs. Fossil Fuels

According to the Joint Committee on Taxation, the production tax credit for wind is estimated to cost taxpayers $4.3 billion in fiscal year 2020, the investment tax credit for solar is estimated to cost $6.0 billion. Because other renewable fuels also receive those credits, the table below shows higher numbers for them. Credits are much more valuable to companies because they represent a dollar-for-dollar reduction in any taxes owed as compared to deductions, which are based on the percentage of income tax owed. Since the corporate income tax is currently 21 percent, tax credits are worth about 5 times as much as deductions to a claimant. 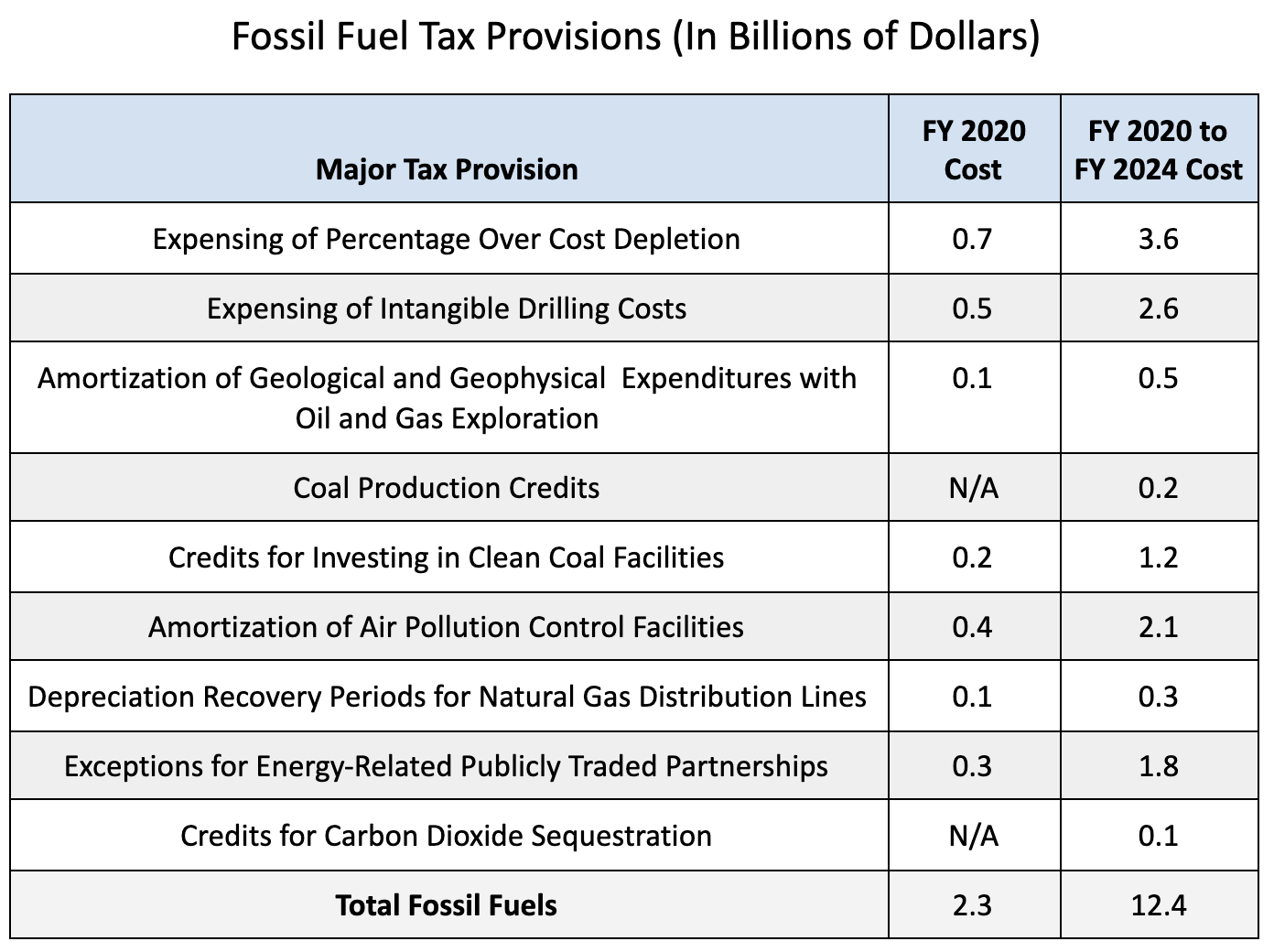 When compared to the relative amounts of energy produced by the differing sources, taxpayers are getting little benefit from wind and solar and a great deal of benefit from oil and natural gas. Almost all of our transportation is fueled by oil, and natural gas is the largest source for both heating homes and making the electricity that cools our homes, fuels our factories and schools and hospitals, and makes modern life possible.

But the advantages and disadvantages of these incentives vary greatly in terms of benefits—revenues to the government, employment, and energy contribution. Even if you accept the environmentalist argument about tax deductions, the small tax benefits available to oil and gas producers pale in comparison to the vast sums of taxpayer money being gifted by taxpayers to wind and solar generators. In return, even after all these billions, the U.S. economy only gets less than 4 percent of its energy from wind and solar, compared to 80 percent from fossil fuels. Non-hydroelectric renewable energy supplied 8.8 percent of the country’s energy demand in 2019, including the contribution from wind and solar power. As a result, on a per unit of supply basis, the tax incentives for fossil energy supplied 45 times more energy than the tax incentives for non-hydroelectric renewable energy.

President Biden is hurting American jobs by his war on fossil fuels through the cancellation of the Keystone pipeline permit, ban on oil and gas leasing on federal lands and waters, and his elimination of fossil fuel tax deductions that mainly support small independent oil and gas producers, who find most of America’s oil. Given that fossil fuels supply 80 percent of the nation’s energy and receive one-fifth of the subsidies that renewable fuels receive from the federal government, they are a far better investment than renewable energy. Except, of course, to the companies involved in gouging taxpayers for green energy subsidies.

President Biden is misleading the public by saying fossil fuels receive federal tax incentives of $40 billion—a number more in-line with what wind and solar receive from the federal government. Further, President Biden is not telling the public that fossil fuels supply 80 percent of our energy and that wind and solar power only supply 3.6 percent, after receiving years of federal subsidies.

Assessing the Convenience and Costs of an Electric Vehicle