According to Democratic Presidential Candidate Biden’s plan, he will focus on “capturing carbon dioxide from power plant exhausts followed by sequestering it deep underground or using it make alternative products.” However, out of the 6,586 industrial and power plants in the United States, only 418 facilities that qualify for credits are capable of supplying carbon dioxide cheaply enough for carbon sequestration. That is only 6 percent of the U.S. industrial and electric power base. Limitations to qualifying include:

The formations that could hold sufficient carbon dioxide are mostly located in a broad area from Montana through Texas to Louisiana, with small clusters in the Great Lakes area. Although there are a few existing carbon dioxide pipelines, most of the infrastructure would have to be built, and shorter lines would be cheaper to both build and operate.

Carbon capture and sequestration refers to a set of technologies that can reduce carbon dioxide emissions from coal- and natural gas-fired power plants and large industrial sources. It consists of a three-step process that includes:

The IRS code also limits the kinds of facilities that could claim a credit. Electric generating facilities have to capture at least 500,000 metric tons of carbon dioxide per year, while an industrial facility like a steel mill or ammonia plant would need to capture 100,000 metric tons. According to a recent analysis of the near-term potential of carbon sequestration from a total of 6,586 industrial and power plants in the United States, about 1,500 facilities meet the threshold. Those 1,500 plants were screened, “based on facility operation, production, energy use, heat rate, and other factors,” to find those that would be capable of delivering carbon dioxide to a viable storage site in the near and medium-term. 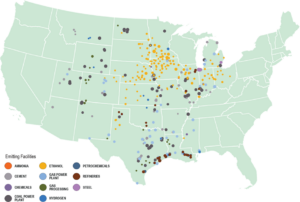 The following is a list of the 418 plants by type that qualify for the tax credit and are projected to be capable of economically reducing carbon dioxide emissions by carbon capture and sequestration. The study was performed by Dane McFarlane and Elizabeth Abramson of the Great Plains Institute, a Minneapolis-based non-profit, and economist Jeffrey Brown of the Enhanced Oil Recovery Institute. 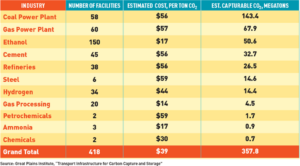 Joe Biden is planning for a carbon-free electric sector by 2035 and a carbon-free economy by 2050 and to do so he needs to remove the 63 percent of U.S. generation that comes from coal, natural gas and petroleum by 2035 and the 63 percent of the industrial sector’s direct use of these fossil fuels by 2050. But, to do so, he will have to replace most of the current fossil fuel technology with renewable energy—mostly wind and solar—because only 6 percent of current facilities will be able to economically retrofit with carbon capture and sequestration technology given the current tax credit. That will be an enormous transition because the current technology in most cases is operable for many more decades. Not only will Biden charge taxpayers for the tax credit and other stimulus money to jump start the transition, but the companies that can survive such a massive change will need to charge Americans more for the goods that they produce, and those goods may be uncompetitive with those from places like China that play lip service to carbon dioxide reductions.  As a result, more Americans will probably be faced with energy poverty and fewer jobs.

Biden Plan Rids the United States of Oil and Gas