China negotiated a $400 billion, 30-year deal with Russia to bring Russian natural gas to China beginning in 2018.[i] The agreement is for 38 billion cubic meters (about 1.34 trillion cubic feet) of gas annually, which is about 20 percent of Russia’s European gas sales. The deal is expected to further the strategic goals of Moscow and Beijing to diminish the status of the U.S. dollar by conducting world trade in critical commodities such as oil and gas using other currencies. This gas deal is the first major commodities contract to be settled in Russian rubles and Chinese yuan rather than dollars, and as such, should be reviewed carefully by policymakers for its implications on the United States as the world’s reserve currency.

The pipelines, pump stations, and processing plants necessary to transport the world’s largest infrastructure project will be built jointly by the two countries. The cost of building the infrastructure is expected to top $70 billion. Russian energy giant Gazprom plans to spend $55 billion and hire 11,700 people to build the pipelines, gas processing plants and other infrastructure.[ii] China may make an advance payment of as much as $25 billion toward the needed infrastructure in Russia. Further, the Chinese government is responsible for the pipeline on its own territory and will spend at least $20 billion on its construction. Russia and China are also expected to begin talks on a second pipeline to the west of the initial route.[iii]

The infrastructure being built will make Russia’s gas not only available to China, but also to Russia’s Pacific ports, where it can be liquefied and sold to Japan, South Korea and other Asian markets. The plan includes a liquefied natural gas plant in Vladivostok on the eastern coast of Russia that would provide liquefied gas to major port cities in China and to the rest of Asia. This project provides competition to U.S. exports of LNG to the Asia-Pacific. However, since both the Russian infrastructure and U.S. LNG plants are years away from completion, it is not clear how big the threat to North American projects is.

China sees the deal as the beginning of a security alliance between Russia, China, and Iran–perhaps the West’s three most formidable opponents. According to Mr. Putin, “the world is rapidly changing, and we are witnessing colossal geopolitical, technological and structural shifts.” He believes the United States is behind the curve in recognizing new global economic realities.

This gas deal provides Russia with a substantial stimulus for its economy, especially in its poorer regions in Siberia and the Far East, particularly since nearly all the steel pipe and other components will be manufactured in Russia. 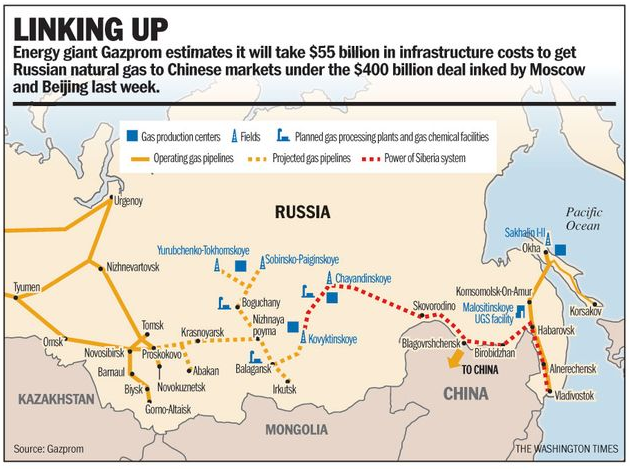 Competition from the United States and Canada

Both the United States and Canada are building LNG export terminals, most of which will begin operation in 2018 and will most likely supply the Asia-Pacific market. The U.S. Department of Energy (DOE) has 7 approved LNG export terminals, with a combined capacity of about 13 billion cubic feet per day, or 96 million metric tons per year—25 percent more capacity than the world’s largest LNG exporter, Qatar, which has a capacity of 77 million metric tons per year.[v] One of the 7 LNG export terminals has been approved by the Federal Energy Regulatory Commission (FERC) and will be providing LNG by late 2015.  FERC is expected to approve additional terminals beginning this summer. There are still about two dozen applications awaiting DOE approval. 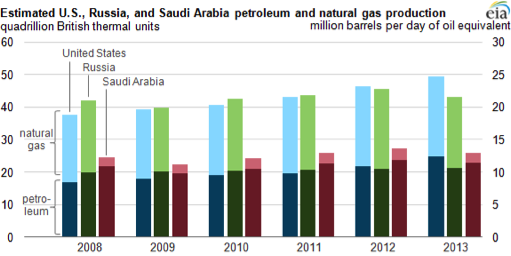 The Asia-Pacific market is a growing area for LNG exports and many countries are in the market to supply the area, including the United States, Canada, and Australia. Russia is now on the scene with the largest natural gas infrastructure deal made with China finding other avenues for its natural gas than European markets. The Russia/China deal is the first in using currency other than the U.S. dollar and may be an attempt to displace the dollar as the world’s reserve currency. Though many analysts are skeptical regarding the outcome of the switch in currency, if it were to come to fruition, it would create a period of global financial instability and force Americans to pay more for imported energy.[viii]

[v] Oil Price, How to Profit from Chinese LNG Demand, May 4, 2014, http://oilprice.com/Energy/Natural-Gas/How-to-Profit-from-Chinese-LNG-Demand.html

[vii] The Globe and Mail, U.S. LNG export can have a large impact overseas, April 27, 2014, http://www.theglobeandmail.com/report-on-business/industry-news/energy-and-resources/the-cascade-effect-of-us-lng-exports/article18293697/

[viii] The Telegraph, Russia-China gas deal could ignite a shift in global trading, May 24, 2014, http://www.telegraph.co.uk/finance/comment/liamhalligan/10854595/Russia-China-gas-deal-could-ignite-a-shift-in-global-trading.html