While we do not know yet what the damages of the Environmental Protection Agency’s (EPA’s) power plant rule is because of its dense language, confusing components, and 645-page length, we do know that Mr. Obama is Mr. Affordable Energy Killer because the purpose of the rule is to drive up electricity costs by shuttering coal-fired power plants, which generate about 40 percent of our electricity today, in favor of less carbon dioxide emitting plants.

While EPA claims that carbon, capture and sequestration equipment is available and economic for new plants, that statement is a lie demonstrated by the fact that its own analysis of the new rule does not require that technology on any plant.[i] That means of course that the technology does not exist or that it is so costly it would not be economic to choose that approach to meet the power plant rule.

Further, misstatement number 2 is that EPA claims that the new rule will create jobs and save consumers money. That is another misstatement because any time you shutter a stranded asset[ii] (in this case, a power plant that has many more years of life to produce electricity with most if not all of its capital paid for), you are increasing the cost of operation—costs that will be passed onto the electricity consumer. Also, many coal miners will be out of work since the requirement for coal production will be greatly reduced. How EPA can get a net increase in jobs is bewilderment since renewable plants require far fewer operators to manage than fossil fuel generating plants and has no associated resource jobs.

Once other analysts wade through all of EPA’s documents, we will learn the true cost of EPA’s rule to reduce our carbon dioxide emissions by 30 percent by 2030 from 2005 levels, which provides at best a miniscule reduction to global carbon dioxide emissions. In fact, the reduction in global carbon dioxide emission is so minuscule that EPA did not even bother to calculate the impact on temperature and sea level rise. EPA has its own model (called MAGICC) for doing this exact calculation and used it a number of times in the past including in 2010 and 2012 when the administration finalized rules purportedly to address climate change.  For EPA not to use that model now tells the American people that this rule is not about climate change since EPA does not even calculate the impact on climate change.

Yes, President Obama did tell us when he was first running for office that if you want to build a coal plant, you can, but it will bankrupt you. But, in this case, he is ridding us of existing coal-fired plants that have many more years of service life. Little does the President care whether there will sufficient and affordable electricity to heat our homes, power our lights, and run our computers. 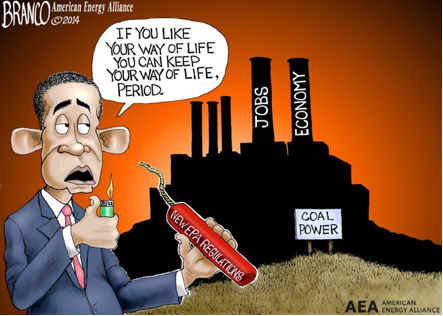 EPA’s 645-page rule provides states with options to reduce carbon dioxide emissions, from shuttering plants to installing more unreliable and expensive sources like wind and solar. Those options, which are very restrictive, will take away jobs, increase energy costs and hurt the economy. For example, in states that require higher portions of renewable fuels through Renewable Portfolio Standards (RPS), electricity costs are on average 30 percent higher than in non-RPS states. Shuttering coal-fired power plants would eliminate hundreds of thousands of jobs at coal-fired power plants and at coal mines that will no longer be producing coal since its demand will have been greatly reduced.

Capacity and reliability issues will ensue as we have already seen this past winter in the Northeast where coal and nuclear plants are being shuttered for natural gas and renewable plants. Because generation from renewable technologies is unreliable and the natural gas infrastructure was insufficient to handle the load, coal was used to keep the lights and heat on. But, once those plants are shuttered, Americans will have to rely on natural gas and renewables or suffer the consequences of insufficient power.

Further, when government policies close a power plant or a coal mine, other jobs follow. The lost revenue base hurts jobs at public schools, police and transportation services since the tax base is no longer there to support them. And, businesses find that they no longer have the customer base to remain open.

The EPA claims that by some miracle the costs of this rule will be negligible–between $7.3 billion and $8.8 billion[iii]. And, in fact, EPA Administrator Gina McCarthy said that the agency’s regulations will decrease energy costs by 8 percent by 2030.[iv] The math is questionable since it is impossible to raise the price of natural gas and coal electricity without also raising costs across the economy. The costs will ultimately flow to consumers and businesses. If somehow EPA’s analysis shows an 8 percent reduction in energy costs by 2030, it means that prior to 2030, consumers are paying huge costs for new power plants to be built to replace the shuttered coal-fired power plants and that those capital costs must miraculously be largely paid off by 2030.

To comply with the rule, states will be given a year to design their own implementation plans after the EPA finalizes its proposal next summer. In certain cases, some states may have until 2018 to implement a plan.  But, EPA must approve each state’s plan. But note that EPA’s track record has often not been favorable to state plans. For instance, the agency recently rejected state plans to reduce regional haze before they were formally proposed and revoked permits it had previously approved.  Further, if the EPA does not approve the state plan, EPA could impose its requirements on the state.[v]

The worst part of the plan is that it will cause harm to Americans, but will do practically nothing for global carbon dioxide emissions. While U.S. carbon-dioxide emissions have declined by more than 10 percent between 2007 and 2013, China’s carbon dioxide emissions have increased by 173 percent between 1998 and 2011, surpassing those of the United States in 2006. It is unlikely that other countries will follow the U.S. lead, particularly in the near term; for they know that it will harm their economies. China and India, for example, have thus far resisted American pressure to cut their carbon emissions as millions of their people begin enjoying inexpensive coal-fired electricity. Further, if these other countries were to impose limits on carbon dioxide, it is not clear whether those rules would be enforced. Unlike some countries (Italy or China[vi], for example), the United States enforces its laws. And, based on the EPA’s own carbon accounting, shutting down every coal-fired power plant and replacing them with zero-carbon sources would reduce the Earth’s temperature by about one-twentieth of a degree Fahrenheit in a hundred years.[vii]

Thus, when the White house tells us that these new rules will reduce electric bills and create “tens of thousands of new jobs”, as it did on Monday when it released the policy[viii], Americans need to realize that these statements are just more misrepresentations of the true facts.

Several states were already working to undermine some of the EPA’s regulatory power before EPA announced its new rules on Monday. For example, the Missouri General Assembly passed a bill (HB 1631) last month that would give the state’s Air Conservation Commission the ability to develop state-level emissions standards in place of the new federal rules. The bill requires the state agency to take into account job losses and economic consequences such as higher energy costs, which are missing elements in the EPA rule. Missouri gets 82 percent of its electricity from coal-fired plants. Kansas, another coal-dependent state, which relies on coal for 63 percent of its electricity, has approved similar legislation.[ix]

Europeans Put Security Ahead of Climate

That means the European Union must turn to coal. Germany has already turned to coal, which is cheaper than natural gas in Europe, to phase out its nuclear units and to back up its wind and solar plants.  The eastern German state of Brandenburg, for example, approved plans recently to allow a utility to mine an additional 200 million metric tons of brown coal (lignite). Although Germany generates about 25 percent of its electricity from renewable power, it needs a secure supply of conventional power, particularly for its industrial customers that can lose millions of dollars in power failures.[xi]

President Obama and his EPA are clearly on a mission to kill affordable energy in the United States and to make this country an example for others to follow. Others, and particularly the fastest growing carbon emitting countries, will not follow for coal is bringing their citizens electric power that they would not otherwise have and which is helping to grow their economies. Thus, Americans under President Obama’s plan will be paying much more for unreliable energy to serve as nothing more than an example to other countries for the global benefits of his plan are miniscule.

[i] EPA Connect, Setting the Record Straight on the Chamber of Commerce’s Report, May 28, 2014, https://blog.epa.gov/epaconnect/2014/05/setting-the-record-straight-on-the-chamber-of-commerces-report/