Arkansas has some of the lowest energy prices in the country. It has the 7th lowest electricity prices, almost 25 percent lower than the nation’s average electricity price. Its gasoline price is the 12th lowest among the states. It is also a producer of oil and natural gas. Its natural gas production has quadrupled since 2008 due to hydraulic fracturing and its oil production increased over 10 percent in just the last year. 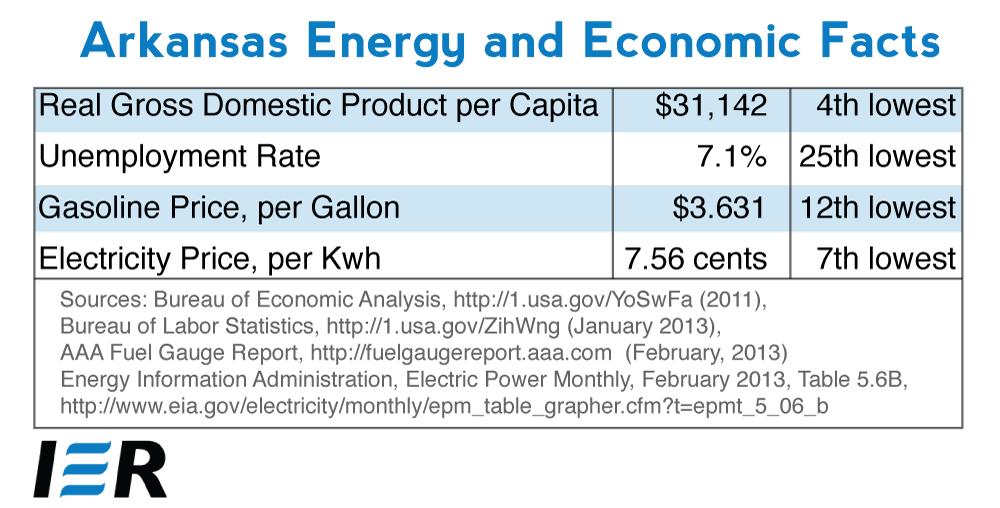 Shale gas in the United States is rapidly increasing as a natural gas source. Led by new applications of hydraulic fracturing technology and horizontal drilling, development of shale gas has offset declines in production from conventional gas reservoirs, and has led to major increases in natural gas reserves. In Arkansas, the Mississippian Fayetteville Shale play produces gas in the Arkoma Basin in the western part of the state. The productive section varies in thickness from 50 to 550 feet, and in depth from 1,500 to 6,500 feet. The shale gas was originally produced through vertical wells, but operators are increasingly using horizontal wells in the Fayetteville. Monthly natural gas production in the Fayetteville Basin increased 2,757 percent since January of 2007 due to hydraulic fracturing and horizontal drilling technology. 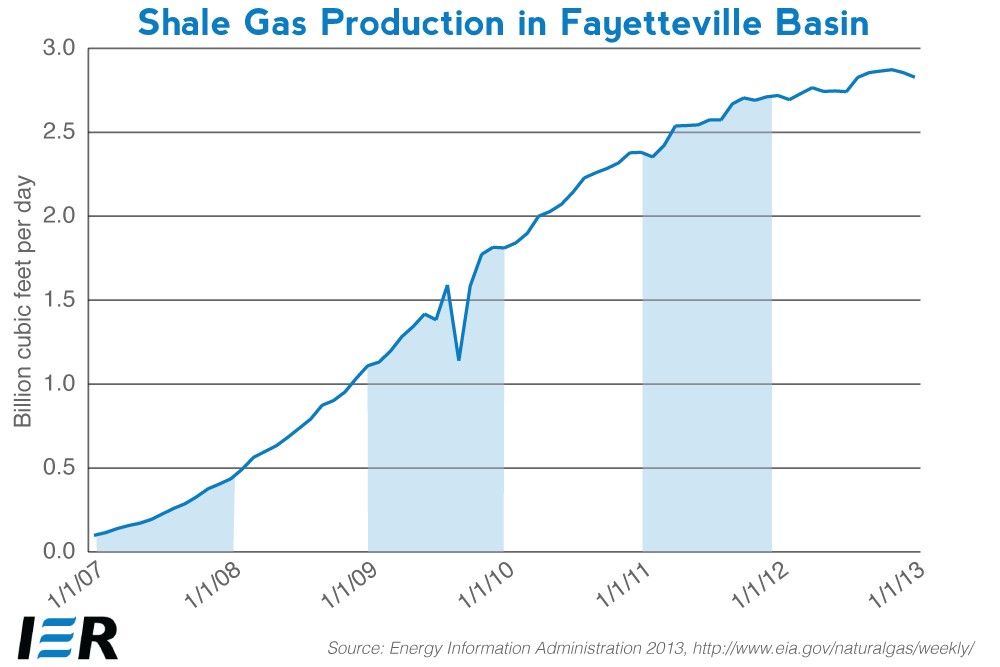 Several major natural gas pipelines from Texas, Louisiana, and Oklahoma pass through the State on the way to markets in the Midwest and Northeast. The two newest pipelines are the 500-mile Midcontinent Express Pipeline completed in 2009, and the 187-mile Fayetteville Express Pipeline completed in late 2010. The Fayetteville Express Pipeline brings gas from the Fayetteville Shale in Arkansas to pipelines serving the Midwest and Northeast. The 42-inch pipeline originates in Conway County, Arkansas, continues eastward through White County, Arkansas, and terminates at an interconnection with Trunkline Gas Company in Panola County, Mississippi. The pipeline has a capacity of 2.0 billion cubic feet per day.

Arkansas produced 6.5 million barrels of oil in 2012. The state’s oil production companies extract small amounts of crude oil from stripper wells (wells that produce less than 10 barrels per day) in the southern part of the Gulf Coastal Plain of south Arkansas.

Arkansas has two refineries. The El Dorado refinery processes a crude slate consisting of local Arkansas crudes, West Texas crudes and domestic offshore crudes. With a gathering system of nearly 1,000 miles of pipeline, domestic crudes are delivered to the refinery from southern Arkansas and northern Louisiana mostly from the Smackover field near El Dorado, Arkansas. The refinery has processed various crude oils, including foreign high-sulfur crude, domestic offshore crudes from the Gulf of Mexico, and local onshore domestic crudes.

Petroleum products are delivered to consuming regions by barge via the Arkansas and Mississippi Rivers. The TEPPCO pipeline also supplies petroleum products from Texas and Louisiana. Arkansas is one of the few States that allow the statewide use of conventional motor gasoline, rather than the use of special fuel blends required in non-attainment areas due to air-quality considerations. 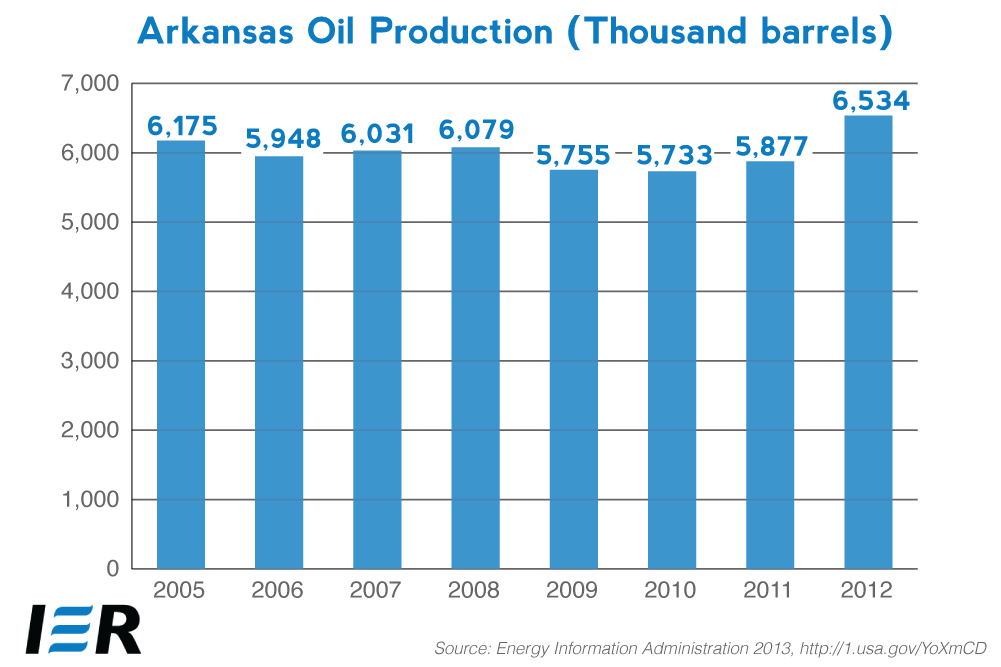 Coal, natural gas, and nuclear power are the dominant energy sources used for electricity generation in Arkansas. Coal-fired power plants accounted for 43 percent of the electricity produced within the State, and the plants rely on coal deliveries from Wyoming.  Ranking second, natural gas produced 27 percent of Arkansas’ electricity in 2012

Hydroelectric power plants in the White River Basin in the north, along the Arkansas River in central Arkansas, and in the Ouachita River Basin in the south contributed 3 percent to electricity supply in 2012.  Along 3 percent of generation in 2012 was produced from biomass. 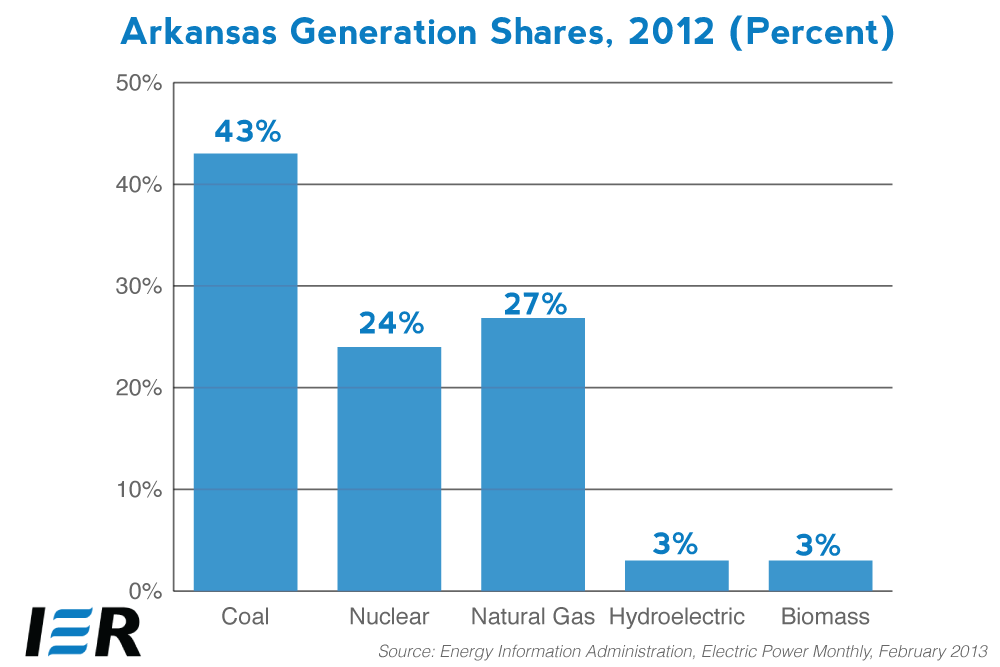 Fortunately for the citizens of Arkansas, the state has not imposed many of the regulations that other states have imposed that usually increase the price of energy. Arkansas adopted several policies to encourage renewable energy and energy efficiency including green building standards for State facilities, but it does not mandate the use of renewable energy in electric generation or blended into gasoline, as many states do.

Arkansas requires new residential and commercial buildings to meet energy efficiency standards. New buildings must meet an Arkansas-specific version of the 2003 International Energy Conservation Code that was developed by the International Code Council, and is a model code that mandates certain energy efficiency standards. House Bill 1663, enacted in 2009, directed the Arkansas Energy Office to develop a plan to reduce energy use from 2008 levels in existing state-owned facilities larger than 20,000 square feet, by 20 percent by 2014 and 30 percent by 2017. New state buildings must also be at least ten percent more efficient than ASHRAE 90.1-2007, a model code that mandates certain energy efficiency standards, and is developed by the American Society of Heating and Refrigeration and Air Conditioning Engineers.

Legislation enacted in April 2007 (HB 2334) increased the availability of net metering, improved the law’s provision for the carryover of net excess generation to the following monthly bill at the utility’s retail rate, and clarified the ownership of “renewable-energy credits”.