China’s coal consumption declined by 1.5 percent in 2015 according to BP in its Statistical Review 2016.[i] As noted in a recent IER blog, China’s decline in coal consumption and the fact that the United States dropped its coal consumption by 12.7 percent last year resulted in the first decline in global coal consumption since BP started collecting statistics in the mid-1960s.[ii] However, this may not be the start of a trend as other countries are increasing their coal consumption—Poland, India, Australia, Indonesia—to name a few. And, this is especially the case when China—a country that consumes 50 percent of the world’s coal–is building coal plants. The combination of low-cost financing and low coal prices that are half the level of five years ago make power projects attractive in China and provide employment for its population, helping the economy to grow. Over the next two years, China will spend tens of billions of dollars on these projects despite lower power demand. Last year, its investment in thermal power projects increased 20 percent. China is expected to add nearly 200 gigawatts of thermal power capacity between 2015 and 2017—most of it coal-powered and more than the entire electrical capacity of Canada.[iii] 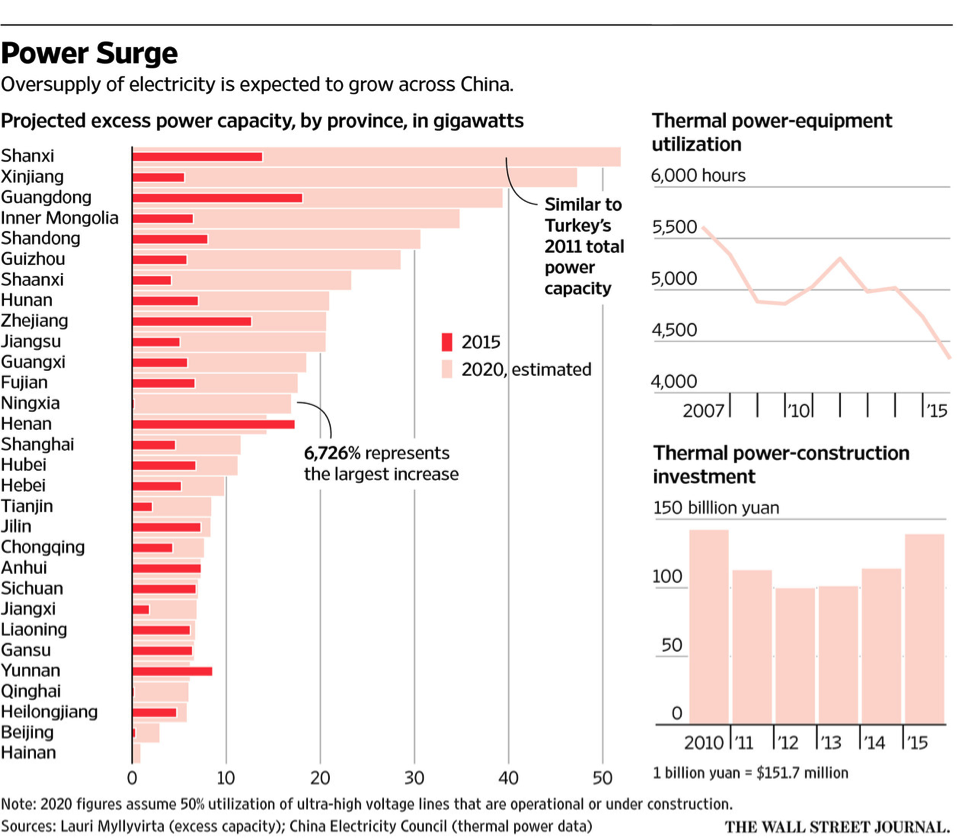 China pledged to increase its carbon dioxide emissions until 2030 and then reduce them at the U.N. Paris Conference last December. The government has promised to reduce overcapacity in the coal sector and other industries, setting aside 100 billion yuan to resettle laid-off workers, some 1.8 million of them from the coal and steel sectors. The National Development and Reform Commission, China’s top economic planning agency, has banned approvals for new coal-fired power projects in oversupplied regions. While this move may help curb some planned projects, many are already under construction.

China has more electrical capacity than any other country in the world, exceeding that of the United States earlier this decade. (See chart below.) Authorities justify new power plants indicating that they would replace older, less efficient ones. But capacity growth is outpacing the decommissioning of older units. Further, new thermal capacity will need to compete with other new power plants coming online: nuclear plants along China’s coast, wind farms across the northern plains and hydropower in the south. As more generating capacity comes online, utilization rates at power plants are falling during its current economic slowdown, as the chart above indicates. Electricity production in China during the first four months of 2015 increased by only 0.2 percent from the same period in 2014–one of the lowest increases in the past five years–and coal-fired capacity utilization in 2014 fell to its lowest level in 38 years.[iv] 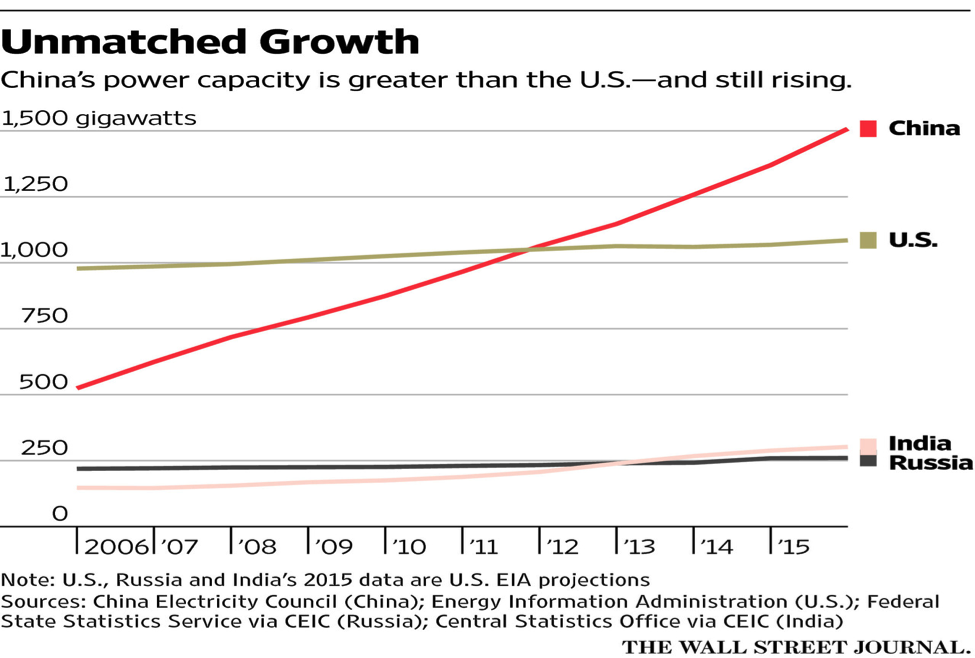 One force behind the increase in China’s coal-fired capacity is lower coal prices. As an example, prices for one coal type at the northern port of Qinhuangdao recently dropped to below $60 per metric ton from about $130 per metric ton in 2011. These low fuel prices keep projects profitable despite state-set electricity prices that have not declined as much as the price-drop for coal. China is considering reform plans that include letting industrial consumers negotiate power supply agreements with producers, which could bring down electricity tariffs. Further making investment worthwhile are commercial borrowing rates for loans of five years or longer that dropped to 4.9 percent at the end of 2015, compared with 7.05 percent in early 2012.

U.S. coal consumption plunged 12.7 percent in 2015 due to over regulation by the Environmental Protection Agency and competition mainly from currently low cost natural gas. Unlike China, coal-fired power plants are no lower being built in the United States unless they have expensive carbon, capture and sequestration technology that makes them uneconomic compared to combined cycle natural gas plants. Standards set by EPA in their new source carbon dioxide regulations for power plants make other new coal plants impossible to build.

In 2008, coal’s share of electricity generation in the United States was over 50 percent, but it dropped to 33 percent in 2015, as natural gas prices decreased and Obama’s policies against coal began taking effect. President Obama’s regulations have caused electric power companies to shutter over 400 coal-fired power plants that would be too costly to upgrade with the pollution controls required to meet EPA’s newest regulations. According to the Sierra Club, the U.S. coal-fired plants retired last year equals the entire coal capacity of Britain.[v] 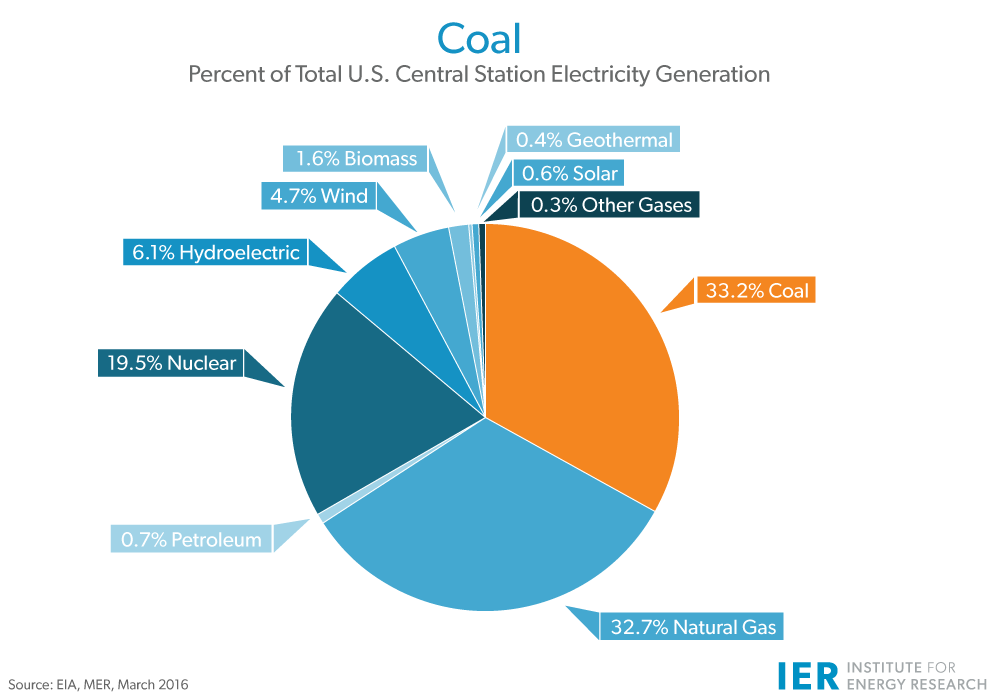 The shuttering of coal-fired power plants has caused coal production in the United States to fall to its lowest level in 30 years—896 million short tons. It peaked in 2008 at 1.17 billion short tons and is now 24 percent below that peak causing over 40 coal producers to file for bankruptcy protection. As a result, in just the last 3 years, mine employment has declined by 19 percent to about 75,000. The U.S. mining industry, including oil, gas and coal, lost 129,000 jobs last year, which is roughly the total number of men, women and children in Charleston, South Carolina.[vi] 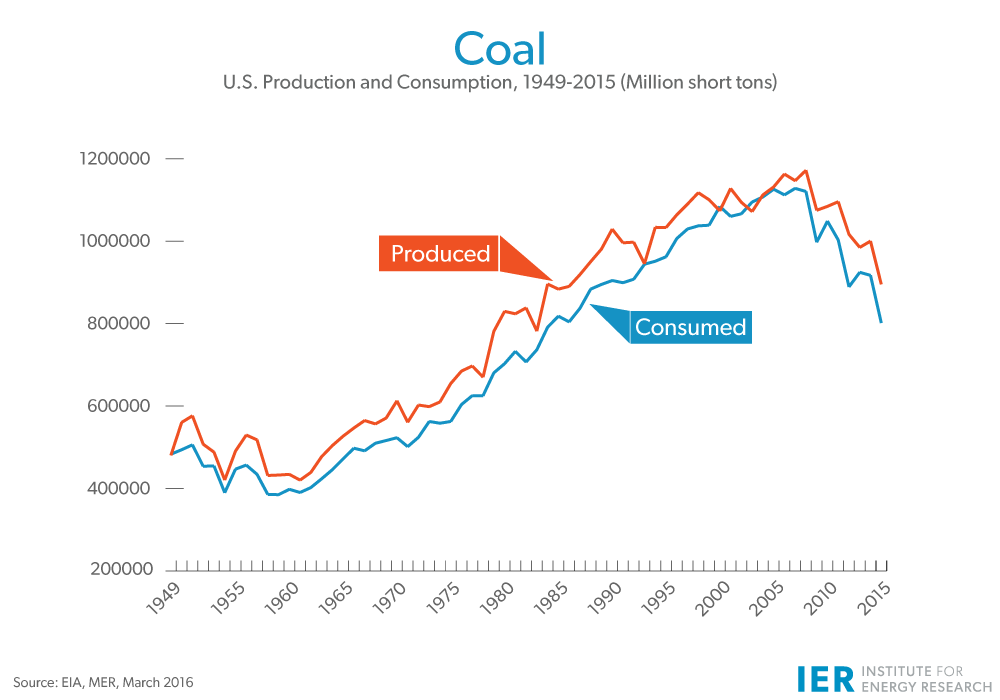 The Obama Administration’s “War on Coal” has imposed $312 billion in costs and over 30 million paperwork burden hours through EPA and Department of Interior regulations. For example, the Clean Power Plan, coal residuals rule, the Mercury and Air Toxics Standard, and Cross-State Air Pollution Rule will impose nearly $20 billion in annual burdens on the industry, causing many coal companies to file for bankruptcy protection. In 2016, Peabody Energy, Arch Coal and Alpha Natural Resources filed for Chapter 11 restructuring. The market capitalization of four of the largest U.S. coal companies was over $35 billion in 2011, but declined by 99 percent by 2016.[vii] (See chart below.) 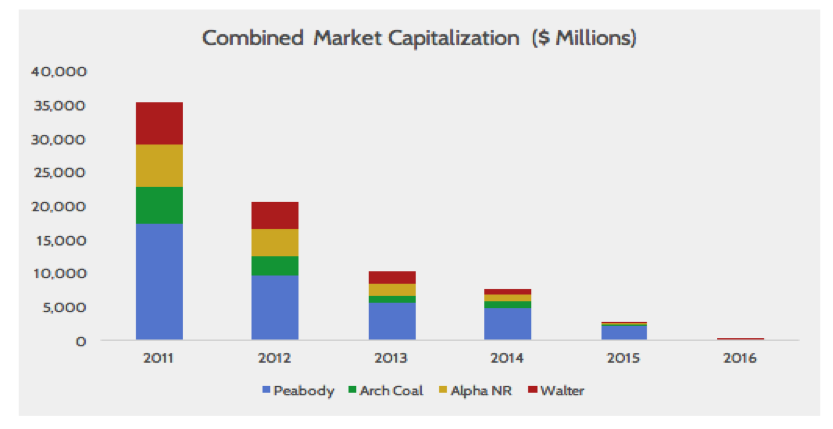 The U.S. coal industry is dying due to competition from natural gas and Obama administration regulations while China, a country that consumes 50 percent of the world’s coal, is building coal-fired power plants galore despite its Paris pledge. In 2008, President Obama told us, “If somebody wants to build a coal power plant, they can, it’s just that it will bankrupt them because they are going to be charged a huge sum for all that greenhouse gas that’s being emitted.” Now, many U.S. miners are out of work and the presumptive Democratic candidate for the U.S. Presidency, Hillary Clinton, intends to keep them unemployed—a sad state for American workers and the communities across the country who rely on coal mining for their economic well-being.