The Energy Information Administration (EIA) in its International Energy Outlook 2013 projects that China will remain dependent on coal as its major generating technology through 2040 via the construction of 527 gigawatts of new coal-fired generating capacity over the 30 year projection period, almost doubling its current coal-fired generating capacity. In 2010, China generated 77 percent of its electricity using coal; by 2040, EIA projects that coal’s share of China’s generating market will drop to 63 percent, but that it will still remain the major supplier of electricity in the country. (See graph below.)

Hydroelectric power also loses share in China’s generating market, from 18 percent in 2010 to 12 percent in 2040 despite adding 190 gigawatts of hydroelectric generating capacity. Hydro still remains the second largest generator in 2040, followed by nuclear power. China is expected to add 149 gigawatts of nuclear capacity over the 30-year projection period. Wind increases its share in the Chinese electric generating market with an additional 246 gigawatts being constructed by 2040, but its 2040 generation share is at only 5.5 percent, up from 1.1 percent in 2010. China is constructing more than twice as much coal capacity than wind capacity over the 30 year projection period. 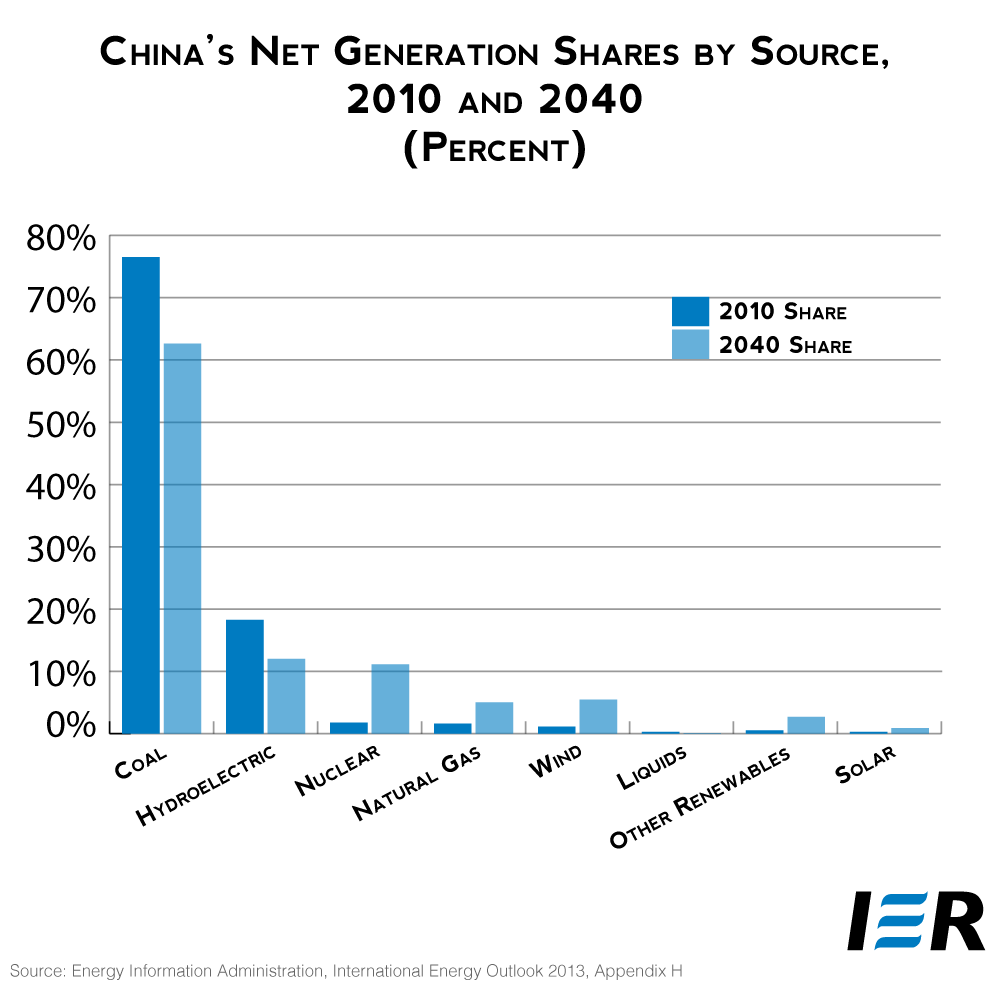 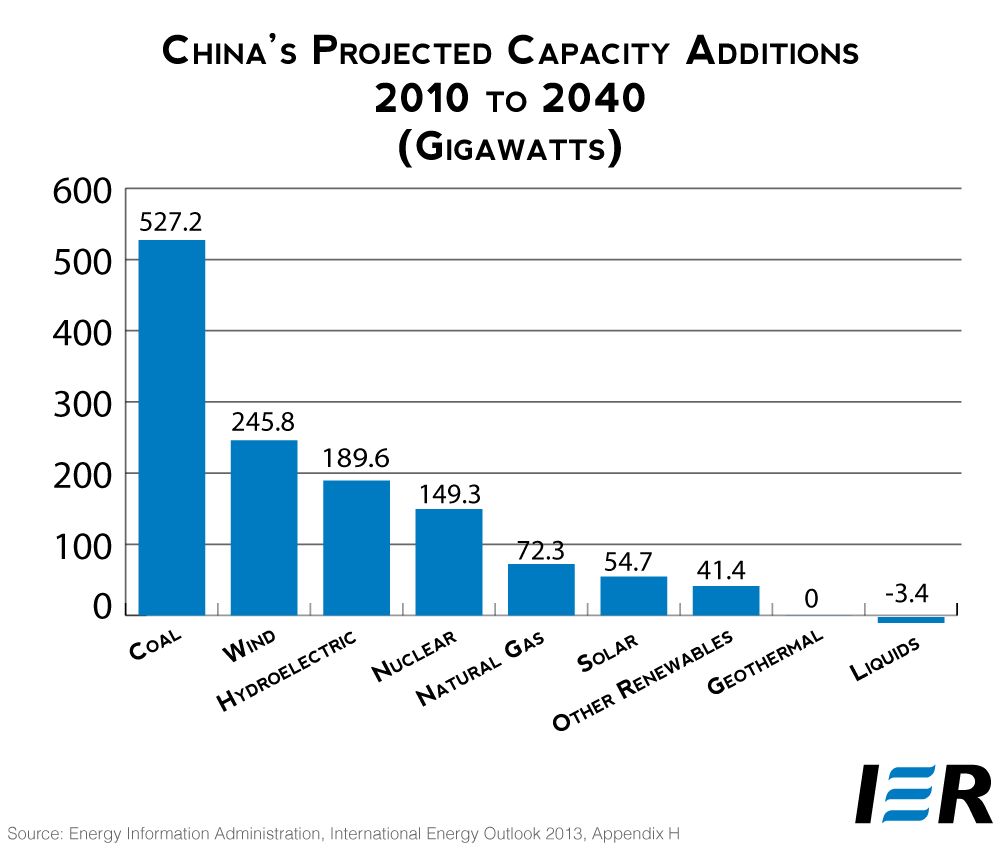 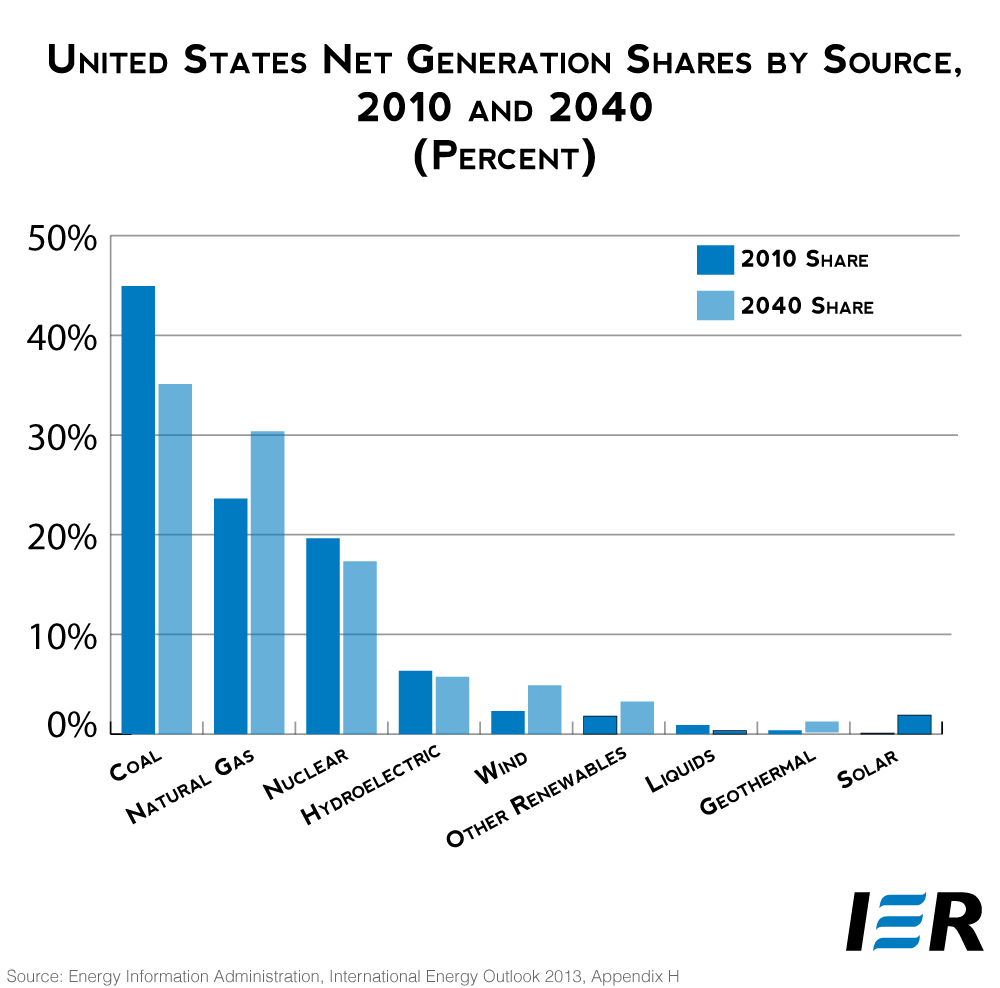 China has been among the world’s fastest growing economies for the past two decades. From 1990 to 2010, China’s economy grew by an average of 10.4 percent per year. Although economic growth in China remained strong through the global recession, its rate had slowed. In 2012, real GDP in China increased by just 7.2 percent, its lowest annual growth rate in 20 years.  The IEO 2013 forecast assumes that China’s real GDP will grow at an average rate of 5.7 percent per year through 2040. That is a faster growth than the average assumed for the world’s real gross domestic product (expressed in purchasing power parity terms), which rises by an average of 3.6 percent per year from 2010 to 2040. 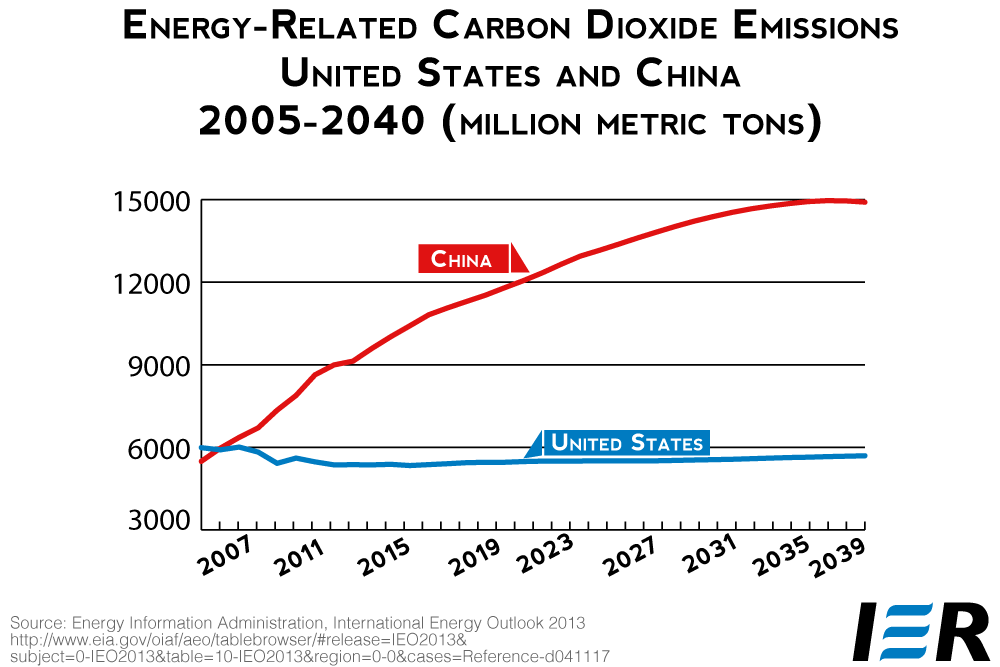 The IEO2013 projects a substantial increase in tight gas, shale gas, and coalbed methane. In the United States, increased natural gas production has been advanced by the application of horizontal drilling and hydraulic fracturing technologies, which made it possible to develop the country’s vast shale gas resources and contributed to a near doubling of total U.S. technically recoverable natural gas resource estimates over the past decade. In 2040, shale gas accounts for 50 percent of U.S. natural gas production. In China, tight gas, shale gas, and coalbed methane resources account for more than 80 percent of its total domestic production in 2040. The IEO predicts that natural gas consumption in China will increase by 360 percent from 3.8 trillion cubic feet in 2010 to 17.5 trillion cubic feet in 2040. While 40 percent less than natural gas consumption in the United States in 2040, it is a sizable increase from China’s current natural gas consumption.

Although liquefied natural gas trade has grown at a faster rate than pipeline trade worldwide in recent years, pipeline transportation of natural gas remains an integral part of world natural gas trade in the IEO2013. The IEO outlook includes several new long-distance pipelines and expansions of existing infrastructure, including large volumes of pipeline flows into China from both Russia and Central Asia. 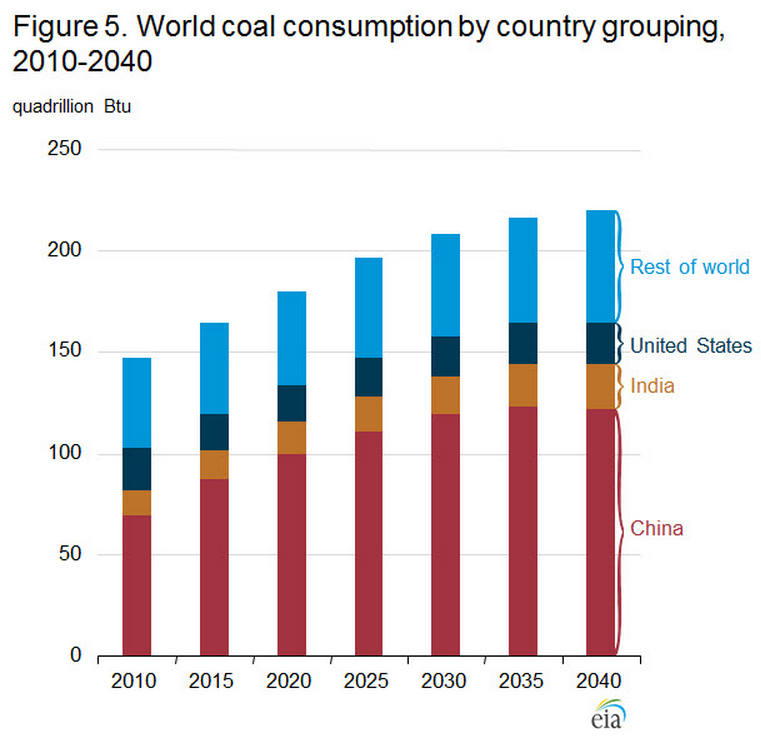 Energy use in the transportation sector includes the energy consumed in moving people and goods by road, rail, air, water, and pipeline. A strong increase in the demand for transportation fuels, particularly in the developing economies, where income growth and demand for personal mobility, combined with rapid urbanization, has the greatest impact on growth in world transportation energy use, keeps world oil prices high throughout the projection period. China leads the projected global growth in transportation liquids demand, more than tripling its consumption from 8 quadrillion Btu in 2010 to 26 quadrillion Btu by 2040. China’s transportation energy use was only one-third of that in the United States in 2010; by 2040, China is projected to consume about the same amount of energy for transportation as the United States.

In the latest International Energy Outlook, EIA is forecasting that China will be the major contributor to energy demand, coal consumption and production, and energy-related carbon dioxide emissions through 2040. China is also projected to be the largest economy in the world by 2017. The country has clearly taken steps to ensure that it has the energy needed to fuel its economic growth. And, despite the interests of the developed world in wanting China to use renewable fuels, it will be dependent on coal for a long, long time, emitting a third of the world’s energy-related carbon dioxide emissions in 2040, according to the EIA.