In 2000, Germany committed to cut its carbon dioxide emissions by 40 percent from 1990 levels by 2020. To achieve this ambitious goal, Germany planned to increase its use of renewable power sources and to take advantage of the country’s most commercially-viable source of carbon dioxide-free energy—nuclear power. But despite Germany’s goals a decade ago, they are now building coal-fired electricity generation and shuttering nuclear power plants. Germany has apparently realized two important lessons—coal provides low-cost, reliable electricity and switching to renewables is wildly expensive.

The ostensible reason for Germany’s course reversal on nuclear was the 2011 Fukushima nuclear accident. Immediately after the accident, Chancellor Angela Merkel shuttered eight nuclear reactors and ordered the phase-out of Germany’s remaining nuclear reactors by 2022. Merkel claimed that renewables, such as wind and solar, would be used to replace the nuclear-generated electricity, but renewables cannot fill the energy gap. According to the Breakthrough Institute’s Jessica Lovering, it would take at least ten years to replace the energy produced by Germany’s pre-Fukushima nuclear reactors with wind and solar—and even then, the country would need coal or natural gas plants for backup generation.

Solar and wind generation is increasing in Germany, but they are not reliable sources of energy. According to Bruno Burger, professor at the Fraunhofer Institute for Solar Energy Systems, German electricity generation from coal increased by 16.8 percent between 2011 and 2012. While Merkel sees wind and solar power as viable replacements for nuclear power, but neither power source is readily available 24/7.  This is because of the intermittent nature of wind and solar power—the sun does not always shine[1], and the wind does not always blow[2]. When wind and solar are not available, Germans would then be forced to turn to coal and natural gas to fill the energy gaps.  Electricity generated by nuclear power, however, is readily available 24/7.

The following graphs from The Energy Collective illustrate the intermittency problems associated with German wind production—its capacity for generation ebbs and flows throughout the day: 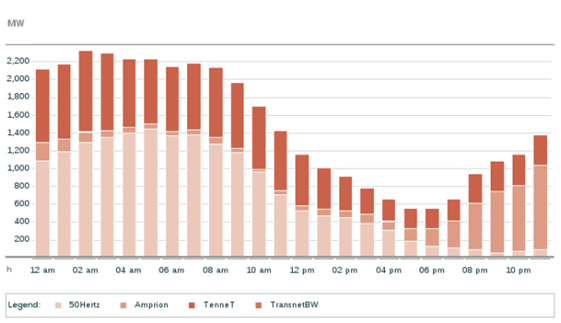 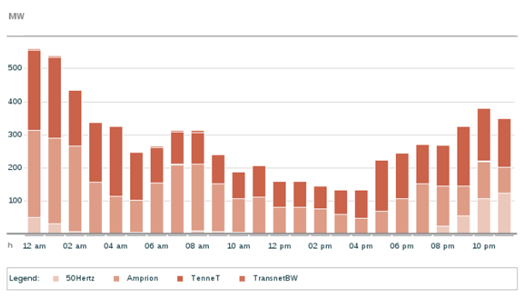 Merkel’s hasty decision to ban nuclear makes it difficult to achieve the country’s carbon dioxide emissions reduction targets. And Germany does not seem to be very serious about achieving those reductions.  According to Laszlso Varro, head of the gas, coal and power markets division at the International Energy Agency, the phase-out has already caused a 22.7 million ton[3] annual increase in carbon dioxide emissions, equal to the annual emissions from 4.4 million cars in a country of 80 million residents. Laszlo concludes this rise in carbon dioxide emissions is largely due to the new coal plants that have come online to meet the shortfall of power.

As we have previously explained:

Germany is building a large amount of coal-fired electricity generation. New coal-fired plants with a capacity of 5.3 gigawatts of electricity will come on line this year. In total, there are 10 new coal and lignite power plants currently under construction in Germany. While Germany talks about reducing carbon dioxide emissions, and provides large subsidies for renewables, the country is in fact expanding new coal resources, unlike the United States.

While Germany is building coal, the nuclear phase-out will likely still exacerbate unemployment and drive up electricity prices. One reactor is slated to close in 2015, with one in 2017, one in 2019, three in 2021, and three in 2022 to follow. The mandate will cost Germany 11,000 jobs in the medium term, according to E.ON, the world’s largest utility by sales. Affordable electricity will suffer, too. Christian Schulz, senior European economist at Berenberg Bank, estimated that the shutdown would increase energy costs by a fifth, which is particularly devastating since the German economy is heavily reliant on energy-intensive manufacturing. Germany’s electricity rates are already the second highest in Europe.[4] Residential electricity rates are 34 cents (U.S.) a kilowatt hour compared to an average of 12 cents in the U.S.[5]

By vowing to close its nuclear power plants and instead replace much of the generation with coal-fired generation, Germany is demonstrating that it is not serious about reducing carbon dioxide emissions. Given Germany’s already stratospheric electricity rates, there is no wonder Germany does not want to further drive rates higher, but instead will use low-cost, reliable coal to make sure the lights are kept on.

[3] The figure cited in the Nuclear Energy Institute Article is 25 million tons, but for the sake of consistency, IER converted tons to metric tonnes.

China Will Continue to Use Coal as a Major Generating Source