This change, however, will not be a coal renaissance in the electric power sector since new and pending regulations by the Environmental Protection Agency (EPA) will ensure no new coal-fired plants are built and older coal-fired plants will find it uneconomic to continue operating because of increasingly-stringent EPA regulations. 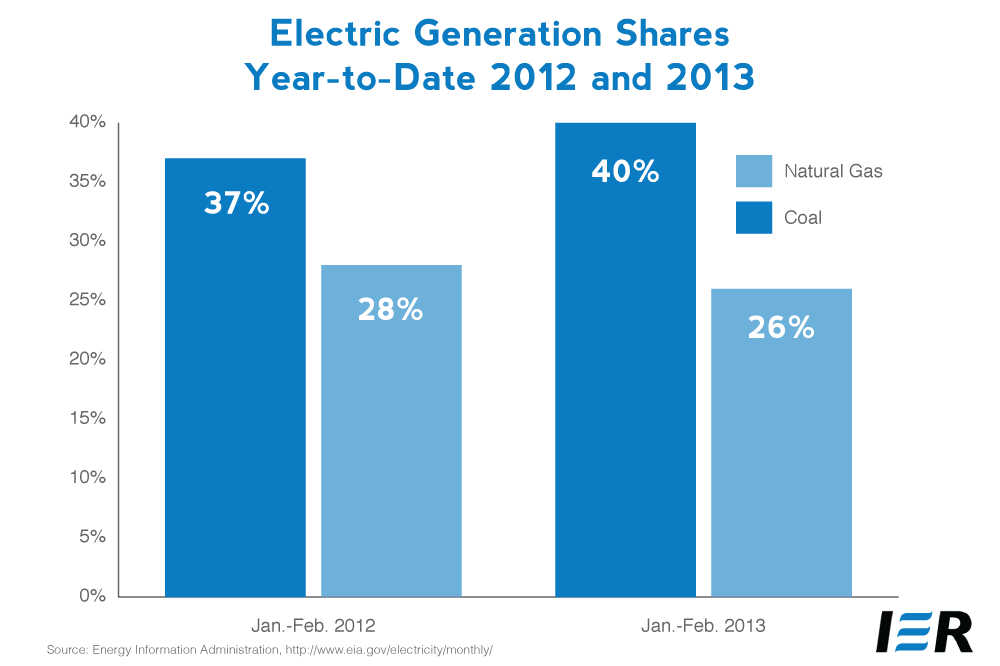 Some analysts are forecasting that coal may supply 40 percent of the power market for this entire year, up from 37 percent last year, while natural gas will supply 25 percent, down from 30 percent last year.[i] The Energy Information Administration in its Short Term Energy Outlook is agreeing with the coal share of 40 percent for 2013, but its forecast for natural gas generation is higher at 28 percent, although still lower than the 30 percent natural gas share achieved last year in the generation market. EIA does not see a renaissance to coal’s almost 50 percent share attained not long ago, forecasting a continuation of the 40 percent share of the generation market for 2014.[ii] That’s most likely due to EPA regulations, which reflect President Obama’s promise in 2008 to reduce carbon dioxide emissions and his later pledge to “look for other means” to control such emissions.

The Obama Administration’s EPA has promulgated new regulations that will result in the demise of the domestic coal generating industry. The new rules target mercury from coal-fired power plants (the Mercury and Air Toxic Standards), which many call Utility MACT because the rule requires “Maximum Achievable Control Technology” for mercury at coal-fired power plants. These technologies must be installed over a tight 3-year period between 2012 and 2015, raising the cost of generating power from existing coal-fired plants where the economics make sense to install the technology, or force plants to retire or to convert to natural gas where the economics of adding the additional environmental technology are not favorable.

The National Economic Research Associates found compliance costs to be $21 billion per year and lost jobs to amount to 183,000 per year. Because the increased costs will be passed to consumers through higher electricity rates, businesses will be forced to reduce jobs as well. Studies project that retail electricity prices will increase between 10 and 20 percent in most of the country and over 20 percent in the coal-dependent states in the Midwest.[iii] 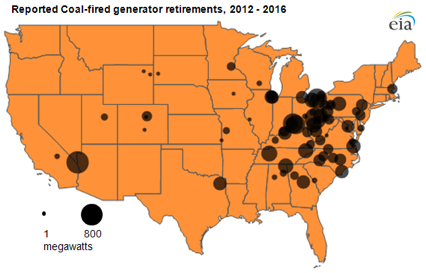 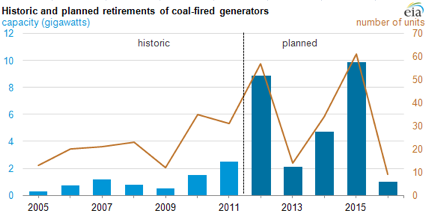 EIA’s numbers are based on current utility expectations. The Edison Electric Institute expects a larger number of forced retirements—about 48 gigawatts of coal-fired units at 231 plants—between 2010 and 2022, or about 15 percent of the coal fleet.[v]

Further, pending greenhouse gas regulations will require all new coal-fired plants to reduce their greenhouse gas emissions even though there is no cost effective way to do so. This is essentially a ban on new coal-fired plants because the technology does not exist commercially for them to meet natural gas carbon dioxide levels that are required by the EPA regulation.

The coal industry has already taken action to improve air quality and new coal plants are cleaner than ever before. Pollution control technologies such as flue gas desulfurization, selective catalytic reducers, fabric filters, and dry sorbent injection have greatly reduced coal plant emissions. These advances in technology have enabled large improvements in air quality. Since 1970, the total emissions of the six criteria pollutants have declined by 68 percent, even though energy consumption has increased by 45 percent and the economy has grown by 212 percent.[vi] (The “criteria pollutants” are carbon monoxide, lead, sulfur dioxide, nitrogen oxides, ground-level ozone, and particulate matter.) The following chart from EPA shows the increase in economic measures compared to the decrease in pollution emissions.[vii] 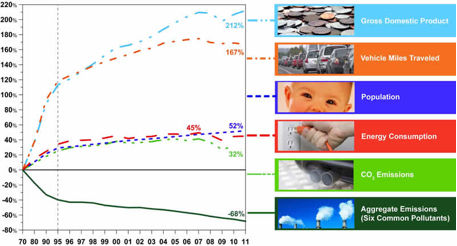 Two factors have and are affecting coal-fired generation: natural gas prices and new and pending regulations from the EPA. Recent data have shown the effect that these factors have on the generation market. The higher prices of natural gas at around $4.50 per thousand cubic feet delivered to electric utilities this year is making coal more cost competitive compared to natural gas, but new and pending EPA regulations are likely placing a ceiling on the amount of generation one can expect to get from coal– at around a 40 percent share.