While the war on coal is working, reducing coal generation and consumption and associated carbon dioxide emissions here in the United States, many world economies are looking towards coal for future generation needs. China, India, Russia, and Germany, to name a few, are building coal-fired power plants. Worldwide coal plant construction grew 5.4 percent over the past year and now represents about 30 percent of installed capacity. According to the World Resources Institute, almost 1,200 coal-fired power plants are in the planning stages (a capacity of 1.4 million megawatts) and over three-quarters of them are to be built in China and India, where over 500,000 megawatts each are currently planned for construction.[i]  (See chart below.) 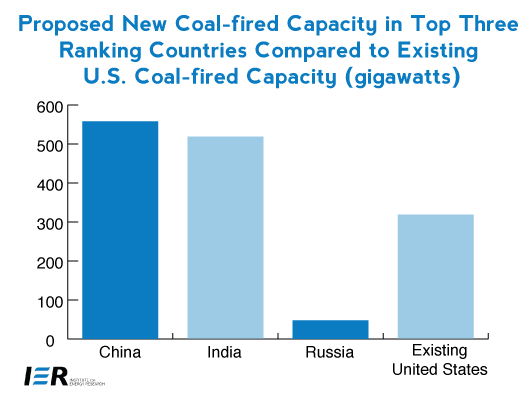 Further, many of these countries, China and India in particular, can no longer produce enough coal for their needs and must import coal. In 2010, world coal trade increased by 13.4 percent, reaching 1.08 billion metric tons. The chart below compares coal production and consumption for the top 5 ranking countries in 2011, showing that China consumed over 4 times the amount of coal that the United States consumed and that India consumed almost 80 percent of U.S. coal consumption. The International Energy Agency expects that India will overtake the United States in coal consumption by 2025 and will be the largest net importer of coal by 2020 as the country tries to supply reliable power to its populace, many of whom do not have access to electricity.[ii] 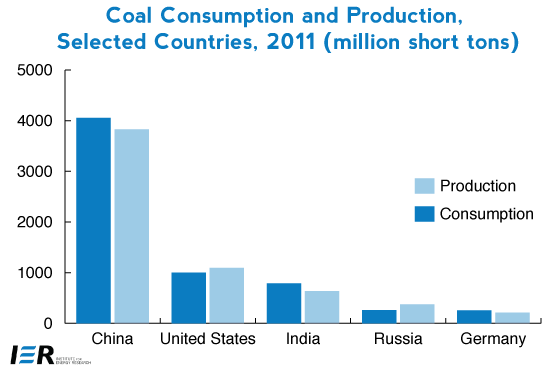 According to the World Coal Association, coal’s global share of primary energy consumption rose to 30.3 percent in 2011 from about 25 percent, where it had been for years, and generated about 42 percent of the world’s electricity. Coal’s global resurgence is due in part to the shale gas boom that lowered natural gas prices, making gas more competitive with coal, and pushing coal prices down on world markets.

Coal’s recent global renaissance, with the world’s highest consumption for the fuel since 1969, is not just due to Asian countries. In the United Kingdom, for example, coal consumption increased by nearly a quarter between the second quarter of 2011 and the second quarter of 2012. Germany is encouraging the construction of 10 gigawatts of coal-fired generation to replace its nuclear plants and provide back-up power for its wind and solar units, which require backup when the wind isn’t blowing or when the sun does not shine.

Europe overall burned more coal in the past year than any time since it pledged cuts to greenhouse gas emissions. Besides coal’s low cost, the price of carbon permits in Europe is also very low due to their large supply and low demand, making coal an economic choice for electricity generation.[iii] Natural gas prices in Europe are high because of politically expedient deals that coupled the price of Russian gas imports to the price of oil.  In contrast, the shale gas boom in the United States decoupled oil and gas prices, driving natural gas down to near record levels.[iv]

Coal’s Future in the United States

Coal generation’s share in the United States has declined from around 50 percent to an estimated 37 percent for 2012. The reasons for its decline are twofold: low-cost natural gas is edging out coal for generation and the Environmental Protection Agency is producing onerous regulations that will retire many old coal-fired power plants and/or add substantial costs for their compliance (Utility MACT), and make it impossible to build new coal-fired power plants with existing technology (Carbon Pollution Standard). To build a new coal-fired plant, carbon capture and sequestration technology will be required, but that technology does not exist on a commercial scale today.

The Energy Information Administration estimates that 175 coal-fired units are scheduled to be shut down between 2012 and 2016—a total of 27 gigawatts of electrical capacity that powers 27 million homes.[v]  The Brattle Group in a recent study estimates that between 59 gigawatts and 77 gigawatts of coal-fired capacity is likely to retire rather than be retrofitted with additional environmental equipment.[vi] The Federal Energy Regulatory Commission finds 81 gigawatts of shuttered coal-fired capacity to be “likely”.[vii] These units will be replaced with more expensive forms of energy, since any new plant will have to absorb its capital as well as operational costs.  Electricity rates will likely  skyrocket due to the need to replace the retiring coal-fired capacity with new approved technology.

The closing of these coal-fired power plants threatens thousands of the 555,270 direct and indirect coal-related jobs that pay $36 billion in wages. Coal employees are already entering the ranks of the unemployed in the United States. Alpha Natural Resources is scaling back its coal production and eliminating 1,200 jobs, including 400 jobs that were terminated as a result of immediate mine closures in Virginia, West Virginia, and Pennsylvania. The company indicated that the action was due to “a regulatory environment that’s aggressively aimed at constraining the use of coal.” Over 100 coal miners in Boone County, West Virginia, were laid off in November. Ohio American Energy, Inc., announced it would close its coal mining operations in Brilliant, Ohio, citing regulatory actions for the mine’s closure and warning that more layoffs would come. GenOn announced it would shutter 13 percent of its generating capacity by 2015 due to new environmental regulations. First Energy announced the early retirement of six plants located in Ohio, Pennsylvania, and Maryland due to the high cost and uncertainty associated with new EPA regulations.[viii]

According to Milton Catelin, chief executive of the World Coal Association, global coal use is likely to continue to increase, and could help to lift people out of poverty. China and India are planning to use coal to do just that. According to the International Energy Agency, coal consumption has increased by 8.4 percent in the developing countries. Other countries see coal as an economic choice with both Germany and the United Kingdom increasing its use. Unfortunately, for Americans – with the largest supplies of coal in the world — new and onerous regulations are forcing the coal industry to lose share in the U.S. electric generation sector, reduce its consumption, and force many Americans into unemployment.  Other countries are using coal to lift their citizens out of poverty, while the United States is impoverishing its people by criminalizing the use of coal.