Hydraulic fracturing allows for the production of oil and natural gas in shale rock that tightly holds oil and natural gas resources. To hydraulic fracture the shale, water, sand, and chemicals are pumped underground to break apart the shale rock and release the oil or natural gas. (See chart below.) Today, 9 out of 10 gas wells in the United States[i] are hydraulic fractured and its use along with horizontal drilling has created a natural gas boom in this country resulting in relatively low natural gas prices, particularly compared to gas prices elsewhere in the world. But, the federal government wants to increase these prices by imposing additional regulation for drilling on federal and Indian lands.

Currently, federal lands are already regulated by the states in which the wells are located.[ii] Many of those states already require drilling companies to disclose the chemicals used in the extracting process.[iii] Although hydraulic fracturing has been used by natural gas and oil companies for more than 60 years without one confirmed case of groundwater contamination, the federal government wants to increase its role, slow down the drilling process, and increase the cost of these fuels by regulating the technology further.

The diagrams below put shale gas in perspective compared to other natural gas sources in terms of their location and growth potential.  Besides shale gas, an unconventional source of natural gas, other sources are conventional natural gas, both freely occurring and associated with oil production, and other forms of unconventional natural gas found in tight sand formations and as coalbed methane, methane produced from coal seams.  Coalbed methane is formed during the geologic process that transforms organic material into coal. (See chart below.) 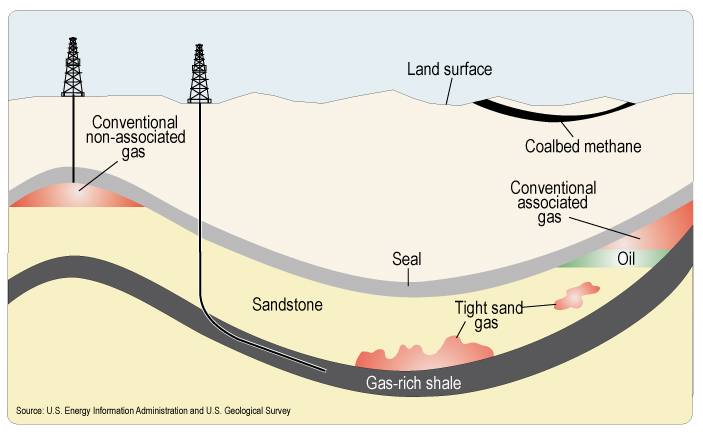 Offshore natural gas production is expected to decline by 0.8 trillion cubic feet from 2010 through 2014, due to the Obama Administration’s 2010 moratorium on offshore drilling after the oil spill accident in the Gulf of Mexico, and as near-term exploration and development activities in the Gulf focus on oil-directed activity. After 2014, offshore gas production is expected to increase slightly throughout the remainder of the projection period as the forecast assumes current laws and regulations will continue throughout the forecast period. 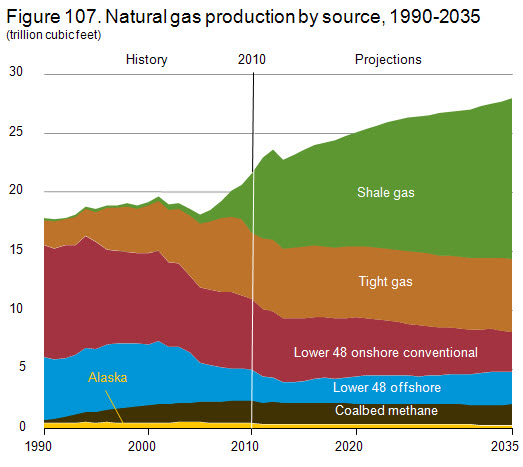 The current boom and the expected continued dominance of shale gas are benefiting communities that are utilizing those resources in the United States. For example, according to the Bureau of Economic Analysis, the shale gas industry helped the Williamsport metropolitan area in Pennsylvania achieve the seventh-fastest-growing economy in the United States in 2010, with new hotels, restaurants and bars sprouting up. The Pennsylvania State University system increased its efforts to train local workers, educating 7,000 students in short courses since 2009 and expanding two- and four-year degree programs.[vi]

Similarly, shale oil production has made North Dakota the second largest onshore producer of oil in the United States, second only to Texas. According to government statistics, North Dakota’s state domestic product is growing at 7 percent and its unemployment rate is at 3 percent all due to its use of hydraulic fracturing to produce shale oil. North Dakota recently surpassed both Alaska and California in its production of oil.[vii]

The hydraulic fracturing revolution has created 1.7 million jobs in oil and gas fields, equipment manufacturing, legal and information technology services, and other sectors. According to a Global Insight analysis, it is expected to generate over $60 billion this year in state and federal tax and royalty revenues, reduce America’s oil import bill by $75 billion, and save $100 billion in imported liquefied natural gas.  And, according to Citigroup’s Energy 2020 report, an American oil and gas industry could add “as many as 3.6 million jobs by 2020, and increase the U.S. gross domestic product by as much as 3 percent.”[viii] Further, according to the International Energy Agency, hydraulic fracturing and shale oil production could make North America energy independent in the future and turn the United States into the world’s number one oil producer in just 5 years.[ix]

Movies and other news media have shown burning tap water in homes near shale gas wells indicating that hydraulic fracturing was causing the problem. But, what watchers of those movies and readers of those articles are not told is that hydraulic fracturing zones are thousands of feet below groundwater supplies and production wells are sealed with cement and steel casing that extends hundreds of feet below the surface. Further, sensitive instruments monitor down-hole activity to ensure that the gas does not escape into near-surface formations or the atmosphere.

These media sources also claim groundwater contamination because of the chemicals that are mixed with water and sand into the bore hole. However, the chemicals used, 0.5 percent of the mixture, are chemicals that fight bacterial growth, keep sand particles suspended and improve production and the vast majority of them can be found in household items that we use safely every day, including cheese, beer, canned fish, dairy desserts, shampoo and cosmetic products. Further, heavy plastic liners are now common under drilling rigs, storage tanks and containment pits that make chemical or salt contamination of groundwater far less likely than from winter salting of icy roads.

The media also likes to tout the large amount of water needed in shale oil and gas production. In response to the cost of using large amounts of water, drilling companies have changed the composition of hydraulic fracturing fluids to address concerns about water use and wastewater disposal and have increasingly recycled the water they use so that far less water is used in hydraulic fracturing than in producing ethanol from corn.

Another recent claim from media is that hydraulic fracturing causes earthquakes, which was particularly touted this last winter in Ohio.[x] However, the cracking of fracturing shale rock measures only around 0.8 on the Richter scale, which is about the same amount caused by a passing car. This compares to a level 3 caused by loaded dump trucks, which is the minimum level that can be felt by humans, and a level 5 where property damage can occur.[xi]

Hydraulic fracturing is already subject to multiple state and local regulations and through these and with cooperation from the industry, refinements and improvements in rules and practices have been occurring for decades. Since 1949, over one million cases of hydraulic fracturing here in the United States and many more worldwide have not caused any serious harm. So, why must the federal government need to increase its presence in this area, costing taxpayers more in the administrative process of overseeing the industry and adding more red tape and processing time for industry to do the job that they have been trained and experienced to do, providing us with much needed energy. Fossil fuels will dominate our energy future for longer than forecasters can predict energy supply and demand, so denying that fact and restricting their use through even more regulations will only cause Americans financial and comfort hardships.