From data reports provided to the Energy Information Administration (EIA), about 16 gigawatts of generating capacity will be retired in 2015, of which nearly 13 gigawatts is coal-fired. The coal-fired capacity will be retired primarily because of EPA’s Mercury and Air Toxics Standards (MATS), which requires coal- and oil-fired electric generators to meet stricter emissions standards by incorporating emissions control technologies or retire the generators. Most of the retiring coal capacity (8 gigawatts) is in the Appalachian region–Ohio, West Virginia, Kentucky, Virginia, and Indiana—where job losses have already occurred. [i]

Note that the capacity values in this graph are net changes, i.e. capacity additions minus retirements.

The additions reported by electric generating companies to EIA following the trend of recent years are dominated by wind (9.8 gigawatts), natural gas (6.3 gigawatts), and solar (2.2 gigawatts). The wind capacity additions are mostly in the Plains states, with almost 8.4 gigawatts (85 percent) of total wind additions located between North Dakota and Minnesota in the north, to Texas and New Mexico in the south. Solar capacity additions larger than one megawatt are mostly located in California totaling 1.2 gigawatts. California and 28 other states have a renewable portfolio standard (RPS) requiring a specified amount of qualified renewable generation. These solar figures do not include small-scale installations such as residential rooftop solar photovoltaic systems.

Natural gas capacity additions are located throughout the United States, with Texas adding more than double any other state (1.7 gigawatts or 27 percent of total natural gas additions) in 2015. The Tennessee Valley Authority’s Watts Bar 2 nuclear facility (1.1 gigawatts) in southeastern Tennessee is expected to come on line in December 2015. It will be the first new nuclear reactor brought online in the United States in nearly 20 years.

The capacity of the coal-fired units retiring this year is over 3 times the amount that retired last year because EPA’s MATS requires that they add emissions control technologies this year, although some units have been granted extensions to operate through April 2016. EIA expects an additional 5.2 gigawatts of coal retirements in 2016.[ii] If adding emissions control technologies is cost-prohibitive, operators of generating units will retire their units instead. MATS require significant reductions in emissions of mercury, acid gases, and toxic metals.[iii] It should be noted that, according to EPA, the benefits of reducing mercury and air toxics total $500,000 a year, but the rule costs $9.6 billion a year. [iv]

Despite the 21 gigawatts of coal-fired retirements between 2009 and 2014 that EIA has recorded, coal remains the number 1 generating source in the United States with a 39 percent share, followed by natural gas and nuclear. (See graph below.) 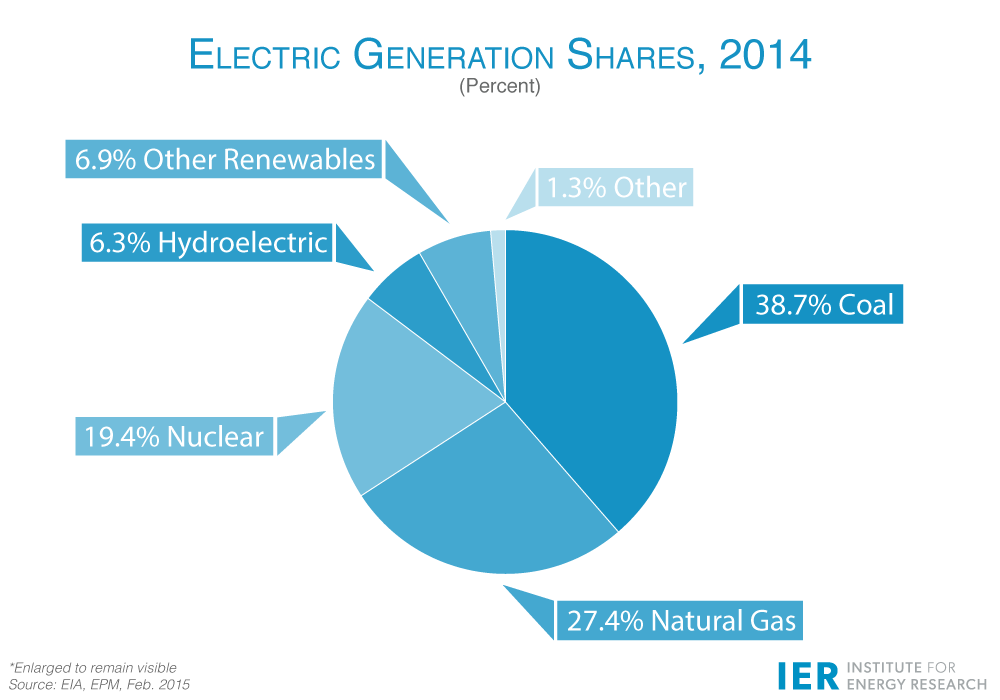 President Obama and his EPA are living up to the President’s proclamation in 2008, “So, if somebody wants to build a coal plant, they can – it’s just that it will bankrupt them.”[vi]  But the EPA is not just dealing with new coal-fired power plants, but existing coal-fired plants as well. The MATS regulation is just the beginning with over 39 gigawatts of coal-fired plants being retired.

EPA released its proposed rule mandating carbon dioxide emission cuts for existing power plants on June 2, 2014. This rule is designed to comply with the president’s plan to make electricity rates “necessarily skyrocket” by reducing the use of coal-fired electricity generation from existing power plants—one of the cheapest sources of electricity generation. EPA is mandating the reduction of carbon dioxide emissions from the power sector by 30 percent from a “2005 baseline” by 2030. The proposed rule provides each state with a target and a set of options that EPA has determined will allow them to reach their assigned requirements. While the rule will result in increasing electricity rates, the rule will not have any material climate benefit despite the fact that the climate is the justification for the rule. EPA’s climate model calculates that the temperature reduction from the proposed rule to be a mere 0.018 degrees Centigrade by 2100.[vii]

EPA also issued a proposed rule limiting carbon emissions on new power plants. The rule limits carbon dioxide emissions from new coal plants to 1,100 pounds per megawatt-hour, although the average current coal-fired power plant emits close to 1,800 pounds. The EPA justifies these numbers by suggesting that new coal-fired plants can meet the limit by installing carbon capture and sequestration technology. However, that technology is not commercially available, meaning no new coal-fired plants will be built.[viii]

[v] Energy Information Administration, 27 gigawatts of coal-fired capacity to retire over the next 5 years, July 27, 2012, http://www.eia.gov/todayinenergy/detail.cfm?id=7290