Earlier this month, employees at coal plants in West Virginia, Ohio, and Indiana received notices from American Electric Power that the plants will be closing by the end of May primarily due to the Environmental Protection Agency’s (EPA’s) newly implemented Mercury and Air Toxic Standards (MATS)—and more pink slips are expected to be issued in the coming months. The rule has already led to a slew of preemptive power plant closures across Appalachia and the Midwest since it was first announced in 2011. A pending Supreme Court case will determine if the EPA has the authority to mandate emission standards without measuring costs associated with the closure of power plants, including job losses and higher electricity bills. But regardless of how that case turns out, the MATS deadline of April 16 has already passed, and utilities have already made plans to close these plants.

Compliance with the MATS requires expensive retrofitting of existing coal-fired units, therefore many older power plants have been retired rather than upgraded. The Energy Information Administration estimates that the rule will contribute to a net loss of 16 gigawatts of electric generation in 2015, with 80 percent due to the retirement of coal power plants. That’s enough to supply power to nearly 13 million Americans—with many more closures on the way.

The Case Against MATS

In January, 21 states and two industry groups filed briefs in their lawsuit against MATS, alleging that the standards are not “appropriate,” as the EPA did not adequately measure costs before imposing the rule. During oral arguments before the Supreme Court last month, the U.S. solicitor general, arguing on behalf of the EPA, admitted that the agency only considered potential costs after it had decided to pass the regulations.

The Court, expected to issue a ruling by June, will rule if it is “appropriate” to mandate a regulation if costs are ignored. The outcome of the case will determine both the future of MATS and the Cross State Air Pollution Rule (CSAPR), another regulation that requires a further reduction in emissions from coal-fired power plants.

The EPA’s cost-benefit analyses of proposed regulations are notoriously poor. The inflated figure of $30-90 billion in health savings the MATS will supposedly create consist mainly of “co-benefits” and not from reducing mercury—the point of the rule itself. The benefits exclusive to the reduction of mercury and hazardous air pollutants are only projected reach $4-6 million annually, and are based on heavily criticized data.

The compliance cost of the MATS is conservatively estimated by the EPA to be $10.6 billion in 2015 alone. These compliance costs will be passed on to ratepayer through higher electricity rates. The economic consequences of these regulations are hardly isolated to the energy sector—the disruption of labor markets, increased energy bills, and a less-reliable energy grid are all expected side-effects of any clean air plan. 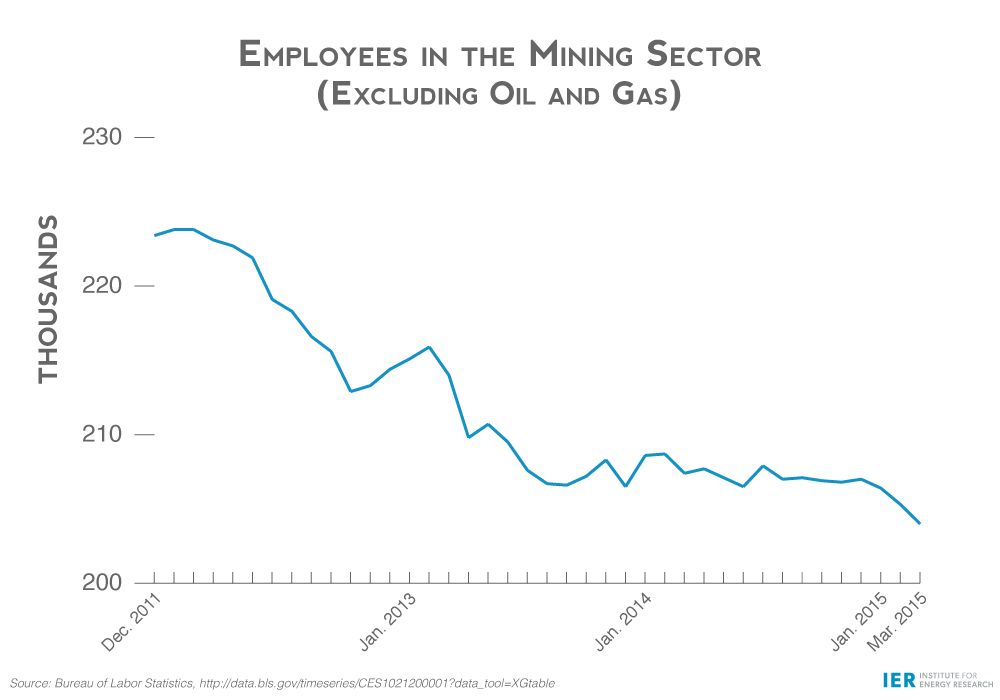 The combined impact of MATS and CSAPR will shutter dozens of power plants over the next decade, leading to the loss of jobs at power plants and the miners who supply them. Over 26,000 mining jobs have been lost since MATS was announced in December 2011, hitting a 12-year low in February 2015. These losses may accelerate, as the closure of coal plants will peak in April and June 2015. The loss of employment for all affected sectors is estimated to reach 1.4 million jobs by 2020, adding an unnecessary strain on an already slowing jobs recovery.

The average retail price of electricity rose 6.3 percent from 2011 to 2014, a rate higher than inflation. Families diverting more of their income to utilities will have less to spend on food and healthcare, both of which have become more expensive in recent years. Those costs will disproportionately affect low-income Americans, as utility bills make up a higher proportion of their total budget.

States’ budgets will take a hit due to MATS as the taxes paid by coal-fired plants will be lost as the regulations are phased in. The Kanawha River units in West Virginia, scheduled to shut down due to the MATS rules, pay an estimated $3.66 million in taxes annually. While the tax base shrinks, states will be expected to spend more due to higher unemployment and more expensive energy bills.

Higher energy bills could also force more Americans on to the Low Income Home Energy Assistance Program, while increased job losses could cause more Americans to apply for unemployment insurance and other means-tested welfare programs.

Everyday Americans will bear the brunt of the costs associated with the MATS and CSAPR rules as electricity rates increase. Congress should re-examine the language in the Clean Air Act to require EPA to consider economics costs in implementing environmental regulations. After all, more wealth leads to better health, and improving health is supposed to be the point of the Clean Air Act. Considering the already-anemic economic recovery, the impact of regulations on jobs and the cost of increased energy bills should be taken into account when developing new rules.

License to Kill: Wind and Solar Decimate Birds and Bats