In December the United Nations will convene in Paris, for the purpose of hammering out an international agreement on climate change. Last month the UN Framework Convention on Climate Change distributed draft language to serve as options for the agreement that may be decided in December. In this post I’ll show that the “Negotiating Text” proposed climate change goals that can’t be justified, using the UN’s own reports. Furthermore, we see yet more evidence that such agreements will carry top-down economic planning that serves to advance reformers’ social goals far beyond an alleged climate problem.

To reiterate, the document that has been released to the public contains many options for the representatives who will meet in December. However, most of what I quote in this blog post is repeated in various forms in the options presented; the passages in this post fairly represent the spirit of the text.

The overriding purpose of the proposed agreement is for signatory parties to put the world on a path to greenhouse gas emission trajectories that will, according to the Intergovernmental Panel on Climate Change (IPCC), limit global warming (relative to preindustrial times) to at most 2 degrees Celsius, but possibly as little as 1.5 degrees Celsius. The Negotiating Text doesn’t try to justify these goals—certainly not by showing they somehow pass a cost/benefit test—but merely takes it for granted that the science contained in the latest IPCC report shows that a 2°C (at most) cap is necessary to “prevent dangerous anthropogenic interference with the climate system” (p. 6).

Ironically, the IPCC’s reports don’t actually justify a 2°C ceiling on global warming, let alone a 1.5°C limit. In a previous IER post, I used the latest IPCC report itself to show that the economic costs of meeting a 2°C ceiling would likely exceed the avoided climate change damages. Specifically, according to the IPCC’s AR5 report, the economic cost of limiting the globe to 2°C of warming would be around 3.4 percent of global consumption in 2050 and 4.8 percent in 2100. Such a level of economic cost from restrictions on emissions is higher than the climate change damage that those restrictions would prevent, according to the actual damage estimates under various scenarios contained in the IPCC’s AR5 report. (Refer to my earlier post for full details.)

To be sure, there are plenty of scientists working on climate change issues who would say that it is a perfectly reasonable goal to limit global warming to 2°C. But the thing is, this is not a question that can be answered by physics and chemists. No, to understand whether a proposed government policy makes sense, it’s important (among other criteria) to see whether its benefits outweigh its costs. The irony here is that the UN goes through the farce of bringing in economic modeling to the operation, but then never actually tries to justify its proposed solutions on the very terms it invited. They merely pay lip service to the economics, making it look as if they’ve covered their bases, but the actual policy goals people have taken from the IPCC reports do not follow from the very models that are summarized within these reports.

Not Even Close When It Comes to More Aggressive 1.5°C Goal

Now if the 2°C ceiling is bad, the 1.5°C ceiling is ridiculous. (To remind the reader, the UN’s proposed Negotiating Text lays out these two options as possible goals for the actual treaty they hope will be finalized in December in Paris.) Here are the damage estimates from global warming from the three computers models chosen by the Obama Administration when it estimated the “social cost of carbon”: 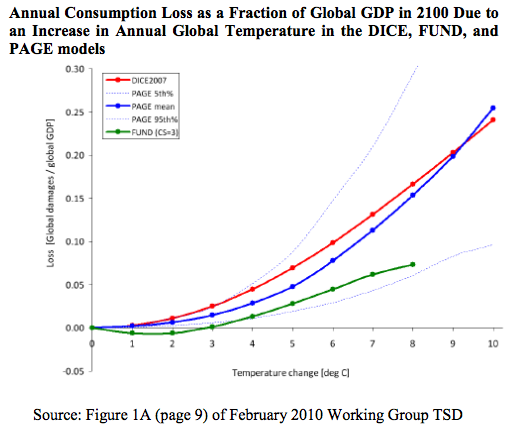 There is a more complete explanation in IER’s Comment on the social cost of carbon (pp. 5-6), but for our purposes let me draw your attention to the section of the graph halfway between 1 and 2 on the x-axis. The red and blue lines indicate the damages from 1.5°C of global warming, and just eyeballing it they are less than 1 percent of global GDP. (Recall from our discussion above that the hit to the economy from complying with this constraint is higher, whether we consider the year 2050 or 2100.

And looking at the green line—which refers to Richard Tol’s FUND model—we see in the chart above that 1.5°C of warming would actually maximize the benefits to humanity. In other words, one of the computer models chosen by the Obama Administration to estimate the damages from global warming found that 1.5°C of warming would be great—we wouldn’t want to get less than that even if we could do so for free.

But of course, it is not free to drastically slash greenhouse gas emissions. Indeed, William Nordhaus’ DICE model—which is the red line in the chart above—in its 2008 calibration (on which I published a journal article here) estimated that a 1.5°C cap on global warming would make humanity $14 trillion worse than doing nothing about climate change. (See Table 4, page 211 of my paper.) To be clear, William Nordhaus is not a “denier” but in fact is one of the pioneers in climate change economics. Even so, as of his 2008 calibration Nordhaus’ model showed that a cap of 1.5°C would cause far more economic losses than it would spare in climate change damage.

So to sum up, the UN’s suggested text for a December treaty recommends either a 2.0°C or a 1.5°C ceiling on global warming. Neither can be justified quantitatively because the costs of the reductions far exceed the climate benefits if we use the very models and estimates contained in the UN’s IPCC reports. Moreover, the harsher ceiling of 1.5°C is so aggressive that leading computer models chosen by the Obama Administration estimate that its adoption would make humanity trillions of dollars worse off than the status quo. Their own suggested solution to their own stated problem makes no sense, according to their own data.

There is an interesting fairy tale being spun by certain Washington think tanks to the effect that all these environmental activists really want is a solid cap on global warming. That’s why, these folks claim, if conservatives would just go along with a carbon tax, then we could get rid of all sorts of other “green” subsidies and regulations.

To show that such talk is indeed a fairy tale, consider the following two excerpts from the UN Negotiating Text:

[Option 1: Parties to cooperate, including through regional approaches, bilateral, multilateral, triangular / South–South and triangular cooperation, and to take appropriate measures to develop, adopt and implement policies, strategies, regulations and/or action plans on climate change education, training, public awareness, public participation and public access to information at all levels so as to enable transformative change towards low-emission and climate-resilient societies… [UNFCCC Negotiating Text, p. 8]

[Stressing that all actions to address climate change and all the processes established under this agreement should ensure [a gender-responsive approach][gender equality and intergenerational equity], take into account [environmental integrity][the protection of the integrity of Mother Earth], and respect human rights, the right to development and the rights of [youth and] indigenous peoples, [as well as ensure a just transition of the workforce and the creation of decent work, in accordance with nationally defined development priorities and strategies,]] [UNFCCC Negotiating Text, p. 4, bold added.]

This is hardly the language of people who just want a treaty to cut back on emissions. No, Naomi Klein hit the nail on the head when she proudly announced that she finally embraced the climate change policy bandwagon once she realized it suited her pre-existing political agenda.

The UN has released the Negotiating Text of the possible treaty that may come out of talks in Paris in December. The irony here is that neither of the two policy options it recommends can be justified with the very models summarized in the UN’s “consensus” reports. Furthermore, even skimming the document should alert any reader that this treaty is about more than just slowing global warming—it is about achieving a whole spectrum of interventionist social goals.

As U.S. Shutters Coal Plants, China and Japan are Building Them

EPA Rules Bring Pink Slips to a Town Near You