The North American Electric Reliability Corporation (NERC), a Federal advisory agency established to ensure reliability of the bulk power system, recently released a study of pending regulations affecting the electric power industry.[i] The study indicates that 4 proposed Environmental Protection Agency (EPA) regulations would decrease existing electric generating capacity by between 33 and 77 gigawatts by 2015[ii], or between 3 percent and 7 percent, if implemented as currently planned. The impacted capacity would be mainly coal-fired, but oil and gas steam capacity and nuclear capacity would also be affected. NERC warns that retiring or upgrading so much capacity in such a short period of time to meet the new regulations could result in brownouts or electric power shortages. Unfortunately, these proposed regulations are a way for the Obama Administration to impose restrictions on the industry without needing Congressional approval[iii], which will result in higher electricity prices for the consumer.

NERC examined 2 cases, a Moderate and a Strict Case, for three different years, 2013, 2015, and 2018. The Strict Case assumes higher costs for compliance and more stringent requirements for the proposed rules than the Moderate Case. A plant can either comply with the regulation by adding the appropriate technology or retire if the costs of compliance exceed the costs of constructing a new plant. The study assumed that the cost of replacement power would be based on new natural gas-fired capacity and the cost of upgrading a plant would be based on the current average retrofit costs using existing technology.

The Strict Case, assuming 25 percent higher costs, was developed to examine the possibility of the industry not being able to meet the stringent compliance deadlines, and the EPA not granting sufficient waivers, which are granted in the Moderate Case. Because of the multiple regulations being phased in together, it may be difficult to schedule and retrofit the plants by the deadlines proposed by EPA.

NERC found that the four proposals could have significant economic impacts on generating plants, which would affect the reliability of the bulk power system. Both retirements and derating of capacity for units adding environmental equipment would occur. Between 40 and 69 gigawatts of existing capacity would be prematurely retired by 2018, and between 6.5 and 7.4 gigawatts of capacity would be derated due to the operation of the additional environmental equipment needed for compliance. NERC found that Section 316(b) of the Clean Water Act would have the greatest impact followed by MACT. 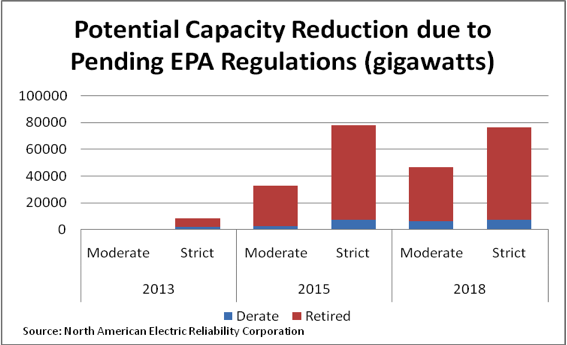 Because of the early retirement of so many units, the bulk power system would be stressed unless new units were constructed. However, additional new construction could be in jeopardy because of the tight schedule for completing the technology additions on existing units for environmental compliance and because of new construction already in the pipeline needing permits, financing, and construction supplies. Certain areas of the country would be more vulnerable than others. As a result, brownouts and electric supply shortages could result, according to NERC.

Carbon-limiting legislation is not necessarily needed for demise of coal-fired generating plants. All that would be required are strict EPA regulations that would require the reduction of existing coal-fired capacity, causing electric customers to pay for either the additional retrofit costs for compliance or for new generating units to be built to replace prematurely retired capacity. And in the interim, some consumers could experience brownouts or even electrical shortages because of the possible lack of proper scheduling for the new environmental rules. Of course, this report is a warning to caution EPA on how they should schedule the implementation of these pending regulations. Let’s hope they comply with the warning.

Can You Hear Me Now?