Earlier this week, Exxon Mobil released its energy outlook, forecasting that global energy demand will grow by 25 percent by 2040 and that oil and natural gas will capture a combined 60 percent of the 2040 market, with natural gas primarily substituting for coal’s projected decline.[i] Demand would have doubled by 2040 if it were not for the efficiency improvements that Exxon Mobil expects by 2040 as depicted in the graph below. Energy demand growth will mainly occur in developing nations with China and India garnering over half of the expected 25-percent growth. Despite energy demand continuing to grow due to an increase of 25 percent in global population, Exxon Mobil expects carbon dioxide emissions to peak around 2030 and for its intensity (carbon dioxide emissions per unit of the world’s GDP) to be halved by 2040. 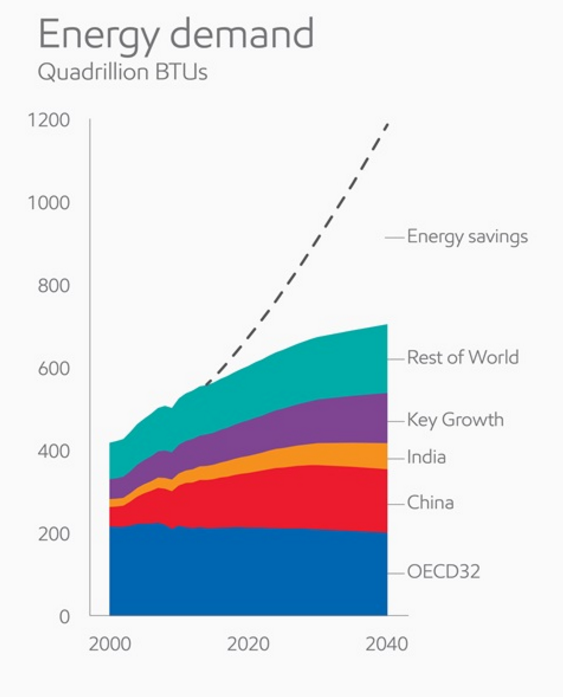 OECD 32 countries are the Organization for Economic Cooperation and Development nations including the United States, but excluding Mexico and Turkey, which are covered in the Key Growth countries. Energy demand in the OECD32 is expected to decline by 5 percent between 2014 and 2040.

Exxon’s annual energy outlook is one of several global outlooks, including one by the Energy Information Administration, which represents the world “gold standard” for energy projections, due to the quality and extent of data used to compile it.

Exxon Mobil lowered its forecast for China’s annual energy demand growth by almost a tenth to 2.2 percent through 2025. Exxon then predicted that China’s energy demand would plateau around 2030, resulting in an annual energy demand growth between 2025 and 2040 of only 0.2 percent. Despite China accounting for almost half of the global growth in energy demand between 2000 and 2014, Exxon predicts that almost half of the increase in the world’s energy demand through 2040 will come from China and India together. In 2012, China’s GDP increased at about double the rate of energy-consumption growth. According to data from China and the World Bank, in 2015, China’s GDP grew over six times faster than energy-demand growth–China’s energy consumption increased by 0.9 percent in 2015, despite gross domestic product increasing 6.9 percent–the weakest annual rate in 25 years.[ii] 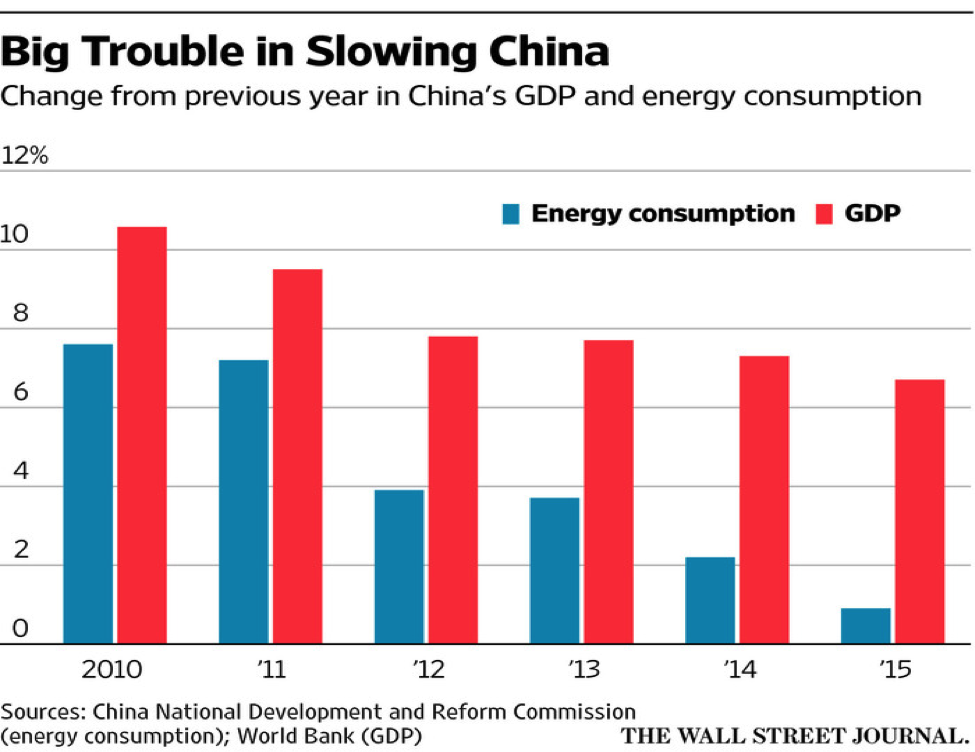 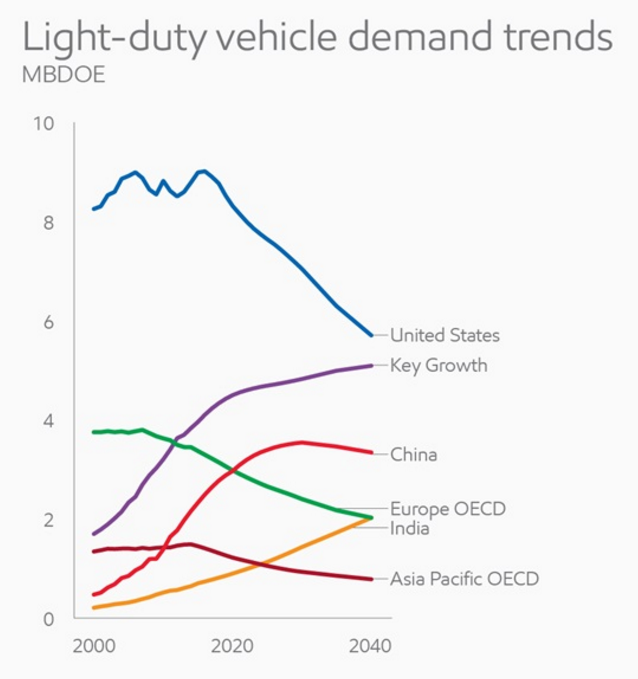 Exxon Mobil expects the average fuel economy of the light duty fleet to increase from 25 miles per gallon today to 45 miles per gallon in 2040, but it varies widely by region. The increase in average fuel economy makes average fuel consumption decrease by half to about 5 liters per 100 kilometers. (See graph below.) Exxon expects one of every four cars on the world’s roads to be a hybrid by 2040 with conventional vehicles (primarily powered by gasoline) continuing to be the most popular. 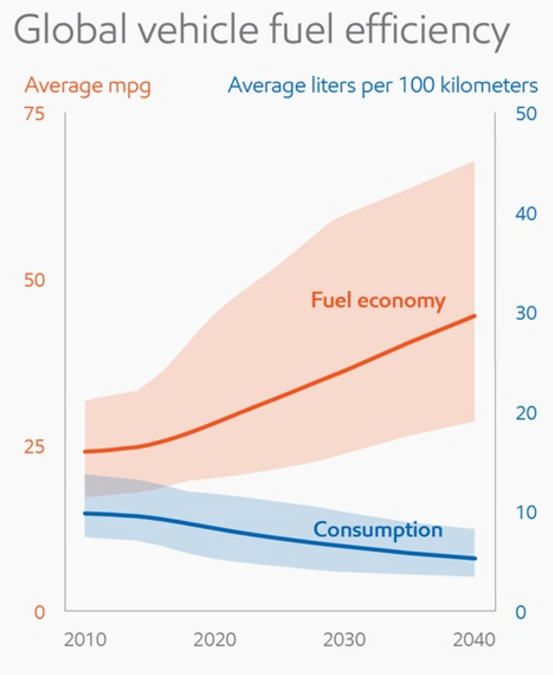 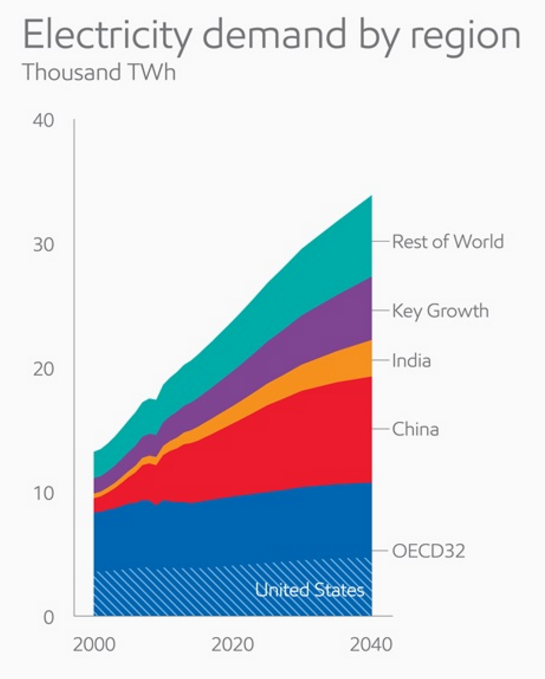 Despite the decrease in coal’s share globally, India more than doubles its coal-fired electricity use between 2014 and 2040. Exxon expects China to use mostly natural gas, nuclear power, and renewables to meet its growth in electricity demand. The OECD countries lead the shift away from coal, turning to natural gas, wind, and solar. 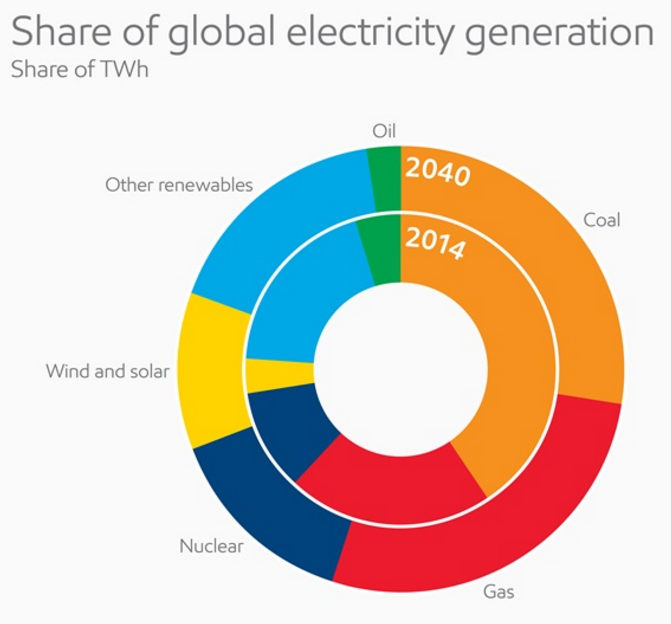 As a result, nuclear capacity is expected to increase by 85 percent between 2014 and 2040, led by China. Wind and solar combined are expected to have 3 times the capacity of nuclear in 2040, but provide less electricity because of their intermittency. Globally, less than 30 percent of wind capacity is able to be used, and for solar, it is less than 20 percent since the wind and solar resources are not always available. 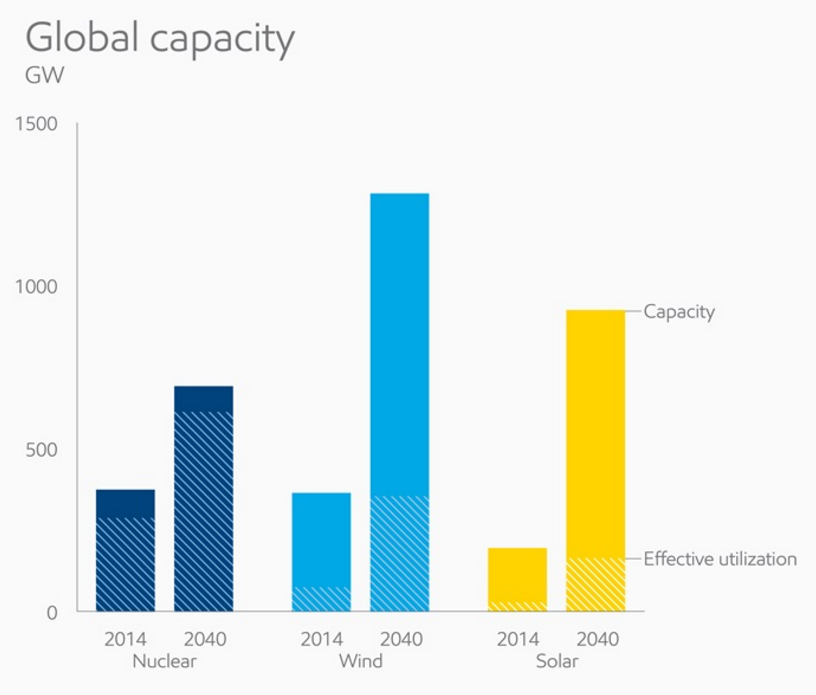 Exxon projects that oil will remain the world’s major fuel through 2040, increasing 25 percent between 2014 and 2040 and remaining essential to transportation demand and chemicals production. Natural gas is expected to increase the most (56 percent), over taking coal as the second most demanded fuel, as many countries seek to reduce carbon dioxide emissions, substituting natural gas for coal in the generation sector. Coal’s share of world energy is expected to decline from 26 percent to 20 percent in Exxon’s forecast. Nuclear and renewables increase through 2040, with nuclear and biomass each having an 8 percent share in 2040, hydro with a 3 percent share and other renewables with a 4 percent share.[iii] 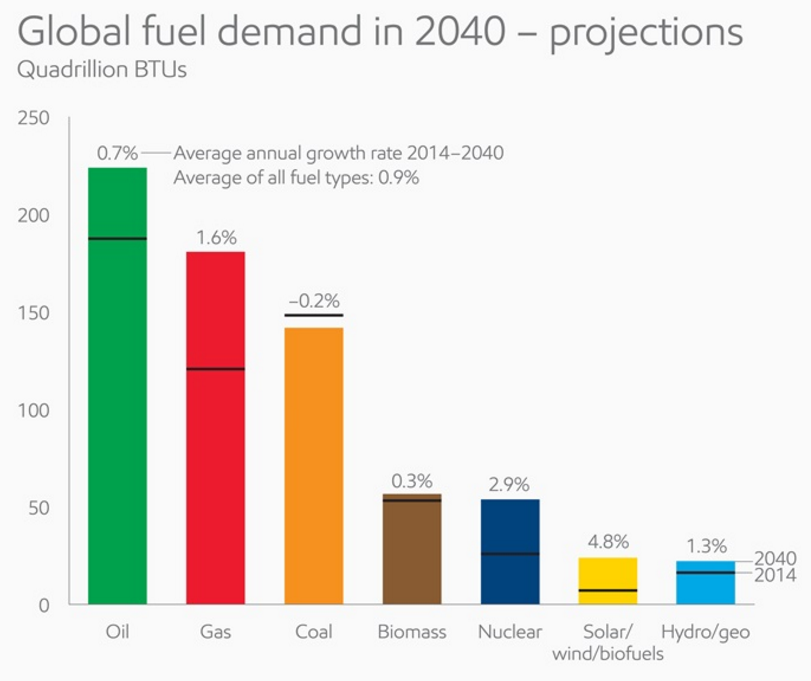 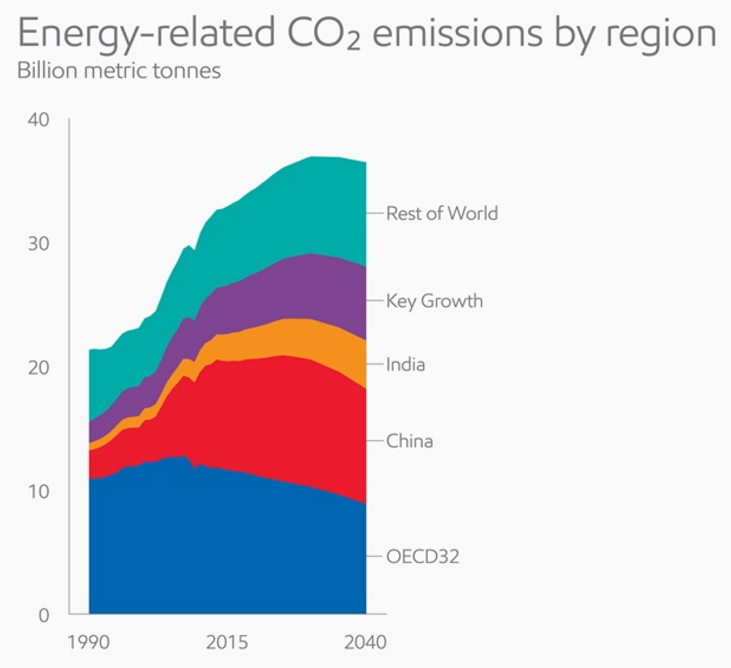 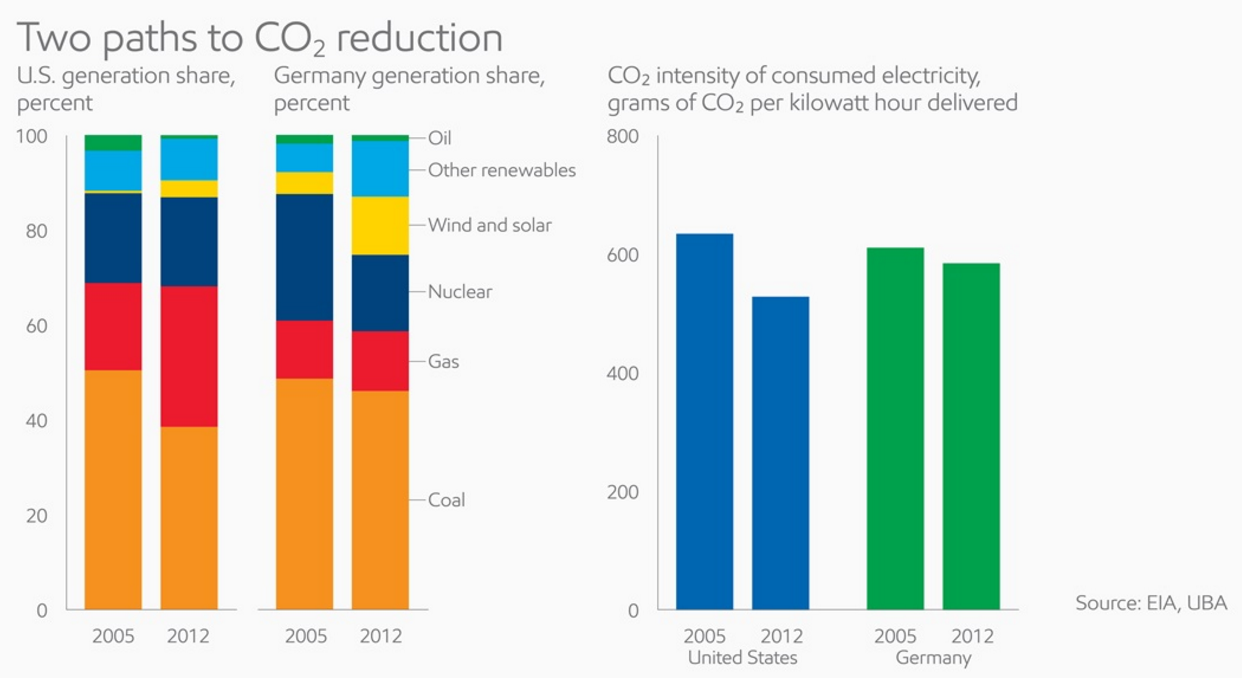 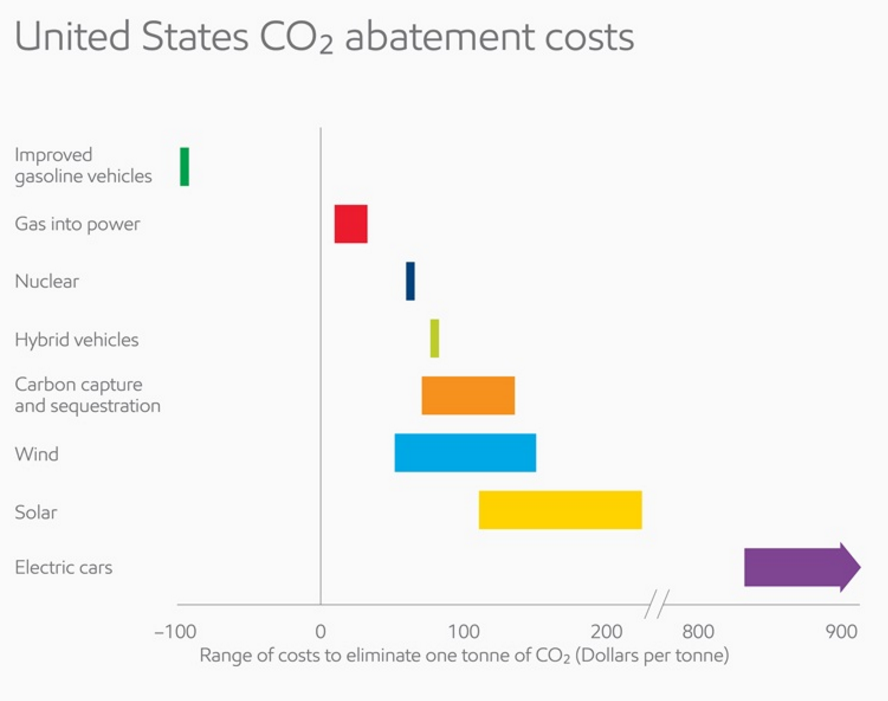 Exxon Mobil projects that oil and natural gas will remain the dominant fuels for the future despite gains in nuclear power, wind, and solar power. This results from oil’s dominance in the transportation fuel market and chemicals production and natural gas’ abundance and competition with coal in the generation market. The company expects energy efficiency improvements to keep energy demand to a growth of just 25 percent between 2014 and 2040 and carbon emissions to peak around 2030. Coal’s dominance as the second most consumed fuel is replaced by natural gas, but many developing countries still turn to coal for electricity generation for its price, ease of use and abundance.

[i] Exxon Mobil, The Outlook for Energy: A View to 2040, January 2016, http://corporate.exxonmobil.com/en/energy/energy-outlook/introduction/a-view-to-2040

The Blizzard of Regulations Continues

Obama Proposes a New Tax on Every American Driver