The federal government owns a great deal of valuable assets both above and below ground. The above ground assets include buildings, lands, roads, railroad infrastructure, levees, dams, and hydroelectric generating facilities, to name just a few, many of which are underutilized. Below the ground, the federal government owns the rights to mineral and energy leases, from which they receive royalties, rents, and bonus payments. 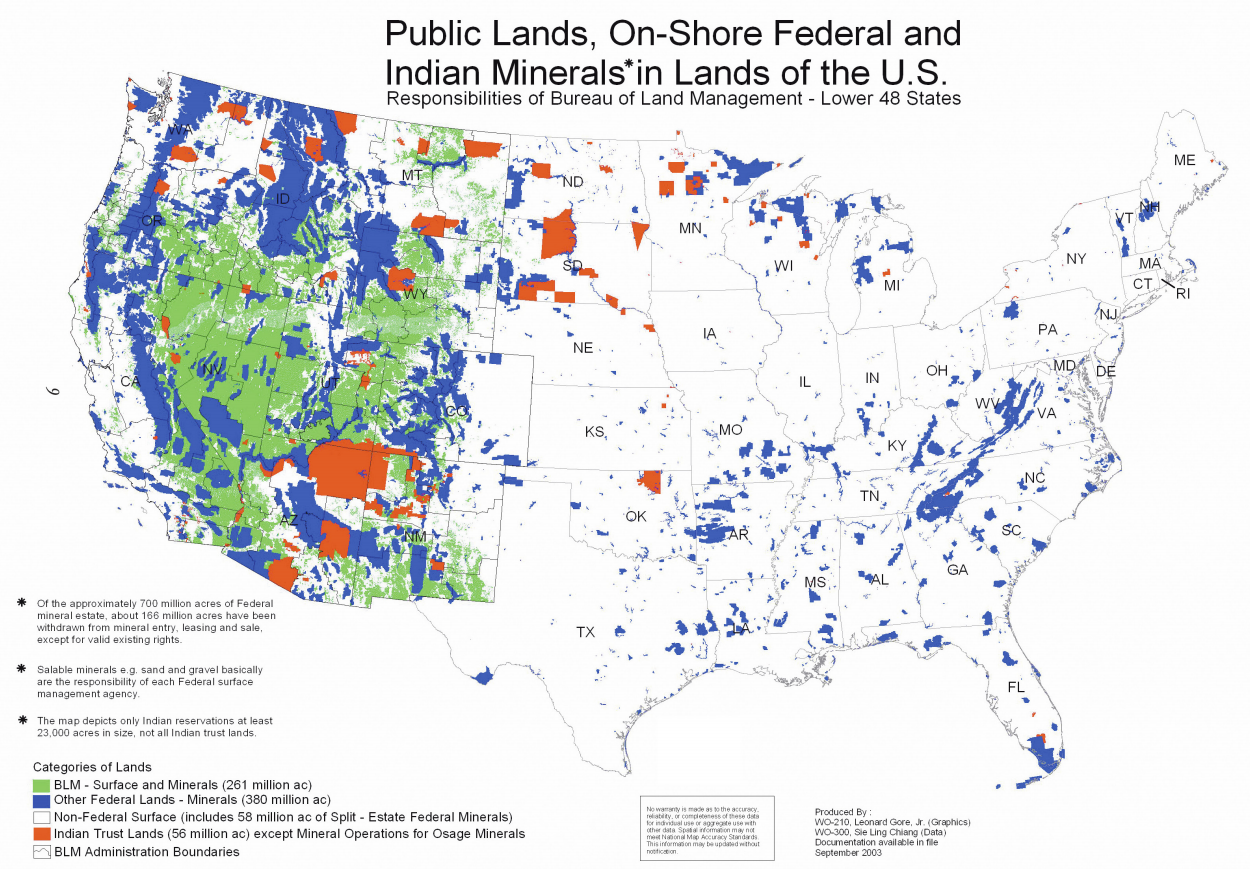 In fiscal year 2009, federal agencies reported 45,190 underutilized buildings, an increase of 1,830 underutilized buildings from the previous fiscal year. In fiscal year 2009, these underutilized buildings accounted for $1.66 billion in annual operating costs, according to the General Accounting Office (GAO). The majority of federally owned and leased space is held by the Departments of Defense and Veterans Affairs, the U.S. Postal Service, and the General Services Administration (GSA).[i] For example, the federal government’s landlord, the GSA, owns or leases 9,600 assets with more than 362 million square feet of workspace. According to the GSA, in a 2009 report, almost 40 percent of its assets were under performing. In October 2010, a congressional study evaluated the savings that could occur based on better administration of the government’s above ground assets that totaled over several hundred billion dollars.[ii]

IER estimated the worth of the government’s oil and gas technically recoverable resources to the economy to be $128 trillion, about 8 times our national debt. Further, the Congressional Budget Office (CBO) estimated that state and national coffers would generate almost $150 billion over a 10 year period from royalties, rents, and bonuses under the current leasing program and another $7 billion if certain additional resources that are either statutorily or administratively withheld were immediately opened to oil and gas leasing. The CBO study estimates are considered to be conservative when compared to historical data and estimates by other analysts and do not consider the earnings from taxes paid by these industries. IER estimated the government’s coal resources in the lower 48 states to be worth $22.5 trillion for a total worth to the economy of fossil fuels on federal lands of $150.5 trillion, over 9 times our national debt. Most of the coal resources in Alaska are deemed to be federally owned and are estimated to be 60 percent higher than those in the entire lower 48 states but are not included in these estimates.

The Federal Government’s Assets above the Ground

The average age of GSA’s real property inventory is 46 years and a third of its assets are older than the agency itself. In 2003, GSA indicated that it had 236 vacant or underused properties consisting of commercial office space, warehouses, manufacturing facilities, and special use facilities such as court houses and a shopping mall, and these still remain vacant or underutilized. According to the General Accounting Office (GAO), DOE, DHS, and NASA report about 10 percent of their facilities as excess or underutilized. If this number is extrapolated government wide, about 330 million square feet of government facilities would be excess or underutilized.

Because of legal and regulatory requirements that agencies must meet when they dispose of government property, they are slow at taking those steps.  Government agencies are required to assess and implement corrective actions needed to meet environmental, repair and maintenance issues before a property can be disposed, as well as screening the property for other federal uses. Agencies rarely recoup the costs of these activities. Although Congress passed legislation in 2004 to bypass some of these requirements, agencies are still not readily disposing of unused assets.

The Department of Transportation owns or leases about 69,500 real property assets—more than 4 million miles of roads, a heavily subsidized Amtrak, and more than $17 billion in passenger rail infrastructure. In each of these, a study found mismanagement of federal dollars to achieve goals that should have provided benefit. For example, Amtrak managed several projects to improve speed and performance but accomplished only half of the speed other countries are adopting in an area where high-speed rail could be profitable.

The federal government also owns about 1,700 miles of levees, 650 dams, 383 major lakes and reservoirs, 12,000 miles of commercial inland channels, and 75 hydroelectric generating facilities. The study found that the Army Corps of Engineers is also underperforming, costing the government and taxpayers money because of delays in its project planning process that needs streamlining.

While progress has been made on many fronts, including significant progress with real property data reliability and managing the condition of facilities, agencies face long-standing problems with overreliance on leasing, excess and underutilized property, and protection of federal facilities.

Federal Government Assets below the Ground

Federal assets below the ground are primarily mineral and energy resources, such as oil, natural gas, and coal.  For example, the United States owns millions of acres and billions of barrels of oil that can be developed on federal lands and waters. Currently, the government leases only 2 percent of federal offshore areas and less than 6 percent of federal onshore lands for oil and natural gas production. Areas that the federal government could open to oil and gas development include:

In August of this year, the Congressional Budget Office (CBO) produced a study that evaluated the potential budgetary effects of immediately opening certain federal lands and waters to oil and gas leasing.[iv] In 2012, the office estimates that bonuses, royalties and rents to the government from current leasing provisions would total $10 billion, 6 times the amount the United States loses in annual operating expenses based on underutilized facilities according to GAO. Over a 10 year period, the CBO estimates that the amount from bonuses, royalties and rents from current leasing provisions would total $148.9 billion. The CBO further estimated that if certain resources currently off limits were immediately opened to oil and gas leasing, another $7 billion would be realized over that 20-year period.

While these are interesting numbers, IER has found them to be very conservative. For starters, we believe that the CBO is understating the potential for bonus bids in ANWR, which they estimate at about $5 billion for the decade of 2013 to 2022, since in FY 2008, total bonus payments were more than $10 billion.

Further, other analysts have projected much larger receipts for federal and state governments from expanded oil and gas leasing. For example, in a February 2009 study, Joseph Mason estimated that in the long-run, expanded OCS development (not including ANWR) would yield an average of $14.3 billion in extra royalty revenue per year. He also estimated an additional $54.7 billion in federal tax revenue annually and $18.7 billion in additional state and local tax revenue that would result from expanded economic activity.[v]

CBO is vastly restricted in its assessment of potential values that might accrue to the U.S. Treasury from oil and gas lease sales because a good portion of its work relies upon U.S. Department of Interior estimates, which are notoriously bad.  For example, DOI estimated that a February, 2008 lease sale in the Chukchi Sea off the northwest coast of Alaska would generate $67 million, but industry actually spent 40 times as much — $2.66 billion – for the right to explore for and produce oil and gas from the region.[vi]  CBO’s numbers should therefore be understood to be limited by the quality of the data it receives from the agencies who report data to it about oil and gas prospectivity of a given lease.  Clearly, those whose jobs depend upon finding and producing oil and gas arrive at different conclusions than those whose information may be much more limited and academic in nature.

According to a multi-agency government study, the federal government owns 957 billion short tons of coal in the lower 48 states, of which about 550 billion short tons are located in the Powder River Basin in Wyoming and Montana. The study did not assess what portion of Alaska’s coal resources are federally owned, though much of them are deemed to be federally owned, due to the lack of specific data. Coal resources in Alaska are larger than those in the lower 48 states, exceeding them by about 60 percent.

Within the Powder River Basin, less than 1 percent of the mineral estate is currently available for mining, containing less than 1 percent of the federal coal (3 billion short tons).[vii] Since the percentage is small, we evaluate the entire 957 billion short tons of federally owned lower 48 coal at an average price of $15 per ton for the subbituminous Powder River Basin coal and $35 per ton for the remainder of the federal lower 48 coal. Thus, the worth of federally owned coal in the lower 48 states to the economy is $22.5 trillion. Added to the oil and natural gas worth to the economy, we get a total fossil fuel worth of $150.5 trillion, excluding Alaskan coal.

The U.S. government owns assets both above and below the ground that could be better managed through sale or lease. The above the ground assets include underutilized buildings as well as roads, levees, rail infrastructure, and hydroelectric generating facilities to name a few. GAO estimated the cost to the taxpayer of annual expenses to underutilized buildings at $1.66 billion annually. These facilities could be sold but for onerous rules that the government has for environmental and structural issues regarding the properties.

In contrast, the government owns an enormously large mineral estate (oil, natural gas, and coal resources) that has an estimated total worth to the economy of over $150 trillion, over 9 times the national debt. These resources could be leased under the right government policies to earn the state and national government royalties, rents, and bonus payments that CBO conservatively estimates could total almost $150 billion over 10 years for the oil and gas leases alone. That figure excludes tax payments that would be provided to state and national governments from the direct and indirect effects of unleashing tens of trillions of dollars of economic activity here in the United States and the extended benefits of more supplies on reducing the costs of energy for consumers and businesses.  It is well known that abundant, reliable and affordable energy supplies act as fertilizer for economic growth that in turn generates new revenue sources.

It is time to better utilize government assets owned by the U.S. taxpayer, and in turn, unleash the U.S. economy’s potential.

[ii] U.S. House of Representatives, Committee on Transportation and Infrastructure, Sitting on Our Assets: The Federal Government’s Misuse of Taxpayer-Owned Assets, October 2010, http://republicans.transportation.house.gov/Media/file/111th/Sitting_On_Our_Assets_Report.pdf

[vii] Departments of Energy, Interior, and Agriculture, Inventory of Assessed Federal Coal Resources and Restrictions to their Development, August 2007, http://www.fossil.energy.gov/epact/epact437_final_rpt.pdf

Oil Industry Investing In Rail Depots: An Alternative to Keystone