A group of oil and natural gas pipeline operators are planning to spend about $1 billion on rail depot projects to move crude oil from land-locked inland fields to refineries on the U.S. coasts. For the first time, oil and gas companies that have traditionally rented rail capacity are buying those assets to move oil from oil sands fields in Alberta, the shale oil fields in the Bakken region of North Dakota, and the Eagle Ford in Texas. Moving oil by rail costs about 3 times as much as moving it by pipeline, but moving oil by rail is profitable because oil from these areas is priced about 20 percent less than imported crude because of the lack of pipeline takeaway capacity. [i]

The price differential between Alberta’s oil sands and imported crude is even greater than the price difference between U.S. shale oil and imported crude. For Instance, prices for Western Canada Select heavy blend have dropped recently to around $50 a barrel, less than half the price of a barrel of imported crude oil.[ii] As a result, Canadian railroads moved 35 percent more petroleum and refined products in November 2012 than November 2011. Increased production in the oil sands and a lack of pipeline capacity to move the crude to market has created bottlenecks that pushed the price of oil from these regions down compared to imported crude. The Keystone pipeline, if approved by the U.S. state department when first requested, would be moving oil sands to U.S. Gulf coast refineries this year. 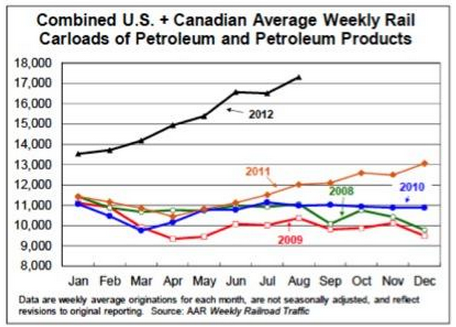 About 1 million barrels a day of rail-unloading capacity is being built in the United States, more than double the current level of shipments, which averaged about 456,000 barrels a day in the third quarter. Burlington Northern, which handles about 35 percent of U.S. oil shipments, is planning capital improvements to haul 40 percent more crude in 2013.

Advantages and Disadvantages of Rail

While rail transport is more expensive than transport by pipeline, rail traffic is more flexible, reaching into metropolitan areas where new pipes are hard to deploy and where refineries are paying the highest price for oil. As rail-oil infrastructure expands, it should become less expensive. Also, although pipelines are cheaper and more efficient, it is faster to build the tracks, unloading terminals and storage tanks to expand rail capacity than to lay new pipe. Currently, crude oil is carried by 120-car trains that span 1.2 miles, with each car carrying up to 762 barrels of oil. Thus, each shipment can be worth $8 to $10 million.

In terms of disadvantages, besides higher costs, the rail industry is faced with a shortage of rail cars that can take two years to be built and delivered. The increased movement of oil by tank car means that companies such as Warren Buffett’s Union Tank Car Co. are reaping the benefits of expanded demand for rail tankers.[iv] Further, the Manhattan Institute indicates that oil spills are a greater risk with trains than pipelines. A U.S. railway is about 34 times more likely to spill hazardous materials than a pipeline transporting the same volume an identical distance. This is not to say that rail is dangerous. It is not. The American Association of Railroads touts a 99.997 percent hazmat safety record.[v] According to the American Association of Railroads, railroads have an accident rate two to three times higher than pipelines, but involve smaller amounts in each incident, since trains carry smaller amounts than pipelines.

The bottleneck of moving Canadian oil sands and U.S. shale oil to Gulf Coast refineries was to be aided by the Keystone XL pipeline that was first proposed in 2008 at a cost of $7 billion, but has met with opposition from the Obama Administration and environmentalists that complain about environmental damage from pipeline spills and higher carbon dioxide emissions from the production of oil sands than conventional crude. As a result, the pipeline route and environmental impact have been reviewed and re-reviewed by the State Department, who must determine if it is in the ‘national interest’ and provide a permit since the pipeline which cross a U.S. border. The Obama Administration is supposed to make a determination early this year on a revised route that avoids a sensitive area in Nebraska.

By not approving or delaying approval of the Keystone pipeline, the Obama Administration is denying Americans an estimated 20,000 jobs and $20 billion to the U.S. economy. However, if the Keystone pipeline is not built, another half-million barrels a day in new rail capacity may be built to deal with the bottleneck. As more rail capacity is built to move oil around North America, railroads should become more efficient. But moving oil by rail causes more carbon dioxide emissions than moving it by pipeline, something which opponents of Keystone XL have failed to address.

Keystone critics must face the reality that if the United States does not import Canadian oil sands, the oil will be moved by pipeline and rail to the west coast of Canada and then transported by ship to be consumed in Asia. This means higher carbon dioxide emissions in transport over the Pacific ocean. And though current oil sands production techniques result in 15 percent more carbon dioxide emissions than conventional oil from well to wheel, new techniques are emerging that could result in a significant decrease in carbon dioxide emissions from oil sands extraction.  Moreover, regardless whether the Keystone XL pipeline is built or not, Alberta’s oil will be consumed somewhere in the world; it will not remain in the ground.  And, if the railroads are correct about adding rail capacity, oil sands will still be refined and used here in the United States.

What drives transportation of energy is its demand. As long as the United States and the world demands petroleum – and there is every reason to believe that will be the case for most of the 21st century — some method of transportation will be used to get the crude oil to refineries and refined products to consumers. The most economical means for transporting crude oil seems immaterial to the Obama Administration, which is not paying the increased cost of rail transport instead of pipeline transport.

Regardless of the Administration’s stance, however, U.S. ingenuity will work out the impediments as it is doing by shipping crude oil by rail, even though it is less efficient and more expensive than pipeline transport. Favorable price differentials between landlocked crude production in U.S. shale oil basins and Alberta oil sands and coastal refineries due to transportation bottlenecks are covering higher rail transport costs.  This means more money in the pockets of railroads and less money to invest in new oil production in North America, another example of how government action – or inaction in this case – results in the picking of winners and losers.

[v] Oil On the Tracks: How Rail Is Quietly Picking Up the Pipelines’ Slack, October 8, 2012, http://www.desmogblog.com/2012/10/02/oil-tracks-how-rail-quietly-picking-pipeline-s-slack

Federal Assets Above and Below Ground