In 2008, Barack Obama explained his energy policy: “Under my plan of a cap-and-trade system, electricity rates would necessarily skyrocket. Even regardless of what I say about whether coal is good or bad.” He went on to explain, “So, if somebody wants to build a coal plant, they can – it’s just that it will bankrupt them.” Washington Times, June 19, 2012[i]

In 2010, after the failure of his cap and trade program, President Obama said there were other ways “to skin the cat.”

Today, these policies are bankrupting coal companies and leading to more unemployment.

Coal is the world’s fastest growing source of energy, but due to the federal government’s assault on coal, and low domestic natural gas prices, coal consumption is declining in the United States.  This is despite the U.S. having the largest proven reserves of coal in the world. Unprecedented pressures on the U.S. coal industry have resulted in nearly two years of mine closures and layoffs, hitting Kentucky the hardest. The picture is bleakest across 26 counties in Kentucky’s eastern coalfields, where coal has been the lifeblood for more than a century. In Eastern Kentucky, coal mine employment has declined by about 30 percent from its 2000-2010 average and coal production has declined by about two-thirds since 2000. 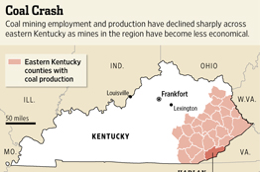 Lower domestic coal consumption has made competition among coal mines strong. It costs electric utilities 40 percent more to use coal from Eastern Kentucky coal fields than coal from Wyoming, for example. While Wyoming coal costs more to transport and does not generate as much electricity per ton, the costs to mine it are less because of its thick coal seams that are surface-mined. In Central Appalachia, the region’s coal seams are thinner, costing $60 to $70 a ton to extract, and less direct rail routes out of eastern Kentucky make its coal more expensive to transport.

In Kentucky’s Harlan County, the number of mining jobs declined 48 percent between 2011 and June 2013; the county’s unemployment rate had risen to 16.3 percent as of August, the 13th highest of more than 3,000 counties in the nation. As of June 2013, mining jobs were down 54 percent in Letcher County from 2011, with laid-off miners making up nearly half of unemployed workers. In Knott County, mining jobs are down 68 percent from 2011, and the number of laid-off miners is about equal to the county’s unemployed population.

Alpha Natural Resources, the nation’s third-largest coal producer, laid off 594 workers at Kentucky mines and related coal facilities since January 2012. It now operates 10 underground coal mines in Kentucky, down from 23 underground and six surface mines in 2011, and it shuttered four facilities that process coal.

Some Kentucky miners have opted to take lower paying jobs. One Kentucky miner laid off in June 2012, for example, trained to be an emergency medical technician, paying $12 an hour, less than half of his prior salary as a miner of $26 an hour. Laid-off miners and local businesses struggle, with shop sales down about 30 percent this year, and unemployment insurance benefits expected to run out for more people over the next several months.

A struggling coal industry is not unique to Kentucky; production totals have leveled off across much of Appalachia and in other areas as well. The table below provides the states with one-year losses to coal production in 2011 by mine type. Both underground and surface mines have been affected.

Not only are existing mines in trouble, but so is the potential for opening new coal mines. For example, energy resources on Indian lands are largely untapped. Indian reservations contain almost 30 percent of the nation’s coal reserves west of the Mississippi with a value of almost $1.5 trillion, according to the Council of Energy Resource Tribes. The Crow Indian reservation in Montana has one of the nation’s largest coal reserves with about half of the tribe’s annual $27 million general fund coming from coal. But, because of federal regulations that are reducing coal consumption and the slow federal permit approval process, the tribe cannot obtain the full potential from its coal resources, which would help the tribe’s income and unemployment. Indian incomes are about a third of those for all U.S. citizens, and unemployment rates are four times the national average, with the Crow unemployment rate at 50 percent.[iii]

Coal generated more than 50 percent of our electricity just a decade ago. In 2003, coal’s generation share was at 51 percent. But for the first 8 months of this year (through August), coal accounted for 39 percent of U.S. electricity generation. In comparison, natural gas has increased its generation share from 17 percent in 2003 to 27 percent through August of this year. New emissions standards have resulted in the closing of coal-fired power plants and low natural gas prices have resulted in gas’ climbing share. The Energy Information Administration expects about 9 percent of coal-fired capacity to prematurely close between 2013 and 2018.

Coal has been on the receiving end of some of the toughest regulations from the Obama Administration. Shortly after taking office in 2009, President Obama’s Environmental Protection Agency (EPA) imposed tougher standards on surface coal mining. Then, EPA promulgated regulations that ostensibly target mercury from coal-fired power plants (the Mercury and Air Toxic Standards). The mercury reduction benefits of the rule, even though overblown, are minuscule compared to the costs, begging the question of whether the purpose of the rule is to reduce coal production.[iv]

Many call this rule the Utility MACT rule because the rule requires “Maximum Achievable Control Technology” for mercury at coal-fired power plants. These technologies must be installed over a tight 3-year period between 2012 and 2015, raising the cost of generating power from existing coal-fired plants where the economics make sense to install the technology, or forcing those plants to retire or to convert to natural gas.

Upcoming EPA greenhouse-gas regulations for power plants also threaten the industry. EPA ramped up its attack on coal by issuing stringent limits on carbon-dioxide emissions from new coal-fired generating plants; the rules are considered tough enough to prevent any new coal plants from being built in the United States. The rule creates a 1,100-pound limit per megawatt hour on carbon, although the most advanced coal plants put out 1,800 pounds or more.

While EPA believes new coal plants could install carbon capture and sequestration technologies (CCS) to get below its carbon ceiling, in reality the CCS technology is still unproven and would require billions of dollars of capital investment in a hostile regulatory environment. The new rules would in effect stop the construction of new coal-fired power plants because EPA’s emission-reduction goals are not realistic using current technology for carbon capture and sequestration.

Besides cost, other problems with CCS technology are: 1.) it reduces the output of power plants significantly; 2.) no pipelines exist to transport the carbon dioxide to a location where it could be sequestered; and 3.) the opposition to those pipelines and sequestration projects will be huge.[v]

President Obama’s ‘war on coal’ is hitting some areas of the country harder than others, with Kentucky being the hardest hit coal-producing state. But, his administration’s ‘war on coal’ is just starting with more regulations being proposed. EPA’s greenhouse gas emission regulations makes building new coal-fired plants impossible for there is no commercially available technology to comply with the regulations. EPA also intends to regulate carbon emissions from existing power plants, and has held public listening sessions to kick off the process to determine the rule. If these regulations are finalized, many, many more coal-fired power plants will be prematurely retired, and many more coal miners will be without jobs.

More Destructive Than You Think: Clarifying the “Tax Interaction Effect”