Every year, the Obama Administration piles more and more regulations on states and American businesses. The 2016 update of the Mercatus Center’s Federal Regulation and State Enterprise (FRASE) index shows the incredible proliferation of federal regulation on the lives of ordinary Americans. Nevertheless, Americans continue to drive an energy revolution with substantial domestic benefits. Energy is the lifeblood of the economy, and government policies should be crafted to allow domestic production to flourish—not restrict it for political reasons.

According to the FRASE index, “regulatory agencies pass thousands of administrative laws” every year that either “mandate or prohibit some activity”—including various economic activities. Scholars at the Mercatus Center, a research center at George Mason University, assessed which sectors of the economy these regulations affect the most, and ranked which states are hardest hit.

Based on the index, the most-regulated industry for 2014 was “petroleum and coal products manufacturing”—companies that produce goods like plastics, gasoline, and coal. In total, the scholars counted more than 25 thousand industry-relevant restrictions on oil and coal products.[1] Other energy-related industries that made the list included the electric power sector and oil and natural gas extraction. In essence, the most productive and essential facets of U.S. energy production are extremely over-regulated.

Over the last two decades, the U.S. Environmental Protection Agency (EPA) has been promulgating more and more rules. Specifically, the Obama Administration has released a number of economically disastrous regulations, including a costly regulation on carbon dioxide emissions from existing power plants, a legally-tenuous mercury rule, and an unnecessary ozone rule. According to the FRASE index, environmental regulation “represents the most significant contributor to the increase in regulation overall since 1997.”[2] This trend is depicted by the graph from the Mercatus report below: 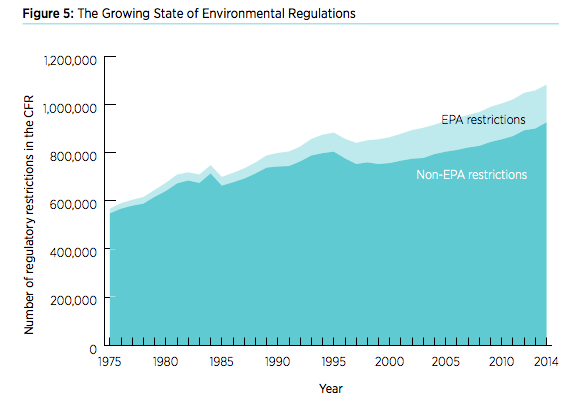 Rather than allowing American energy producers to create economic growth—with families, businesses, and motorists reaping the benefits—the administration continues to hamper economic opportunity. For example, coal—which generated the largest share of U.S. electricity in 2014—is struggling under the weight of unnecessary environmental regulations.

Furthermore, many of the states that are most affected by federal regulations are also home to important energy-related activities. According to the index, Louisiana, Alaska, and Wyoming have the highest level of regulation. Burdensome restrictions on energy production are a primary reason these states are so highly ranked:

The trend is clear: states that produce affordable, reliable energy are generally the most burdened by federal red tape.

Families and businesses would reap substantial benefits if the government stopped picking winners and losers and followed free market principles. A recent Institute for Energy Research study found that expanding the development of oil, natural gas, and coal on federal lands would produce enormous economic benefits. Over the next seven years, GDP would increase by $127 billion, 552,000 jobs would be created, and annual wages would increase by $32 billion.

Obama Energy Regulations Abound; But More Yet to Come