President Obama has aggressively pursued government regulation of energy through the Mercury and Air Toxic Standards, the so-called Clean Power Plan, the ozone rule, and very strict CAFE standards. Now, his administration is pursuing regulations on methane, heavy trucks, and aircraft emissions. Americans are already subject to trillions of dollars in costs with the regulations already on the table, and they will see many more costs placed on them in the future because of these and other regulations before his term expires.

EPA’s Mercury and Air Toxics Standards rule went into effect in April of 2015. The rule requires about 600 facilities to reduce mercury emissions. The EPA predicted that this rule will have an annual cost of $9.6 billion, in exchange for about $4 million to $6 million in benefits from reduced mercury emissions. But the $9.6 billion in costs looks optimistic. A study by the National Economic Research Associates found the rule to have an economic cost to consumers of over 2.5 times as much—$25.6 billion per year.[i] This regulation alone caused an estimated 30 percent of coal plant retirements in 2015.[ii]

EPA’s so-called Clean Power Plan requires a 32 percent reduction of carbon dioxide emissions from the electric generating sector below 2005 levels by 2030. A NERA analysis projects that the plan would cost consumers as much as $39 billion a year and that an additional 47,000 megawatts of coal-fired capacity would be retired, posing a major threat to electric reliability. Despite these impacts, EPA’s CPP would have virtually no effect on climate change, reducing atmospheric carbon dioxide concentration by less than one-half of a percent and lowering global average temperature by two hundredths of a degree.[iii]

EPA Administrator Gina McCarthy admitted that the CPP was meant to show “leadership” rather than actually curb projected warming.[iv] In a hearing, Rep. McKinley asked, “I don’t understand. If it doesn’t have an impact on climate change around the world, why are we subjecting our hard working taxpayers and men and women in the coal fields to do something that has no benefit?” According to Ms. McCarthy, “We see it as having had enormous benefit in showing sort of domestic leadership as well as garnering support around the country for the agreement we reached in Paris.”[v] In other words, the Administrator of the EPA knows the costs are high and the climate change benefits of the president’s regulations are almost non-existent, but views them as useful for their public relations campaign.

Despite the leadership claims that EPA cites for the United States and China’s promises to curb coal use, China issued permits to build 155 coal-fired plants (123 gigawatts) in the first 9 months of 2015.[vi] India also plans to double its coal production by 2020.[vii] As a result, the United States most likely will be “going it alone” among the largest greenhouse gas emitters in the world, targeting existing electricity sources while others increase their consumption of energy and emissions of carbon dioxide.

The Environmental Protection Agency (EPA) now requires ozone levels at 70 parts per billion by 2025, down from 75 parts per billion that was adopted in 2008.[viii] Despite many areas still being out of compliance with the previous standard, the EPA will require metropolitan and state governments to comply with the new stricter standards. If the region does not obey, the federal government can withhold highway funding. EPA’s new proposed ozone standard is expected to cost $1.4 billion annually, according to the agency’s own estimates.[ix] Others suggest the actual costs will be much higher, and that the ozone regulation will be the most expensive regulation ever developed by government. This is despite the fact that EPA’s own analysis shows ozone emissions have been reduced by over 30 percent since 1980.[x]

In 2012, the Obama Administration enacted new fuel-efficiency standards (CAFE standards) that doubles car-and-truck fuel efficiency by 2025, with sales of light duty vehicles reaching an average 54.5 miles per gallon. To achieve this, automakers will have to reduce the weight of vehicles, use more aerodynamic designs and decrease engine size, as well as manufacture more hybrids and electric vehicles. However, even if auto manufacturers reach an average of 54.5 miles per gallon, most cars and trucks will get lower mileage in real-life driving. [xi]

The Obama Administration estimated the new standards would reduce oil consumption by 12 billion barrels over the course of the program and that these rules would cut greenhouse gas emissions in half by 2025, eliminating six billion tons over the course of the program. The Obama Administration, however, does not highlight that these rules will increase the cost of new vehicles, costing thousands of dollars more than what they will save on fuel,[xii] which will shut out almost seven million people from the new car market. 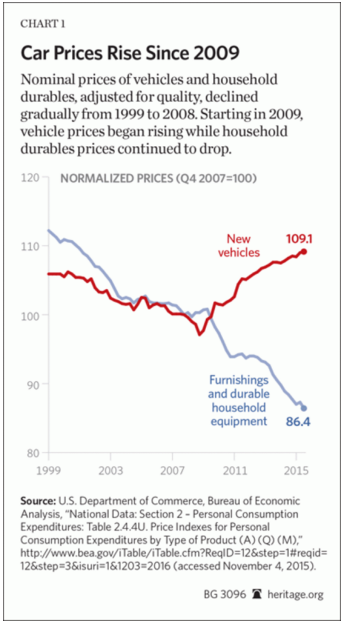 This summer, the EPA and the Department of Transportation are planning to finalize similar standards for heavy-duty vehicles. The new standards will require tractor-trailers, vocational vehicles (like UPS trucks), and super-duty trucks and vans (like the Ford F-250) to almost double their fuel efficiency by the end of next decade. These rules will also be the first to require not just more efficient tractors, but aerodynamically improved trailers. EPA is not just redesigning our electrical grid, they are now determining the style of vehicles allowed on the road.

Because the mileage of heavy duty vehicles does not significantly change in response to varying fuel prices, increasing the efficiency of these heavy duty vehicles should provide a good estimate of how much greenhouse gas emissions can be reduced. Passenger vehicles are different, where the rebound effect causes drivers to increase their miles driven when the price of driving decreases.

EPA first announced that it plans to limit methane emissions by setting rules regarding how much methane can be emitted by all new oil and gas operations in the United States. Then, in March, President Obama announced that his EPA will begin developing regulations to reduce methane emissions from existing oil and gas sources.[xiii] Oil and gas companies will need to find and repair leaks in new equipment, capture natural gas from the completion of hydraulically fractured oil wells, limit emissions from new and modified pneumatic pumps on well pads, and limit emissions from several types of equipment used at natural gas transmission compressor stations.[xiv] Besides the EPA rulings, the Bureau of Land Management will limit how much methane can be “flared” by oil companies when they are producing natural gas from both new and existing wells on federal lands.[xv]

These rules are planned despite the oil and gas sector having reduced methane emissions from natural gas production by 38 percent since 2005 while increasing natural gas production by 26 percent. (See chart below.) According to the EPA, methane emissions from hydraulically fractured natural gas wells are down 79 percent since 2005.[xvi] The industry achieved this by capturing the gas at the wellhead immediately after well completion, using better control devices (low-bleed or no-bleed pneumatic valves), and using advanced monitoring technology systems to identify sources of methane emissions.[xvii] 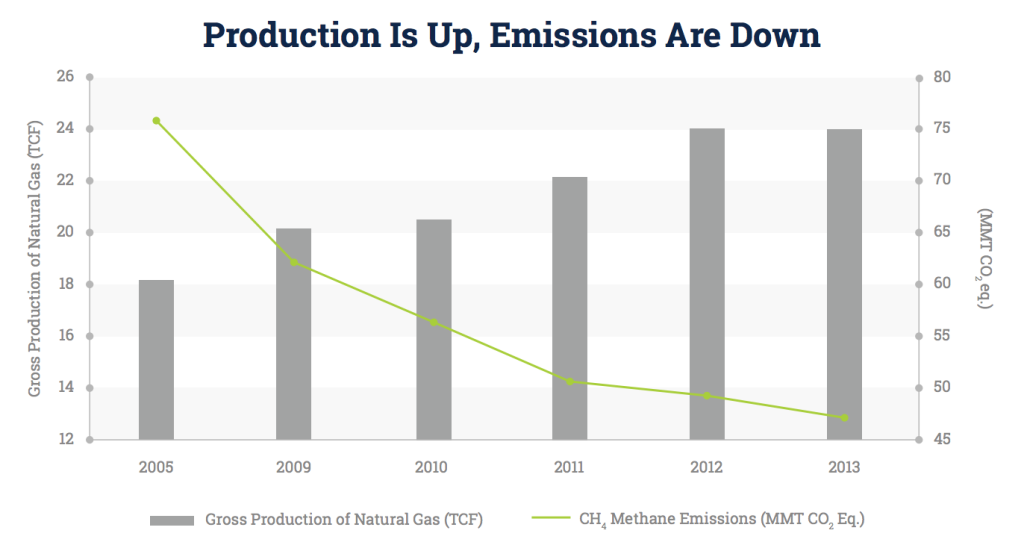 In February, the International Civil Aviation Organization (ICAO), the United Nations agency that oversees passenger flights, determined limits on carbon dioxide emissions on new airplanes delivered after 2028. The new standards require a 4 percent reduction in fuel consumption of new aircraft beginning in 2028 compared with 2015 deliveries. They also set new limits for airplanes in production that are delivered after 2023. Depending on the size of the aircraft, actual reductions would be from zero to 11 percent, with a bigger emphasis on larger commercial airplanes.[xviii]

The proposed standards must be formally adopted by the civil aviation council of 36 member states in June of this year, and then endorsed by the council’s assembly in October. They then need to be enacted by each member state in its national legislation or regulation. Once the ICAO finalizes the rules, the EPA will likely issue engine-efficiency rules which are in line with the ICAO standard, which can be expected by the end of this year.[xix] The upshot of this regulation will be more expensive planes and more expensive ticket prices for American travelers. The increased prices do not matter for people who fly around on government jets, but it will harm American families who just want to visit their grandparents.

EPA’s onslaught of regulations will result in increasing energy prices, car prices, truck prices, plane prices and overall travel costs. These increased prices will produce little or no benefit as other countries will just emit more greenhouse gases than we save. Further, the increase in energy prices essentially functions as a regressive tax. Higher energy costs affect low-income households disproportionately, because these households spend a higher percentage of their budgets on energy costs.[xx] President Obama and his EPA see this as a leadership game, which they want to promote after the Paris summit last December, but everyday Americans will feel it in their pocketbooks.

Carbon Restrictions and the Problem of “Leakage”