“The U.S. needs to maintain its lead on innovation in the energy sector given the rise of China’s growing energy needs and its commitment to clean technology, according to Secretary of Energy Steven Chu. Chu likened the energy race to the “Sputnik” movement….”[i]

China is currently the largest producer and consumer of coal in the world, outstripping the United States by a factor of more than 3[ii]. In fact China’s growth in coal consumption is so great that it needs to import coal to satisfy its demand even though it ranks third in coal reserves in the world[iii].  China became a net importer of coal in 2009, buying almost 151 million tons[iv] from coal exporting countries, including the United States and Australia. That number is expected to increase substantially in the years to come. The Chinese use coal, the primary fuel spurring its economic growth, in most sectors of the economy, but particularly in the electric power and industrial sectors.  China’s economic growth is so phenomenal that it expects to have 350 million people, more than the entire population in the United States,[v] living in cities that do not yet exist within the next 15 years,[vi] which will require additional electrical capacity of an amount almost equal to the total electrical capacity of the United States.[vii]

Environmentalists in the United States, who have actively worked to stop the construction of new coal-fired plants here in order to lower future greenhouse gas emissions, are now faced with a dilemma. Those same greenhouse gases still will be emitted just elsewhere as the developing world is seeking reliable forms of fossil energy to continue to fuel their economic growth. 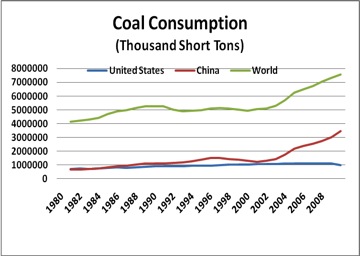 According to data from Daiwa Capital Markets and the U.S. Energy Department, China added about 51 gigawatts of coal-fired capacity in 2009,[x] and most likely added about the same amount in 2010. According to calculations based on official data, in the first quarter of 2010, China used coal to generate 86 percent of its electricity.[xi]

According to the general manager of the State Grid Corp of China, generating capacity is expected to reach 1,440 gigawatts by 2015 and 1,760 gigawatts by 2020, 75 percent more than the current capacity in the United States. According to the National Energy Administration in China, generating capacity at the end of 2010 was 950 gigawatts, so China expects capacity to grow by 52 percent over the next five years. China’s thermal capacity, most of which is coal, is expected to increase by between 260 and 270 gigawatts over the next five years.[xii]

The International Monetary Fund expects China’s gross domestic product to grow by 9.6 percent in 2011, needing reliable sources of energy to fuel that growth.[xiii] China’s Energy Research Institute indicates that China will need an additional 2 billion tons of coal over the next 10 years to fuel the country’s industrial development,[xiv] which means that in the next 10 years, China will increase its coal consumption by almost 60 percent.

According to a Chinese official, the country’s transportation system is the only serious limitation on how fast Chinese power companies can increase their use of coal. China’s main reason in building light-rail systems for passenger traffic is to get that traffic out of the way of coal trains.[xv]

China’s coal production in 2009 was almost 3.4 billion short tons, 44 percent of the world’s total coal production[xvi], and slightly short of its coal demand, requiring it to import coal. While China has 14 percent of global coal reserves[xvii], ranking third in the world, it is having trouble expanding production, mainly due to transportation infrastructure problems.[xviii] Because China’s rail lines are already overburdened by coal transport, it has had to use truck to transport coal from fields in Inner Mongolia to Beijing creating enormous traffic jams as roads need to be repaired from the heavy coal traffic. This past summer, traffic congestion of 100 kilometers (about 60 miles) lasted over a week on a major highway between Inner Mongolia and Beijing.[xix] For this reason, China is contemplating putting limits on coal production of 3.6 to 3.8 billion tons in its next Five Year Plan, which begins this year.[xx] That may, however, only result in greater coal imports. 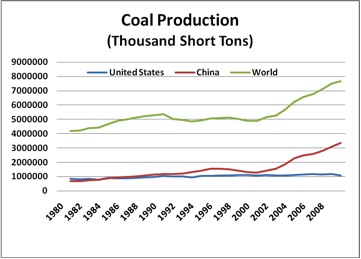 China’s net coal imports, its coal imports minus its coal exports, in 2009 were over 112 million tons[xxi] and increased 27 percent to 143 million tons in 2010.  They are projected to increase 63 percent to 233 million tons this year.[xxii] China imports coal for various reasons, including obtaining better quality coal, the proximity of its coal-burning factories to overseas shipments, and the transportation infrastructure problems noted above.

China’s coal contains high amounts of sulfur and is largely untreated resulting in high levels of pollution. Coal from the Powder River Basin of Montana and Wyoming, for example, is low in sulfur and would allow power plants to burn more without exceeding local pollution limits. Also, much of China’s coal is inland while the coal-burning factories are along its coast where it is often easier to receive shipments from abroad. Obtaining lower-sulfur coal imports would help its pollution problem but only to a very small extent since China’s levels of imports are just a drop in the bucket compared to its own coal production.[xxiii]

The price of export coal has doubled over the past 5 years.[xxiv] Higher prices for export coal have arisen due to a variety of factors, including the increase in coal demand coming primarily from China and India, supply constraints in some coal exporting countries, transportation infrastructure limitations, and weather problems. In the coal exporting countries of Indonesia, Columbia, and Australia, supply disruptions resulted from heavy rain and flooding at mines.  In South Africa, coal export growth has been hampered by a lack of rail capacity.[xxv]

The United States currently exports its coal via Vancouver, Canada, but that route is limited because of large amounts of metallurgical coal exports being shipped out of Canada. Coal exporters in the United States are interested in developing a port in the state of Washington for the export of coal to Asian markets.

Millennium Bulk Ventures is planning to build a coal export terminal in Cowlitz County, Washington, to export Powder River Basin coal, but environmental groups have recently appealed it.  A coalition of five groups filed the appeal, challenging a shoreline development permit issued to the project by Cowlitz County commissioners. The appeal requests that a state environmental impact study be conducted that includes consideration of greenhouse gas emissions produced by the coal shipped overseas and contests a decision to assess planned dredging of the Columbia River. The appeal would push the construction date into late this year, but Millennium Bulk Ventures hope to have it running by 2012.[xxvii] They realize that China will burn coal regardless who exports it, emitting the same amount of greenhouse gases.

China intends to use coal to fuel its power plants and its industrial establishments, regardless of the emissions that result from the combustion of coal because the fuel is both plentiful and reliable. China is already the largest consumer of coal, consuming almost 3.5 billion short tons in 2009, 3.5 times the amount the United States consumes. It is expected to consume an additional 2 billion short tons over the next ten years to fuel new power plants and industrial development- – a 60 percent increase. And, it will most likely need to continue to import coal even though it ranks third in global coal reserves. That means it will continue to increase its greenhouse gas emissions, regardless of the actions of other countries.

You Can’t Make This Stuff Up

Optimism vs. Pessimism on Oil