Apparently, that’s not all they do.

It seems that the folks at Range Fuels are also pretty adept at converting taxpayer funds into their own personal profit.

In November 2007, with much fanfare, Range Fuels broke ground on a cellulosic ethanol facility in southern Georgia 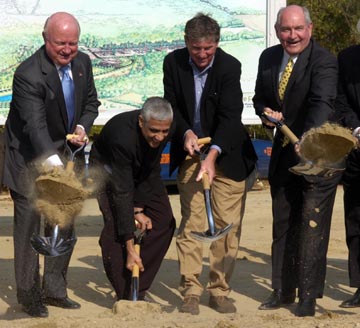 promising to produce one hundred million gallons of ethanol made from wood waste per year by the year 2013.  They also announced they were receiving a $76 million grant from the Department of Energy for their good works.

“Together, the Department of Energy and private sector pioneers, such as Range Fuels, are blending science and technology to advance the President’s goal of reducing our dependence on foreign oil,” said then-President Bush’s Secretary of Energy, Samuel Bodman at the groundbreaking ceremony.

In January 2009, Range Fuels received another $80 million from the federal government, this time in the form of loan guarantees from the Department of Agriculture through something called the Section 9003 Biorefinery Assistance Program.

But last week, according to GPB News (the GPB stands for Georgia Public Broadcasting in case the anti-fossil energy crowd was thinking about blasting the source) reported that Range Fuels is producing one batch of ethanol, shutting the plant down, and laying-off all but four of its employees.

In the same article, Range Fuels technical advisor Bud Klepper states, “This [ethanol] run campaign is to demonstrate that facet of the technology and when we’re done doing that then we’ll shut down.”

Which brings us back to that $76 million DOE grant the company received back in 2007.

It seems that as a condition of the grant, the company only received the first $50 million based upon “the production schedule for the first 20-million-gallons-per-year phase of its Soperton plant” and the other $26 million “will be provided for the construction of the next phase of the project.”

So when Range Fuels technical advisor Bud Klepper (who it turns out is the original founder of the company) also noted in the GPB News article that this first run of ethanol at the Soperton plant was part of an agreement with the federal government, does that also mean they have satisfied the conditions of the grant and will now be entitled to pocket the full $76 million even though they are shutting down the facility?

The clean energy Samaritans at Range Fuels, including former Bush-appointed FERC Chairman Pat Wood III and billionaire venture capitalist Vinod Kholsa, might want to think about revising their “about us” statement to something more suitable like:

“We convert hard-earned taxpayer money that would otherwise be used to pay down the debt (or better still remain in your pocketbooks for you to spend) into just enough ethanol (but mostly methanol) to satisfy the terms of our DOE grant, pocket the dough, shut down the plant, and lay off all of our employees.”

Welcome to the green energy economy, where, like so many other examples, taxpayer money is flushed down the drain while lining some peoples’ pockets.  Let’s hope this time the shutdown is only temporary.

You Can’t Make This Stuff Up.

Washington Logic: It hasn’t worked in the States, Let’s take it National

For China, Coal is Still King