The Energy Information Administration (EIA) just released its report analyzing the Environmental Protection Agency’s (EPA) so-called “Clean Power Plan” and finds that it will shutter many more coal-fired power plants.[i] Coal-fired power plants are already shuttering due to onerous EPA regulations and more will close due to this proposed plan, according to EIA. Today, coal generates 39 percent of the nation’s electricity; by 2030, its share will be reduced to 25 percent if EPA’s proposed plan is implemented. As a result, coal miners will lose their jobs as U.S. coal production takes a major hit over the next decade.

According to EIA, the major compliance strategy in the near term is switching from coal-fired generation to natural gas-fired generation. Renewable technologies (wind and solar) begin to play a major role in the mid-2020s and continue to increase their generation levels through 2040 becoming with efficiency programs the dominant compliance strategy post mid-2020. Electricity prices increase and electric grid reliability is reduced as the electric generating sector is significantly transformed to make the United States a glowing example for climate change talks later this year in Paris. President Obama will force Americans under this onerous policy and the plan will only reduce global temperatures by 0.018 degrees Centigrade by 2100.[ii]

EPA’s plan for existing power plants is to reduce carbon dioxide emissions from the electricity generation sector by 30 percent from 2005 levels by 2030. To do so, EPA provides states with reductions that they must meet and 4 building blocks that they suggest the states can use to get to their assigned targets. These building blocks are:

EIA applied these requirements to the version of the National Energy Modeling System that it used to produce its Annual Energy Outlook 2015 (AEO 2015) and analyzed the impact of the rule against that base case, which incorporates existing laws and regulations already in effect. For instance, EPA’s Mercury and Air Toxic Standards (MATS) is included in AEO 2015 and is a major reason for 40 gigawatts of coal-fired power plants shuttering by 2017 in that forecast.

Coal plant retirements under the proposed rule are projected to increase to 90 gigawatts and almost all retire by 2020—more than double the retirements projected in the AEO 2015 base case. Inefficient oil and gas steam units are also expected to retire due to the proposed rule. That means in a very short time period—just 5 years—the United States loses about 100 gigawatts of generating capacity—a phenomenal number of relatively inexpensive sources of generation and about one-tenth of U.S. total generating capacity. Production costs of existing coal-fired power plants average 3.24 cents per kilowatt hour[iii] compared to a new natural gas combined cycle plant costing 6.44 cents per kilowatt hour[iv], so these retirements will be very expensive to consumers 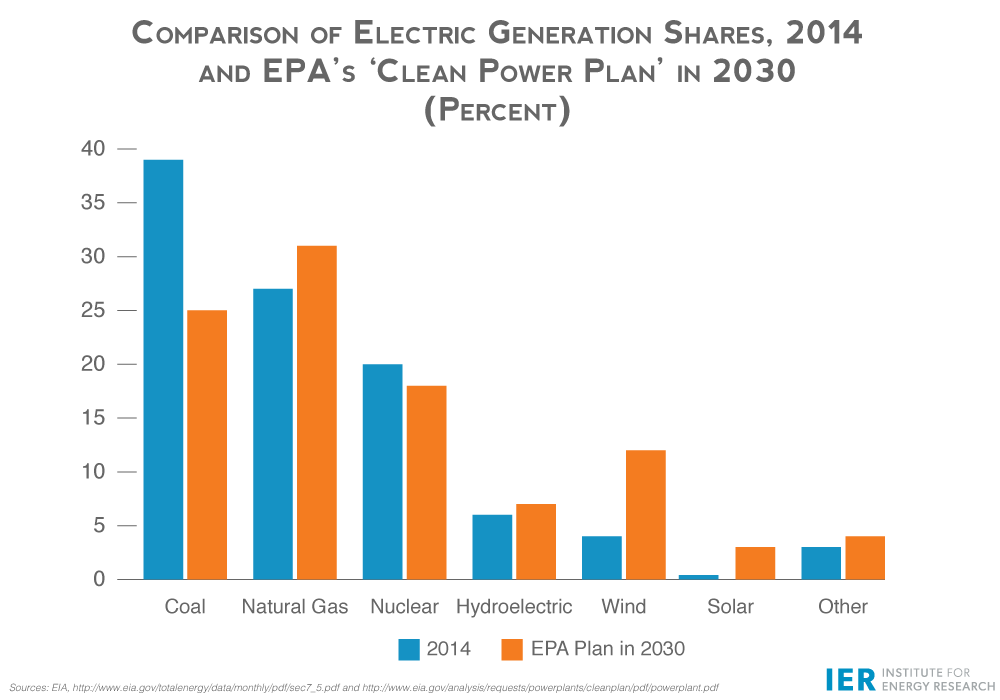 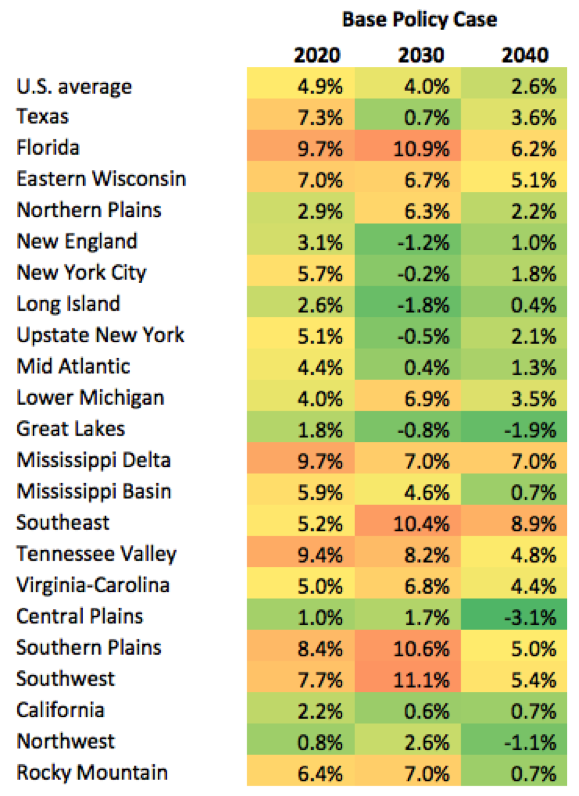 EIA cautions that the model it used for this analysis does not include transfer limits on intraregional power trade, nor does it contain a power-flow model that can assess the reliability of bulk power transmission systems. Thus, the agency did not analyze the upgrades and expansion of the electric power transmission system that would be needed to handle the massive amounts of new renewable generation, most of which is likely to be in remote areas. Also, EIA did not consider how deliverability of natural gas to power plants might be impacted by extreme cold conditions in regions where natural gas is a primary fuel for residential and commercial heating and local natural gas distribution companies typically have the first call on available firm natural gas transmission capacity. Thus, the agency did not analyze whether EPA’s proposed rule would continue to provide Americans with reliable electric power, albeit at higher costs.

The United States already leads the world in reducing carbon dioxide emissions, having reduced half of the amount required by EPA’s proposed rule. That was accomplished because of the natural gas boom resulting from horizontal drilling and hydraulic fracturing technology.

EPA’s proposed plan is a boon to wind and solar generation, but those technologies have accomplished little in countries like Germany and Spain, which have seen skyrocketing electricity prices, the decline of their electric power companies and delivery systems, and huge costs due to the subsidization of renewable technologies. In Germany, for example, residential electricity prices are now about 38 cents per kilowatt-hour, which is roughly three times the average U.S. residential price.

As mentioned earlier, even if the U.S. implements EPA’s proposed plan, the Cato Institute has shown that the plan’s expected cut in carbon dioxide emissions would reduce global temperatures by a negligible 0.018 degrees Celsius by 2100, using the very models EPA uses to judge the impacts of its rules. Yet, as Robert Bryce indicates, “The Clean Power Plan isn’t needed. It won’t stop climate change. It will only further burden American industry — and therefore, American consumers — with unneeded and costly regulation.”[v]

Two things are clear from EPA’s regulatory barrage: They are keeping President Obama’s pledge to make electricity prices skyrocket and to bankrupt the US coal industry. The costs are now accelerating rapidly, and will be showing up in consumer’s utility bills soon.

[i] Energy Information Administration, Analysis of the Impacts of the Clean Power Plan, May 2015, http://www.eia.gov/analysis/requests/powerplants/cleanplan/pdf/powerplant.pdf