The International Monetary Fund (IMF) released its estimate of global fossil fuel subsidies for 2015 at $5.3 trillion—almost ten times higher than the International Energy Agency’s (IEA) calculation of $548 billion for 2013.[i] The difference is not the change of a 2-year span, but the methodology. The IEA uses a “price-gap” methodology, which is the difference between end-use prices and supply costs that include shipping costs, margins, and value-added taxes. In other words, the agency calculates subsidies that the governments pay their own citizens to enable them to buy energy more cheaply than the market price.

The IMF, on the other hand, includes in its methodology externality costs that purportedly measure damages from emissions of carbon dioxide and local pollutants (e.g. sulfur dioxide and particular matter), traffic congestion, and accidents; plus a consumption tax that is assessed on both the supply cost and the externality cost.[ii] These externality costs are not actual costs to the consumer or the government but costs that some analysts believe will pay for their theoretical projections of perceived damage of using fossil fuels. Thus, the IMF subsidies are made artificially higher than what is actually paid for the fossil fuels. The fundamental problem with such an approach is that the average person thinks “subsidy” refers to actual government funds or other advantages given to a particular producer; the fact that firms are allowed to emit greenhouse gases is not what most people have in mind by the term “subsidy.”

Under the IMF methodology, China is alleged to have incurred a $2.3 trillion subsidy for its fossil fuel use as it is the world’s largest energy consumer and the world’s largest coal consumer.[iii] This IMF subsidy estimate that includes externality costs is 110 times higher than the IEA calculated fossil fuel subsidy of $21 billion for China for 2013. 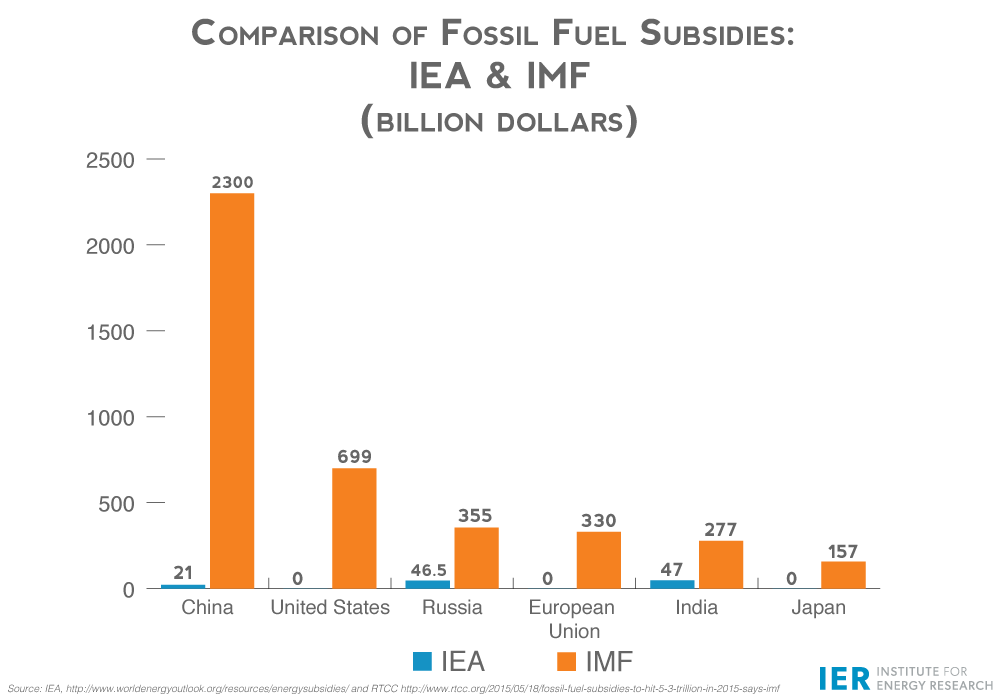 The IMF defines fossil fuel energy subsidies as the difference between what consumers pay for the energy versus its costs that include external costs imposed from fossil fuel consumption on the environment plus a country’s value added or sales tax rate. IMF adds theoretical external costs for global warming; air pollution; and the effects on traffic congestion, traffic accidents, and road damage. Some of these supposed external costs, it should be noted, would exist even if all transportation were powered by solar powered vehicles. (For example, even if all cars were electric, there would still be congestion, accidents, and road damage.) To ascribe all such external costs to fossil energy reflects more the makeup of existing transportation energy sources than it does any objective assessment.

The distributions of the various components of the $5.3 trillion that IMF estimates for 2015 is given in the chart below. Note that local pollution costs represent over half the total and global warming represents less than a quarter of the total, while the actual financial costs represent just 6 percent of the total. 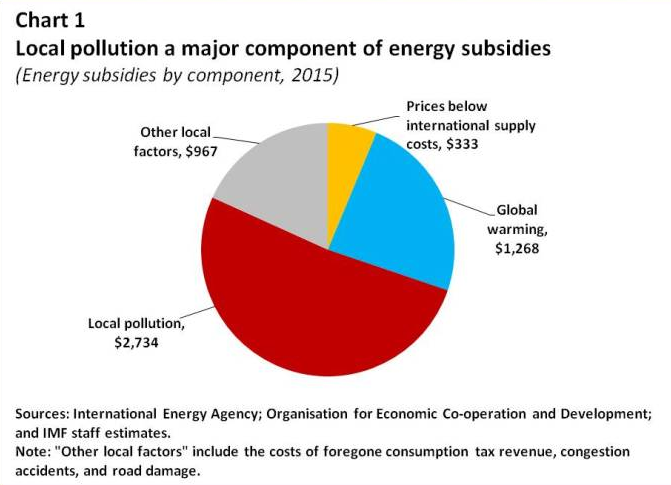 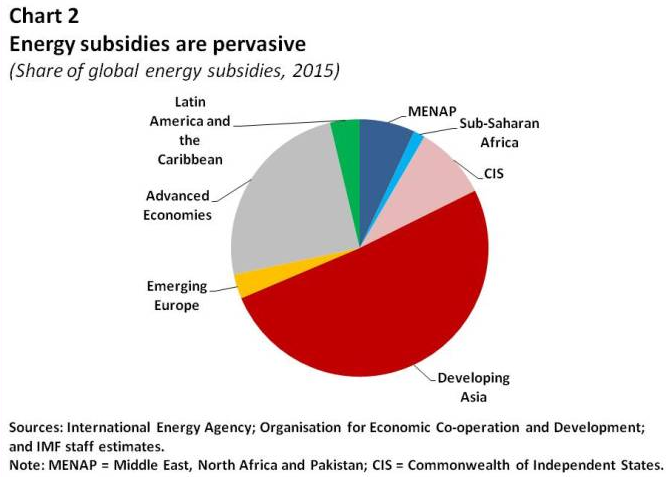 The IEA calculates fossil fuel consumption subsidies because many governments, mostly in developing countries, pay part of the cost of the country’s consumption of fossil fuels. For example, in China and India, the governments pay $11.8 billion and $36.6 billion, respectively, of the actual financial cost of the oil consumed in the country. In other words, the population in those countries pay less than the world’s market price for oil because the government offsets part of the expenditure. IEA believes the citizens of these countries should have to pay the actual costs of the fossil fuel energy that they consume.

The IMF, on the other hand, not only calculates the difference between the actual supply cost and the end-use price borne by the country’s population but also adds artificial costs for carbon emissions, air pollution, and traffic congestion, making the fossil fuel “subsidies” more than 10 times greater than actual financial cost. IMF’s intent is to make fossil fuels appear to cost so much that people will stop using them rather than pay the exorbitant costs that it calculates. Unfortunately, if the world stopped using fossil fuels, its citizens would be put back in the dark ages with little of the comforts we know today—the damages would be well in excess of $5.3 trillion and millions of people would likely starve to death.

Since the IMF is made up and funded by governments, including the United States, which are seeking to raise funds to spend from carbon pricing or trading schemes, it is easy to understand why it has adopted this methodology, which any fair observer realizes distorts the meaning of the word “subsidy” to confuse the average person. If the IMF can allege a cost is being occurred each time someone uses the energy that make our lives better, it might be able to justify a new enormous source of cash to spend on more government. From the looks of the IMF’s $5.3 trillion assessment, it is off to an audacious start to its campaign to tax energy use.