On November 12, 2014, the International Energy Agency (IEA) released its World Energy Outlook 2014 with forecasts of world energy supply and demand to the year 2040.[1] Global demand for energy is projected to increase by 37 percent by 2040 despite no growth in energy demand from the major developed nations (countries of the Organization for Economic Cooperation and Development (OECD)) throughout the forecast period. Oil, coal, and natural gas remain major energy sources throughout the forecast representing almost 75 percent of total demand in 2040, despite coal and oil demands reaching a plateau by 2040. Natural gas demand, however, increases by over 50 percent by 2040.

The global distribution of energy demand changes over the forecast period with energy use generally flat in Europe, Japan, Korea and North America, and rising consumption concentrated in the rest of Asia (60 percent of the global total), Africa, the Middle East and Latin America. In the early 2030s, China becomes the largest oil-consuming country, overtaking the United States, but in that decade its energy growth slows dramatically. India, Southeast Asia, the Middle East and sub-Saharan Africa begin to take over as the major consumers of global energy demand growth in the later part of the forecast period.[2]

By 2040, about 25 percent of the world’s energy supply comes from low-carbon sources, including nuclear and renewable energy,. This growth in share of low carbon sources, however, does not curtail the growth in global energy-related carbon dioxide (CO2) emissions, which increase by 20 percent. 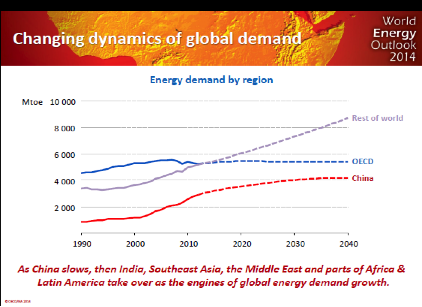 Global oil demand is projected to increase from 90 million barrels per day in 2013 to 104 million barrels per day in 2040, an increase of over 15 percent, due to increased oil use for transportation and petrochemicals. Oil demand reaches a plateau at the end of the forecast period due to high world oil prices and policy measures to constrain growth. Despite the number of vehicles in the world more than doubling by 2040, demand for oil in the transportation sector is expected to increase by only 25 percent due to the large number of vehicle sales subjected to efficiency standards (over 75 percent of global car sales). These efficiency standards suppress oil demand growth by 23 million barrels per day in 2040, which is more than the current oil production of Saudi Arabia and Russia. For each barrel of oil that the OECD countries no longer demand, however, the growing non-OECD countries consume two barrels more.

IEA cautions about complacency in oil supply due to the oversupply that exists now, which they argue will wear off, bringing the need for increased oil investment in the Middle East and instability there back to the forefront. The agency expects tight oil supplies in the United States to level off by the early 2020s and then to start to decline. IEA believes $900 billion per year is needed in upstream oil investment by the 2030s to meet global oil demand and is not sure that the investment will be forthcoming because of uncertainties in the oil supply market due to the: 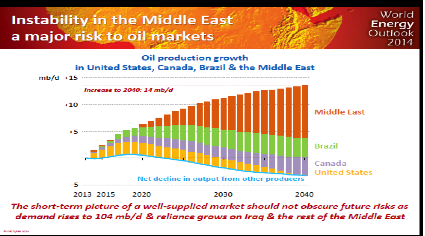 Natural gas demand increases by more than 50 percent by 2040—the fastest growth rate of the fossil fuels and the only fossil fuel growing significantly by 2040. China and the Middle East are the main regions that push natural gas demand higher, but new regulations in the United States limiting CO2 emissions in the electric generation sector increase natural gas consumption as well.

Natural gas production increases everywhere but in Europe with unconventional gas production accounting for almost 60 percent of global supply growth. IEA sees increased global trade in liquefied natural gas (LNG) offering protection against supply disruptions–the main uncertainty being whether its price can remain attractive to consumers while providing enough incentives to increase investment and thus production. IEA expects future gas supplies to be relatively secure due to the increasing number of international gas suppliers, a near-tripling of liquefaction facilities in the world, and flexibility in the ability of LNG to supply markets where gas is needed most. 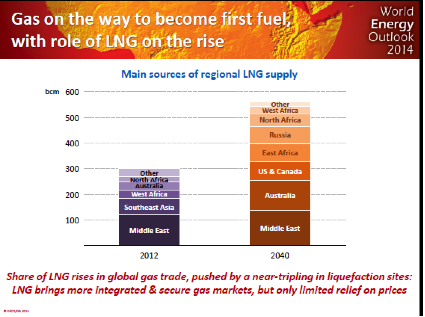 Global coal demand increases by 15 percent by 2040, with the largest increase (two-thirds) occurring during the first 10 years of the forecast period. Chinese coal demand is expected to increase to just over 50 percent of global production and then plateau, declining after 2030. IEA expects coal consumption in the electric generation sector of the United States to decline by more than a third due to the regulations mentioned earlier. As a result, India overtakes the United States as the second largest coal consumer before 2020 and surpasses China as the world’s largest coal importer soon thereafter. China, India, Indonesia, and Australia make up over 70 percent of the world’s coal production by 2040.

India’s power minister, Mr. Goyal, promised to double India’s use of domestic coal from 565 million tons in 2013 to more than a billion tons by 2019. India has the world’s fifth-largest reserves of coal and may denationalize commercial coal mining to accelerate its production. Over the last five years, India increased its coal-fired generating capacity by 73 percent, but coal mining increased just 6 percent, resulting in expensive coal imports, idle plants and widespread blackouts. Almost 300 million Indians do not have access to electricity, and millions of others reap its benefits only sporadically.[3] 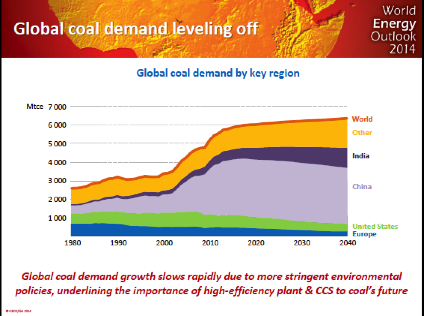 According to IEA, 7,200 gigawatts of electric generating capacity will need to be built worldwide between now and 2040 to supply the growing demand for electric power and to replace retiring capacity that totals about 40 percent of the current fleet. Renewable generation increases its share to one-third of the global generation market by 2040—a larger share than coal-fired generation–and accounting for almost half of the increase in total electricity generation by 2040. Wind power represents the largest share of growth in renewable generation worldwide (34 percent), followed by hydroelectric power (30 percent) and solar power (18 percent). IEA notes that this increase in the share of wind and solar power to the generation mix worldwide creates challenges to their integration from both a technical and a market standpoint. 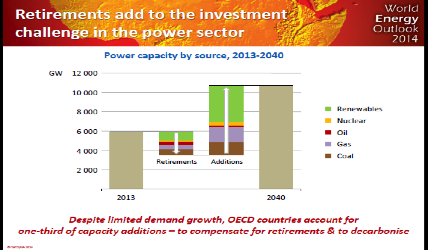 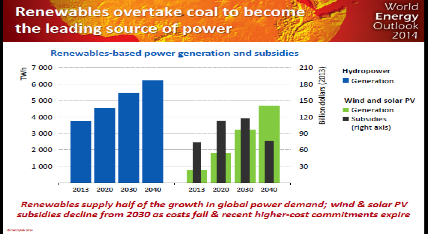 The increase in renewable energy technologies (electric generation and biofuels) is helped by global subsidies totaling $120 billion in 2013. IEA expects the consumption of biofuels to more than triple to 4.6 million barrels per day in 2040 from 1.3 million barrels per day in 2012. In 2040, IEA expects biofuels to represent 8 percent of transportation fuel demand. Advanced biofuels increase their market share after 2020 in the IEA forecast, and make up almost 20 percent of biofuels supply in 2040.[4]

Nuclear power capacity is expected to increase by almost 60 percent from 392 gigawatts in 2013 to over 620 gigawatts in 2040. Its share of global electricity generation, however, increases by just one percentage point, to 12 percent, from 11 percent in 2013. Growth in nuclear capacity is concentrated in markets where electricity prices are regulated and where utilities have government backing to facilitate investment. China accounts for 45 percent of the growth in global nuclear generation by 2040, and India, Korea, and Russia combine to make up an additional 30 percent. In the United States, nuclear generation is expected to increase by 16 percent, and in the European Union, to decline by 10 percent. Japan reopens some of its nuclear reactors, but does not attain the generation levels reached prior to the Fukushima accident. 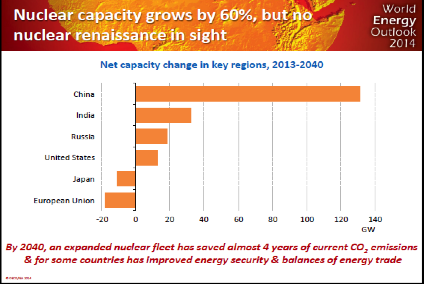 About 200 of the 434 nuclear reactors in the world operational at the end of 2013 are retired by 2040, with the majority in Europe, the United States, Russia and Japan. IEA notes that governments need to provide clarity regarding the regulatory steps to extending the operating life of nuclear units well before possible plant closures to allow existing nuclear plants to continue operation. IEA estimates the cost of decommissioning the nuclear plants expected to be retired by 2040 at over $100 billion. These costs are uncertain due to the limited experience at decommissioning nuclear plants worldwide. 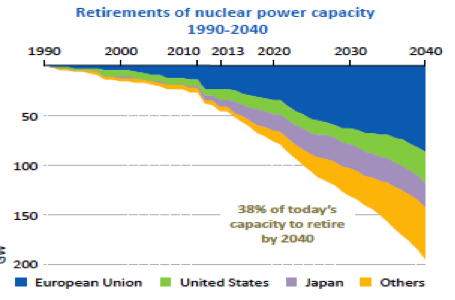 IEA notes some of the benefits of nuclear power:

IEA examined a low nuclear case where global nuclear capacity is 7 percent lower than in 2013. In that scenario, countries that use nuclear power see their energy security indicators deteriorate. In the low nuclear scenario, the share of energy demand met by domestic sources is reduced by 13 percentage points for Japan, by 6 for Korea, and by 4 for the European Union.

Unlike other outlooks, IEA sees greater uncertainty and more renewable energy in future global energy markets. The outlook still expects fossil fuels to supply the majority of energy demand in 2040 (about 75 percent), but oil and coal demand plateau at the end of the forecast period due to energy efficiency gains and government regulations. The agency cautions the world regarding complacency in the oversupply of oil because investment in oil wells will be needed in the Middle East in the future. It also suggests that countries with nuclear power should make clear its rules for life extension of existing units to avoid unnecessary plant closures.

The IEA projection is also striking because it sees essentially no growth in demand from OECD nations–a first. Historically, there has been a linkage between economic growth and rising energy consumption, although increasing efficiency has had substantial success at tempering that relationship. IEA may be indicating that the wealthy developed world is going to get much more efficient and not need the energy that has traditionally fueled economic improvements. On the other hand, it may be implicitly acknowledging that government energy policies and regulations will undermine the economic status of the developed countries as a part of the overall world economy. If that is the result, policymakers should be following its forecasts closely, because serious decisions will need to be made across the public policy front.

[1] International Energy Agency, Signs of stress may not be ignored, IEA warns in its new World Energy Outlook, November 12, 2014, http://www.iea.org/newsroomandevents/pressreleases/2014/november/signs-of-stress-must-not-be-ignored-iea-warns-in-its-new-world-energy-outlook.html

EPA’s Next Ozone Proposal Could be Most Expensive Regulation Yet