Critics of electrified America have mixed emotions this time of the year. It may be the season of good cheer and goodwill toward all, but it is also the time of the most conspicuous of energy consumption: billions of stringed light bulbs on buildings and trees with no other purpose than nighttime beauty.

Holiday lighting is a great social offering—a positive externality in the jargon of economics—given by many to all. While energy foes such as Paul Ehrlich have riled against “garish commercial Christmas displays,” enemies of industrial progress dare not make holiday lighting a social issue.

Yet blazing December nights is a glaring exception to the alms of eliminating discretionary energy usage to help save the world. If holiday energy guzzling is forgiven, why not excuse outdoor heating and cooling, one-switch centralized lighting, and instant-on appliances that “leak” electricity?

Time spent with multiple switches, or waiting on appliances to warm up, wastes the scarcest and one truly depleting resource: human time. And surely extra energy use for comfort and convenience has priority over purely celebratory uses of power.

What about the holiday humbug that celebratory electricity depletes future fossil-fuel supplies and fouls the air? Good tidings abound!

Human ingenuity continues to unlock mineral plenty despite the heavy hand of government in the United States and in neighboring countries. As documented in a report by the Institute for Energy Research: 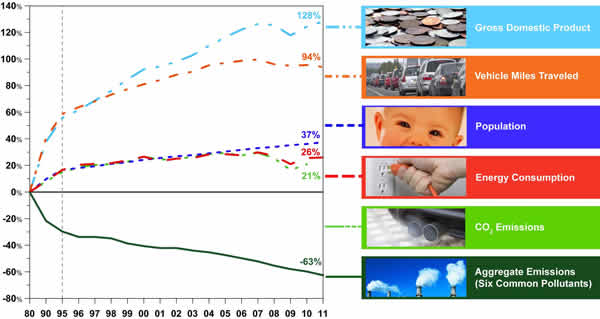 This decline in criteria pollutants was accomplished while fossil energy usage increased by one fourth, reflecting a population growth (one-third in the last thirty-one years) and a near doubling of vehicle-miles travelled.

The wealth created from affordable, plentiful energy–the dense, reliable energy of oil, gas, and coal–provides the primary means for societies to improve the environment in myriad ways. Wealth is environmental health, which explains why increasing energy usage and environmental improvement have gone hand in hand in the Western world.

There is much to be thankful for this holiday season with our energy economy. But thoughts about the less fortunate should be with us too. An estimated 1.3 billion people in the world (nearly one in five of us) do not have electricity for lighting, heating, cooling, cooking, or water purification. A Christmas tree for us is likely to be firewood for those living in energy poverty.

For these people, there could be no greater holiday gift than affordable electricity itself, explaining why the developing world has flatly rejected proposals from environmental elites to forsake future energy usage in the quixotic quest to “stabilize climate.” The good news from the recent United Nations climate negotiations, as all the previous ones, was failure to agree on international carbon rationing, meaning more energy rather than less for those who need it most.

Energy production and usage is good—no, wonderful–for comfort, convenience, good mood, and even celebration. May one and all in good conscience enliven this holiday season with lights aplenty. With conventional fuels and energy technologies continuing to improve, Americans can look forward to even more energetic celebrations and shared goodwill in the holidays ahead.

The Myth of Wind and Solar Energy: They Are Not Free