According to the Organization for Energy Cooperation and Development (OECD), China will become the world’s largest economy by 2016, surpassing the United States. The OECD sees China’s economy growing at 8 percent over this decade assuming its current rate of investment and reform.[i] For economic growth, a robust energy sector is needed to provide affordable, abundant, and reliable sources of energy supplies. That is why China is investing in building clean coal generating technology and providing loans to oil rich countries in return for future supplies of oil. China is already the largest consumer of energy and emitter of carbon dioxide emissions in the world.

China’s economy grew at 7.8 percent last year—the slowest rate in a decade. But, OECD sees it growing to 8.5 percent this year and 8.9 percent next year, averaging 8 percent over this decade. With that kind of economic growth, China will overtake the United States as the world’s largest economy by 2016, a position the U.S. has held for a century. Whether or not it happens by 2016, forecasters expect it will occur in this decade.

One reason that the OECD sees the growth potential is that China needs to expand its infrastructure since rail and road capacity and housing needs to be more fully developed for China to be at the point that other major economies achieved at similar stages of development. But, the OECD cautioned that China also needs state companies to compete in more open markets, and ease the movement of migrants into cities in order to keep the economy growing strong. The gap between the prosperous, booming cities and the poor rural areas has been expanding since the 1990s. According to the United Nations, 13 percent of China’s people live on less than $1.25 per day while average annual disposable income in the cities is about $3,500. China recently reported that income inequality peaked in 2008 and has narrowed since then, but many are skeptical. China has 2.7 million millionaires and 251 billionaires (in U.S. dollars).[ii]

China has been making deals with oil rich countries such as Venezuela, providing loans in return for future supplies of oil. One of its most recent deals is with Russia. Russia’s oil company, Rosneft, is seeking to borrow up to $30 billion from China in exchange for possibly doubling oil supplies that would make China the largest consumer of Russian oil. Rosneft wants to borrow the money in order to complete a $55 billion acquisition of TNK-BP to become the world’s largest listed oil producer.[iii] Russia has been steadily increasing its crude exports to Asia with flows expected to total around 15 percent of Russian oil exports this year via pipeline to China and to the Pacific coast. The increased shipments to Asia mean reduced shipments to Europe.

Also, China has been courting Africa for decades to satisfy its growing demand for raw materials and energy. Last year, China offered $20 billion in loans to African countries over the next three years as a no-strings-attached aid policy. However, others see China’s aid and loans as a means to improve their prospects of gaining access to resources like oil, copper and timber.[iv] Their immense foreign exchange reserves earned during the rapid growth of their economy makes the likelihood of further investments likely.

Clearly, China needs oil to fuel its growth in vehicles and transportation. The number of passenger cars in China is expected to reach 400 million by 2030, up from 90 million today.  China has already surpassed the United States as the largest vehicle sales market in the world.

China gets over 70 percent of its electricity generation from coal. According to the National Energy Technology Laboratory, China is building at least one coal-fired unit a week. China currently produces and consumes more coal than any other country in the world. Although China’s coal reserves are much smaller than ours, it consumes almost 4 times the amount of coal that the United States consumes and must import coal because its current coal production cannot satisfy its own demand.[v] In 2011, China consumed more than 3.8 billion short tons of coal while the United States consumed 1 billion short tons.[vi] As a result, China’s five north-western provinces are expected to increase coal production by 620 million metric tons by 2015, generating an additional 1.4 billion metric tons of greenhouse gases a year.[vii] 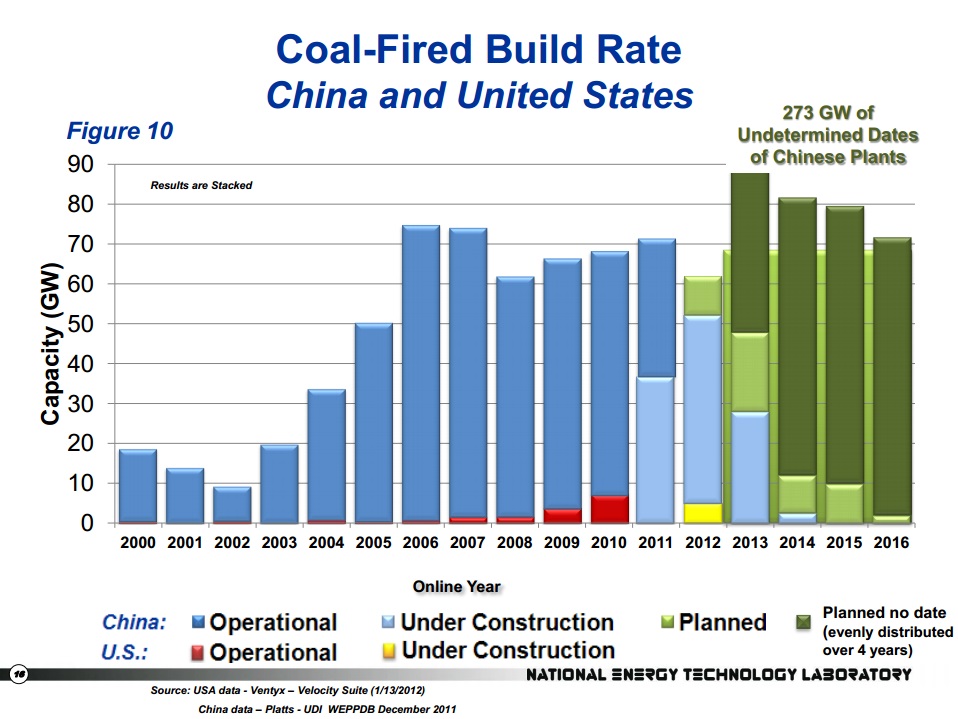 China has a pollution problem and it has nothing to do with carbon dioxide. Carbon dioxide is invisible, odorless, and non-toxic.

China’s pollution emissions come from old coal-fired plants and its vehicles.[viii] Since 1970, the United States has dramatically reduced its criteria pollutants that are toxic. But, China has been unable to clean up its toxic emissions because it needs to provide energy to its population, many of whom do not even have access to electricity, and because efforts to reduce these emissions have met resistance from Chinese energy companies that would need to comply with the mounting demand for more electricity. Further, penalties are low for non-compliance: fines are generally capped around $16,000, which is not much of a deterrent.

According to Beijing officials, vehicle emissions account for 22 percent of the main deadly particulate matter in the air, known as PM 2.5, and another 40 percent is from coal-fired factories in Beijing and nearby provinces.[ix]

But, China’s pollution problems are severe. More than 16,000 dead pigs have been found floating in rivers that provide drinking water to Shanghai and smog akin to volcanic fumes surround Beijing. 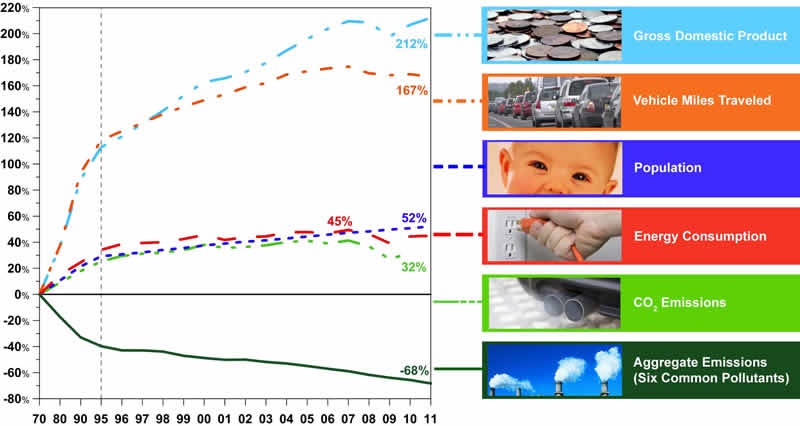 While China cannot afford to replace its old coal-fired technology, it is building state-of the-art coal-fired plants that have reduced criteria pollutants dramatically. In fact, as the New York Times has reported, China is actually constructing some coal plants that are cleaner than those allowed to be built in the United States.[x]  An irony of our current regulatory policy may be that China will ultimately become the world’s supplier of the most advanced clean coal plants, despite the large size of the U.S. coal resource base.

China is also constructing renewable technologies, which is in line with the government’s plan to have clean energy account for 11.4 percent of electricity consumption by 2015 so as to reduce pollution from its coal-fired power plants.  China first ventured into the renewable arena when European countries helped China via the Clean Development Mechanism of the Kyoto Protocol, where developed countries that signed the Kyoto Protocol could get credit for funding development of low carbon emitting projects in the developing countries. Learning quickly, the Chinese soon became major producers of renewable technologies, particularly in manufacturing solar panels — cutting their price dramatically. Currently, there is a global oversupply of solar panels and many countries, particularly in Europe, are cutting renewable subsidies. This past December, China’s State Council indicated that it would stop funding  domestic solar-panel makers, instead encouraging mergers among its major companies and allowing the market to determine winners and losers.[xi]

To fund a rapid expansion of manufacturing capacity, the Chinese solar industry’s debt grew rapidly between 2009 and 2011. But, because solar demand has not kept up with the growth in manufacturing, solar-panel manufacturers had to cut costs and write down investments while they attempt to find new markets. Suntech Power Holdings Company, one of the world’s largest solar-panel suppliers, has to repay more than a half billion dollars of debt held by international investors. The company last reported a net cash position of $244 million as of August 31 and debt of about $2 billion. At the end of the first quarter of last year, China’s 10 largest solar companies, including Suntech, had a combined debt of $17.5 billion. Beijing is offering indirect support to solar companies in the form of new policies and incentives for solar-power development and to help boost demand for solar panels.

China, after building scores of factories that lowered solar panel prices 20 percent in the past year, is expected to become the biggest consumer of the solar panels after doubling its 2013 target for new projects in January. As such, it is forecast to unseat Germany as the largest solar market this year.

The Chinese government expects 10 gigawatts of new solar projects in 2013, more than double its previous target and three times last year’s expansion. The country plans to install 35 gigawatts by 2015, compared with a previous goal of 21 gigawatts.[xii]

According to the OECD, “China has weathered the global economic and financial crisis of the past five years better than virtually any OECD country and than many other emerging economies.” And, it knows that it needs affordable, reliable, and abundant energy to keep fueling its economy. The OECD expects China’s economy to grow at an average of 8 percent a year for the remainder of this decade. To supply the energy, China is building coal-fired power plants, obtaining future agreements for oil supplies through aid and loans to foreign companies, importing coal and other fuels, as well as building renewable technology. But, the country is deep in haze caused by pollution from old coal-fired power plants and vehicles. Companies in China are avoiding regulations to decrease these emissions. Meanwhile, these pollution emissions are growing and so are the country’s carbon dioxide emissions.  Politicians who think China’s energy policy is a model for the United States need to look at pictures of Beijing and statistics regarding China’s emissions.