Last week the IMF released a report that called on governments around the world to stop subsidizing energy. Initially we were shocked—as proponents of letting the market determine the allocation of resources, we at IER have opposed all energy subsidies for years. Of course, it turns out that the IMF is really calling for the government to subsidize energy forms that don’t currently pass the market test, and to tax the daylights out of those that do. What’s more, even taking the standard “social cost of carbon” framework at face value, the IMF’s proposed tax hikes are far higher than can be economically justified.

Government subsidies of gasoline, electricity and other energy sources amount to about $1.9 trillion a year and should be ended or offset with taxes used to battle climate change and pay for social programs, the International Monetary Fund said Wednesday in a major foray into the global warming debate.

From top energy users such as the United States and China to the poorest of the poor, the fund said countries should be more aggressive in developing energy tax and pricing policies that reflect the true cost of fossil fuel use, including such “externalities” as pollution and the steps needed to mitigate the effects of a warming climate.

For the United States, the IMF estimated that would require a $1.40 levy per gallon of gas and other fees totaling more than $1,400 per person each year — around $500 billion in total, or more than 3 percent of the country’s annual economic output. [Bold added.]

These numbers are shocking enough, but wait till you see the computational gymnastics the IMF authors had to go through to generate them. Even the “consensus” climate change analyses don’t give anywhere near those levels of a “corrective” tax.

First, the Layman’s Notion of “Subsidy”

Before tackling the more esoteric topic of carbon emissions and negative externalities, let’s walk through the more conventional understanding of a government “subsidy.” The IMF study does have a modest point: governments around the world, particularly in oil-rich countries, often curry favor with their subjects by giving literal subsidies to gasoline consumption. Any student of free-market economics knows that this is an inefficient arrangement; the government doesn’t make its people wealthier just by taxing them and then giving the money back in the form of gas subsidies, it merely distorts relative price signals and improperly encourages gasoline usage.

Earlier this year, IER published a detailed blog post on these explicit subsidies to energy consumption. Here is a graphic showing how the problem is primarily focused on energy-rich yet relatively poorer countries: 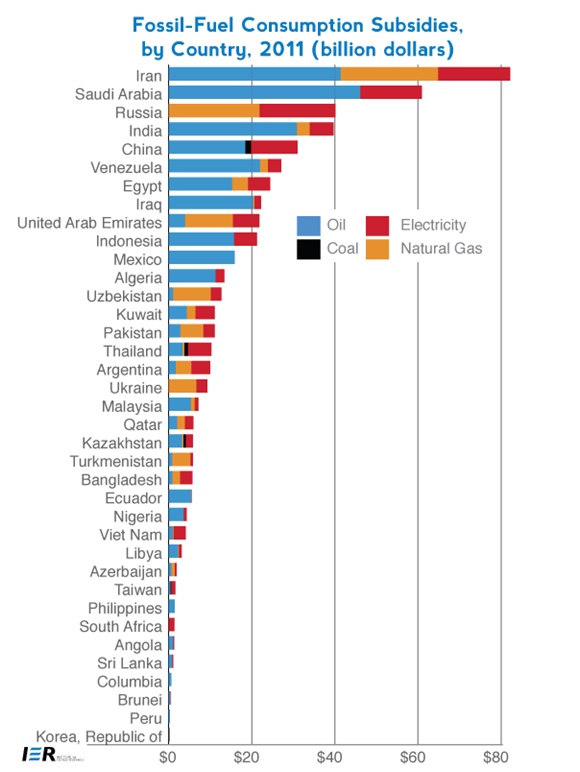 Yet the unfortunate habit of governments to subsidize gasoline and electricity consumption is not at all the situation in, say, the United States. Here, the federal and state governments explicitly tax gasoline sales, and quite steeply. As the Energy Information Administration (EIA) explains, in February 2013 explicit taxes constituted 11 percent (on average) of the total price at the pump: 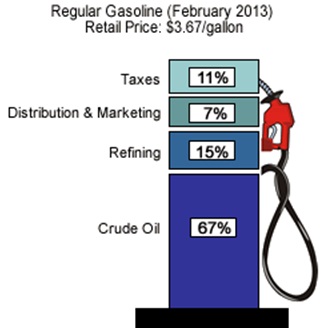 It’s not just end-user taxes on gasoline, either. “Big Oil” companies in particular pay massive amounts of tax revenue to governments in the United States. For example, this Forbes article explains that in 2011:

ExxonMobil in 2011 made $27.3 billion in cash payments for income taxes. Chevron paid $17 billion and ConocoPhillips $10.6 billion. And not only were these the highest amounts in absolute terms, when compared with the rest of the 25 most profitable U.S. companies…the trio also had the highest effective tax rates. Exxon’s tax rate was 42.9%, Chevron’s was 48.3% and Conoco’s was 41.5%. That’s even higher than the 35% U.S. federal statutory rate, which is already the highest tax rate among developed nations. [Bold added.]

The pattern held up last year (2012) as well, with Exxon and Chevron still holding the #1 and #2 slots for most income tax payments to the federal government, while Conoco had fallen to #6.

So we see that the “subsidies to Big Oil” don’t mean the taxpayers are actually losing money to these enterprises—on the country, the major energy producers pay massive amounts on net into the government’s coffers. At the same time, many of the loudest proponents of “ending energy subsidies” are actually champions of, well, energy subsidies, when it comes to the forms of energy they happen to like—so-called “green energy” like wind and solar.

As the Washington Post piece explained, the IMF report calls for the United States government to impose a very large penalty on fossil fuels, in order to correct for alleged negative externalities from their use. Ostensibly such a move would promote economic efficiency, because it would allow the users of coal, oil, and natural gas to fully take into account the true costs of their consumption patterns.

First, note the rhetorical trick. By calling for the U.S. government to end “subsidies” to fossil fuels, the study implies that these energy types are currently sticking it to the taxpayer. Yet this is backwards, as we’ve already shown. (It’s boondoggles like the Obama Department of Energy “green” loan program that actually hurt the taxpayer.) The way the IMF and its allies are using language here, enacting a “corrective” tax on coal, oil, and natural gas gets us to the neutral baseline, and so the failure to tax them sufficiently—even though they currently pay boatloads in taxes—is taken as an implicit subsidy.

Yet it gets worse. Most readers probably assume that the IMF proposal is based on the solid, “consensus,” peer-reviewed climate change literature. Au contraire, mon frère. As I pointed out in a recent post, even the Obama Administration’s own Working Group concluded that the best-guess for the “social cost of carbon”—where this calculation only considered climate change, and if we use an entirely reasonable 5 percent discount rate—was a mere $5/ton.

So how does the IMF study come up with such whopping tax proposals? Let’s walk through their Appendix Table 1 (page 44) to see the breakdown of their fuel tax suggestions: 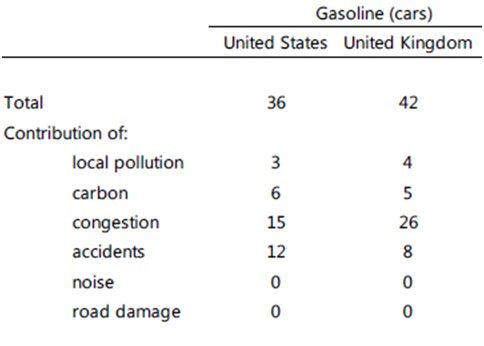 The proposal for the United States is 36 cents per liter, which works out to about $1.36 per gallon. And yet note that only 6 cents—one-sixth of the total—is attributed to the negative externality from carbon dioxide. The balance isn’t even due to air pollution either; that account for only 3 cents, or one-twelfth, of the total.

No, the major drivers in the IMF estimate are “congestion” and “accidents.” This is simply astounding, and shows the lengths to which economic science can be bended to fit a preconceived political agenda.

Even taking the entire “Pigovian” externality framework on its own terms, taxing gasoline because of road congestion is an incredibly blunt instrument; it’s like taxing forks to fight obesity. The reason we have traffic jams is that the governments that own roads do not charge market prices for their use. If the governments in the United States would privatize the roads and highways they control, letting private owners set tolls based on supply and demand (and allow tolls to be collected to build more roads), traffic jams would be a thing of the past. Look at the crowds on a government-run subway, versus a privately-owned commercial airplane, to see the difference.

A similar analysis shows how silly it is to tax gasoline because of car accidents. Here too, there is a very weak link on the margin between gasoline consumption and the danger one imposes on others by driving. If someone drives a fuel-efficient Prius, is he really much less likely to cause an accident than someone driving a similar vehicle with a conventional engine?

There’s another way to look at this issue. According to the IMF table, the mere fact of driving a vehicle on the road in the United States causes 27 cents per liter—which works out to $1.02 per gallon—in negative externalities in the form of road congestion and traffic accidents. Well, that means driving a hybrid or an electric car would also cause a similar amount of negative externalities, if we convert to the average time a vehicle spends on the road. In light of such huge negative externalities from driving, the very least the U.S. government can do is to stop explicitly subsidizing hybrid and electric car technology, in lieu of an outright tax on them (perhaps per mile traveled).

The IMF uses legitimate economic concepts—such as ending subsidies and promoting economic efficiency—and yet somehow transforms them into calls for giant tax increases. Moreover, in order to get the desired taxes, they need to move well beyond “climate change” and into other alleged sins of fossil fuels that are completely indefensible, even on their own terms. If any proponent of the IMF study doesn’t likewise call for a large new tax on hybrid and electric cars, it is proof that the issue isn’t really about economic efficiency or externalities—it’s about the government pushing particular forms of energy that some people happen to like.