President Obama came into office promising to bankrupt coal-fired power plants, a promise he recently reiterated in his “climate action” speech at Georgetown University. The Obama administration has implemented a number of regulations that drive up the cost of using coal, such as the Mercury and Air Toxics Standards (MATS). Additionally, the administration has a number of regulations in the pipeline to further increase coal costs, such as the New Source Performance Standards for Greenhouse Gas Emissions (NSPS) from New Fossil-Fuel Power Plants. But one overlooked part of the EPA’s anti-coal agenda is the Regional Haze program.

In 1977, Congress passed amendments to the Clean Air Act which created the Regional Haze program.  The program is purely aesthetic and is not concerned with health threats. The Regional Haze program requires states to develop plans for mitigating pollution that impairs visibility in 156 national parks and wilderness areas dubbed Class I Areas, including the Grand Canyon, Yosemite, the Great Smokies, and Shenandoah. The Environmental Protection Agency (EPA) describes haze as:

“Haze is caused when sunlight encounters tiny pollution particles in the air. Some light is absorbed by particles. Other light is scattered away before it reaches an observer. More pollutants mean more absorption and scattering of light, which reduce the clarity and color of what we see. Some types of particles such as sulfates, scatter more light, particularly during humid conditions.”

According to the EPA, air pollution that causes haze comes from a variety of sources, including windblown dust and soot from wildfires. Since haze is not considered a public health threat, but rather an issue of aesthetics, Congress authorized states to take the lead in mitigating haze. Despite clear congressional intent to let states administer the program, a new report commissioned by the U.S. Chamber of Commerce reveals how EPA is exploiting the Regional Haze program to impose enormous costs on coal-fired power plants for imperceptible aesthetic benefits.

The Regional Haze program requires states to submit to the EPA specific emissions controls plans for reducing haze and improving visibility. The Clean Air Act lets states take the lead in developing, implementing, and monitoring visibility in public parks and wilderness areas.[1] In addition, EPA regulations describe the process by which states—not the EPA—determine which emission control technologies to impose on power plants near affected areas, known as Best Available Retrofit Technologies (BART). Federal courts have admonished the EPA twice for violating state authority over the Regional Haze program.[2]

Defying statutory intent, the EPA inserts itself into the process of developing regional haze controls through lawsuits from environmental groups. In several cases, such groups have sued EPA alleging that the agency failed to perform its due diligence to review state Regional Haze proposals. Instead of defending the lawsuits, however, EPA settles the cases with self-imposed deadlines for considering the state proposals. Then, as the Chamber describes it, what EPA does next “is Washington politics at its worst.” On the eve of the self-imposed deadlines, EPA claims it could not approve the states’ plans due to “procedural problems.” But since states do not have enough time to correct the alleged problems, the agency claims it has no choice but to impose its preferred (and more costly) emissions controls.

In New Mexico, for example, state regulators submitted a regional haze plan to the EPA in July 2011 after four years of deliberation. But the EPA did not even consider New Mexico’s $17 million plan because the agency said it was rushing to meet a September 2011 deadline negotiated between EPA and the WildEarth Guardians. In August 2011, the EPA imposed emission controls on New Mexico, without input from state officials, at a cost of $104 million per year, which was more than six times as costly as the state’s plan. 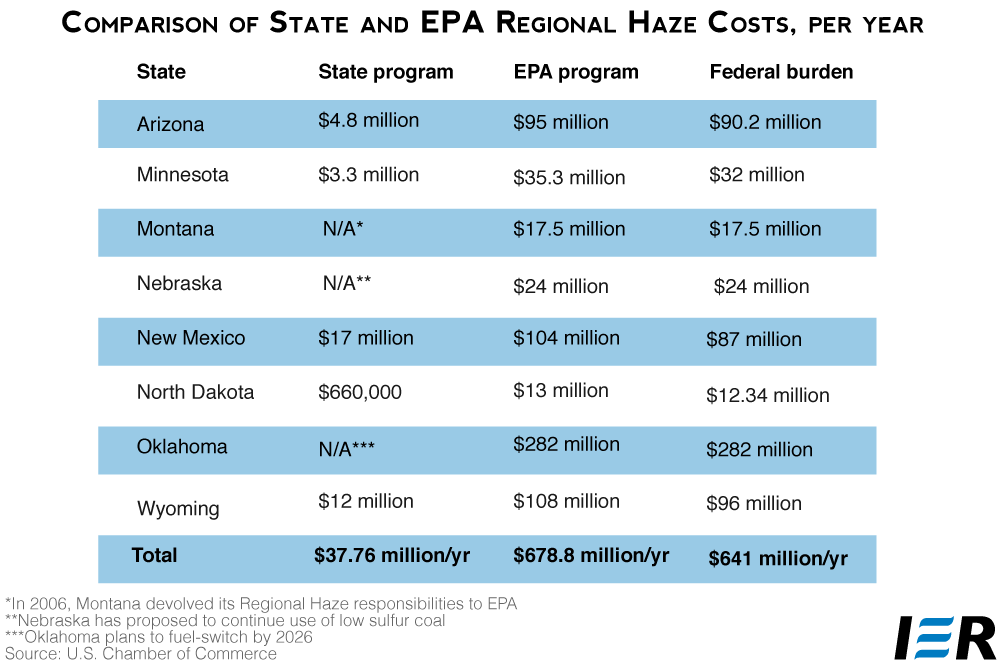 In fact, the Chamber warns that no states are out of the EPA’s reach: “In the long term, EPA’s abuse of its Regional Haze authority could present a persistent problem for all states…It is thus imperative for states to act now to check EPA on Regional Haze, thereby preserving the structure established by Congress and ensuring the balance of environmental federalism.”

The Chamber report reveals how far the EPA has strayed from its original mission of preserving scenic views at national parks. The following chart, the data of which was culled from the Chamber’s report, shows a list of coal-fired power plants that the EPA’s Regional Haze program will negatively impact: 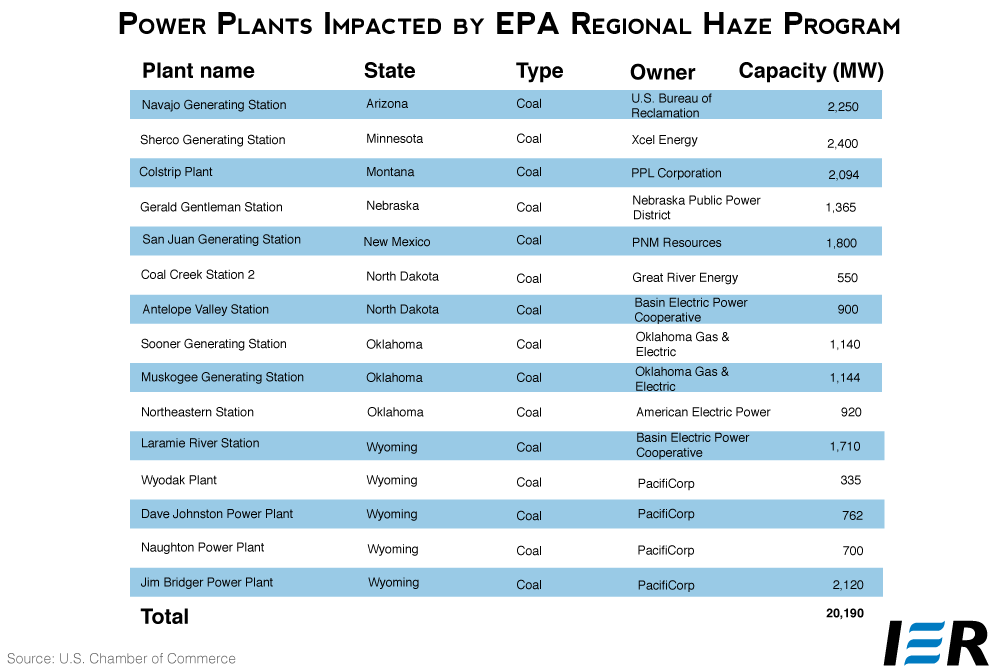 The EPA’s Regional Haze program will impose expensive emissions controls on at least 20 GW of electrical capacity at 15 power plants in 8 states, which amounts to about 6 percent of the U.S.’s coal-fired generating capacity. In the case of the Northeastern Station plant near Oologah, Oklahoma, EPA regulations are forcing one of the coal-fired units into early retirement in 2017. The plant’s other coal-fired unit will retire in 2026.

Unfortunately, the Regional Haze program merely scratches the surface. An Institute for Energy Research study finds that the EPA’s Mercury and Air Toxics Rule (Utility MACT) and the Cross State Air Pollution Rule (CSAPR) will force more than 34 GW of electrical generating capacity into retirement. Most of these retirements will come from coal-fired power plants, shuttering over 10 percent of the country’s coal-fired generating capacity. Moreover, many eastern states that are subject to CSAPR may also face a “double dip” of duplicative Regional Haze regulations. CSAPR is currently tied up in federal court, but the successor to the CSAPR regulation will almost certainly be as stringent as the rule currently being litigated.

Perhaps the biggest threat to coal-fired electricity is the EPA’s proposed carbon dioxide emissions rule for new power plants. In his recent “climate action” speech, President Obama set a September 20 deadline for releasing the delayed New Source Performance Standards (NSPS) to the public. The rule has been in the works since 2011, and the final rule is overdue according to the EPA’s proposed schedule. As the proposed rule for new plants is currently written, new coal plants would not be allowed to be built without carbon capture and storage technology, which has yet to be scaled up for coal-fired power plants. In other words, the EPA is in the middle of mandating a non-existent technology to bankrupt the coal industry but has been bogged down internally.

Coal is the largest source of electricity in America. Some states, like West Virginia, rely almost exclusively on coal for electricity. The administration’s regulations will significantly limit domestic coal supplies. This will result in higher energy prices for Americans who live in states that depend on coal to meet their energy needs.

The punitive cost of the EPA’s Regional Haze program becomes even clearer when compliance costs are weighed against visibility benefits. To compare the difference between state and federal emissions controls, the Chamber uses Winhaze 2.9.9 Software, a computer imaging software program that simulates visual air quality differences for various scenic areas. In every case, the visibility benefits of the EPA’s more expensive emissions controls are essentially imperceptible. Consider the following images of the Wichita Mountains Wildlife Refuge in Oklahoma:

Do Hurricanes or Obama Policies Cause Lower Production in the Gulf?