The Institute for Energy Research compared the impacts of hurricane activity and the Obama Administration’s oil policies on production in the offshore Gulf of Mexico to see which has the larger and more lasting impact. Although the shorter-term impacts of both are similar in size, Obama’s policies seem to have a more lasting effect. The Energy Information Administration (EIA) forecasts that offshore oil production in the Gulf of Mexico will not reach its peak 2010 production level at least through 2014, the farthest year out in the agency’s Short-Term Energy Outlook. 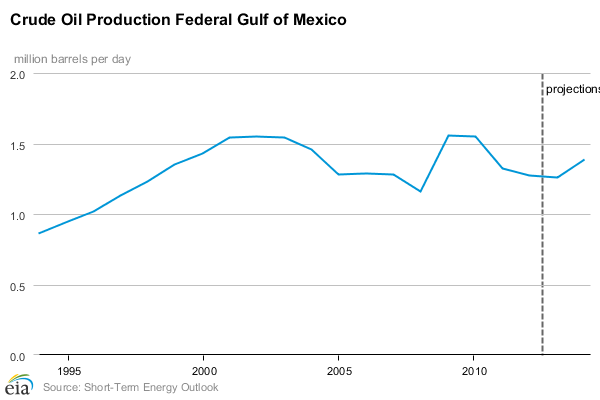 Impact of Hurricanes on Oil Production in the Gulf

Hurricanes Katrina and Rita impacted oil production in the Gulf in August and September of 2005, respectively.[i] According to EIA, the Atlantic hurricane season of 2005 was the most active season since accurate recordkeeping began in 1944 with 15 hurricanes, seven of which were classified as Category 3 or higher. Five of the major hurricanes passed through the Gulf of Mexico, significantly disrupting oil and natural gas production there. In particular, hurricanes Katrina and Rita crossed through the heart of the Gulf’s oil and gas-producing region, resulting in major production declines.

Severe tropical weather is generally classified by the intensity of the weather system’s wind speeds. Tropical depressions are cyclones having a maximum sustained wind speed of 38 miles per hour (mph), tropical storms have a maximum sustained wind speed between 39 mph and 73 mph, and hurricanes have wind speeds greater than 73 mph. In the United States, hurricanes are categorized on the Saffir-Simpson scale by maximum wind speed: Category 1 (74-95 mph), Category 2 (96-110 mph), Category 3 (111-130 mph), Category 4 (131-155 mph), and Category 5 (156 mph or greater). Hurricane season officially runs from June 1 through November 30 when ocean waters are warm enough to spawn tropical cyclones. However, the majority (about 75 percent) of major hurricanes (Category 3 or greater) occur in August and September, as did hurricanes Katrina and Rita.

The Gulf of Mexico region is crucial to U.S. production of crude oil and natural gas. Nearly all of the Gulf’s Outer Continental Shelf production occurs in the offshore area north of the southern-most tip of Texas and west of the Florida panhandle. Oil and natural gas platforms are especially concentrated south of the Louisiana coastline.

When severe weather threatens, platform operators protect workers and facilities: non-essential personnel are evacuated to onshore locations, movable equipment is secured to avoid loss, and the well is secured by plugging the wellhead or closing wellhead valves so that oil and natural gas cannot escape in the event that the platform is destroyed or dislodged from its moorings. The production that is forgone during these precautions is referred to as shut-in production.

Hurricanes Katrina and Rita passed directly over the outer continental shelf producing region, as the figure below demonstrates. 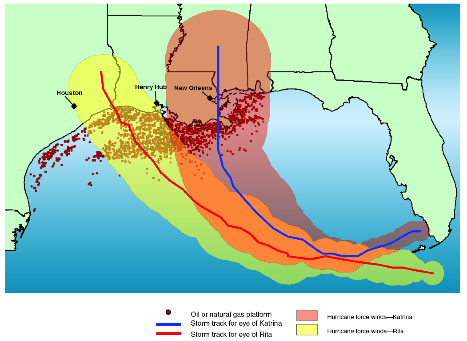 Hurricanes Katrina and Rita shut in about 70 percent of monthly production, as the figure below reveals. 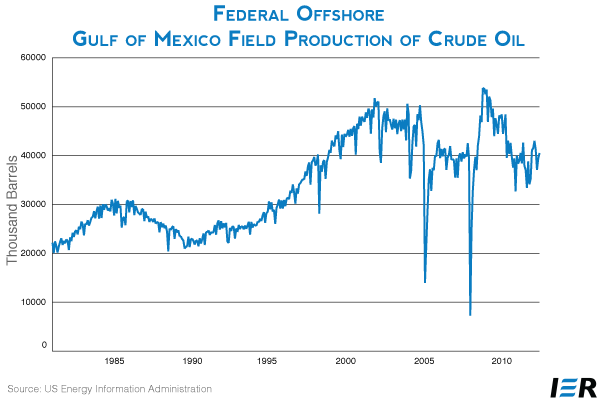 In 2008, the Gulf of Mexico experienced two more hurricanes. Hurricane Gustav hit landfall as a Category 2 hurricane on September 1, 2008 near Cocodrie, Louisiana. On August 27, oil companies began evacuating personnel from their oil rigs in the Gulf amid continued forecasts that Gustav would strengthen and move into the gulf. By August 30, almost 77 percent of oil production in the Gulf of Mexico had been shut in. By mid-day August 31, 96 percent of oil production had stopped.[i]

Hurricane Ike, the costliest hurricane in Texas history, made landfall on September 13, 2008 near Galveston, Texas, as a category 2 hurricane. Hurricane Ike’s winds, surge and waves caused destruction to storage tanks and pipelines. Similar to Hurricanes Katrina and Rita, operators in the Gulf of Mexico shut in operations in advance of Ike’s approach as a precaution. As a result, oil production in the Gulf of Mexico dropped by about 1 million barrels per day in the immediate aftermath of the hurricane, i.e. Hurricane Ike shut-in about 80 percent of monthly offshore oil production in the Gulf. By late November, however, oil companies had restored oil production to pre-Ike levels.[ii] 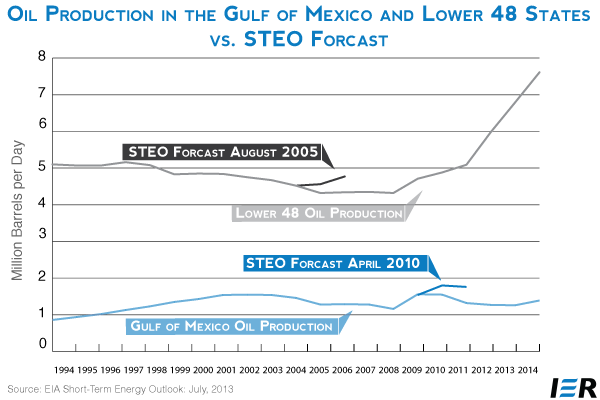 Regional Haze: Obama's Stealth Weapon in the War on Coal