Or Are New Coal Plants Dead?

According to statistics from the Energy Information Administration (EIA),  there were few new coal-fired plants constructed in the past several decades.  This is owed mainly to environmental opposition and the resulting legal and regulatory challenges, and the construction of natural gas units and, recently, wind turbines. But that trend may be changing somewhat. In 2009, both the National Energy Technology Laboratory (NETL)[i] and the EIA [ii] report new coal-fired plants came on line. According to NETL, 3,218 megawatts of coal-fired power plants came on-line in 2009, the most in one year since 1991. Further, NETL reports that 22 units are in the construction pipeline, while EIA reports that 5 new coal-fired units came on line in just the first 6 months of this year.

Not all is rosy for new coal-fired plants. Last year, coal-fired generation fell from 48.2 percent to 44.6 percent of total U.S. electricity generation,[iii] as low natural gas prices raised the gas share, and higher water levels and wind turbine capacity increased the renewable share. While some states remain favorable to new coal-fired generation, others are tied up in legal opposition and regulatory hold-ups for permits. Nevertheless, many folks agree that the present difficulty of putting cap-and-trade legislation through the Senate is having positive effects on new coal builds.[iv]

Past Announcements vs. Operational Units

NETL has tracked announcements versus actual construction of units over time and has noted that escalating costs and uncertainty about whether climate change legislation would pass have caused fewer coal-fired power plants to be constructed than were originally announced. NETL’s 2002 report, for example, noted that over 36,000 megawatts of coal-fired capacity were to be built by 2007, while only 12 percent of that amount (4,500 megawatts) was actually constructed during that period. The figure below shows the announcements of coal-fired plants versus actual plant construction over the past decade. 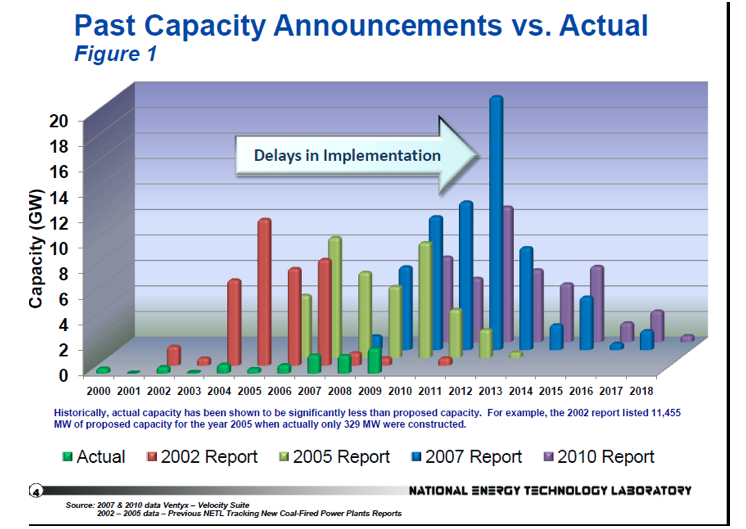 According to NETL, in 2009, 8 coal-fired plants, listed in the figure below, came on-line in the following states: Iowa, Kentucky, Colorado, Illinois, Nebraska, Texas, and Arizona. The laboratory categorizes future plant additions as announced, permitted, near construction, or under construction. A plant in the announced phase is in the early stages of development and may be filing for permits. A plant in the permitted phase either has two or more permits approved or its fuel or power contracts have been negotiated. A plant near construction has obtained approval and received the majority of its permits, has begun site preparation, and is contracting for vendors and Engineering, Procurement and Construction contractors. 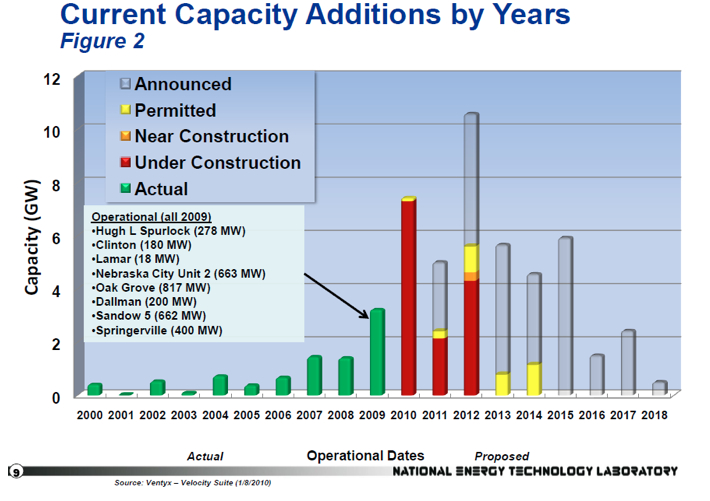 The EIA is a little less optimistic. In its Annual Energy Outlook 2010, it is forecasting that between 2008 and 2035, an additional 26,400 megawatts of coal-fired capacity will come on-line; of that, 15,600 megawatts are in the pipeline.[v] EIA’s assessment reflects their beliefs about regulatory and financial uncertainty in the cost of capital for coal-fired units, and assumes a 3-percentage point increase in the cost of capital when evaluating investments in greenhouse gas intensive technologies without carbon capture and sequestration (CCS) technology. The 3-percentage point adjustment is similar to a $15 per ton carbon dioxide emissions fee when investing in a new coal plant without CCS technology. The adjustment accounts for the possibility that the plants may need to purchase allowances or invest in other greenhouse gas emission-reducing projects that offset their emissions in the future.[vi]

The International Energy Agency is a little more optimistic than the EIA in its World Energy Outlook 2009, forecasting an additional 35,000 megawatts of coal-fired capacity above 2007 levels by 2030.[vii] 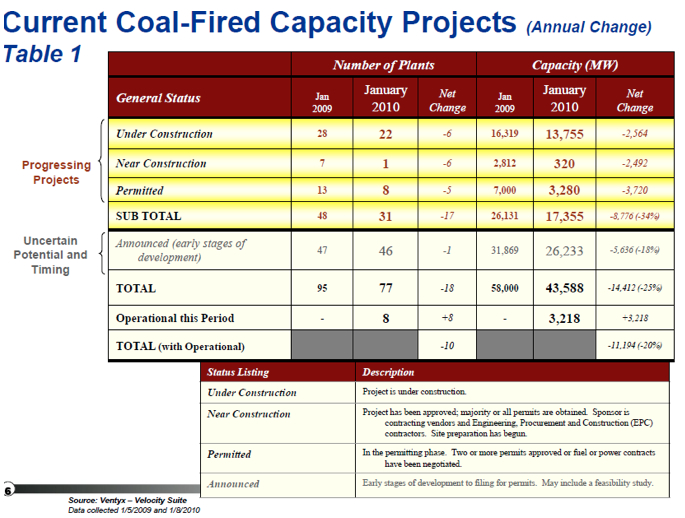 In Kansas, in 2008 and 2009, then-governor Kathleen Sebelius vetoed bills by the state legislature that would have allowed Sunflower Electric Power to build two 700-megawatt coal-fired power plants that had been originally rejected by a state environmental official because of its output of carbon dioxide emissions. Once Kansas Governor Sebelius became a cabinet secretary in the Obama Administration, the atmosphere turned more favorable. The new Kansas governor, Mark Parkinson, is allowing one new coal-fired plant to be built.[x]

In Georgia, a state where coal is the primary fuel for electric generation, Longleaf, the first coal-fired power plant to be built in more than 20 years, is tied up in litigation. In late June 2008, Fulton County Superior Court Judge Thelma Wyatt Cummings Moore overturned the decision by state regulators to issue the plant an air permit, saying state environmental officials failed to take the plant’s carbon dioxide emissions into consideration. In her decision, Moore said the plant would annually emit large amounts of air pollutants, including nine million tons of carbon dioxide (even though carbon dioxide was not defined as a regulated pollutant at the time). In November 2008, the plant owners appealed the decision to the State Court of Appeals. In July 2009, the Court of Appeals overturned the decision, but left the plant’s permit invalid. In September 2009, the Georgia Supreme Court ruled that they would not hear an appeal by the Sierra Club against the previous ruling. While the Sierra Club appealed to the court to reconsider, the Georgia Supreme Court held to their prior ruling. In April 2010, the state Environmental Protection Division issued two amendments to the permit, but failed to allow enough time for public comment. The plant is on hold while the state determines when they will provide the documents for comment.[xi]

In New Mexico, the Desert Rock coal-fired power plant, whose permit was originally approved by the Environmental Protection Agency (EPA) under the Bush Administration. The permit, however, was withdrawn by the same EPA during the Obama Administration, citing inadequate analysis of environmental issues and a failure to use the appropriate technology, coal gasification combined cycle. The plant was to use supercritical coal technology and meet standards defined by the International Energy Agency for carbon capture and storage, allowing it to be retrofitted for future deployment of the coal-gasification technology when it becomes commercially available. The 1,500 megawatt plant was to serve parts of Arizona, New Mexico, and Utah, using Navajo Nation coal resources. According to the President of the Navajo Nation, the EPA is holding it accountable to higher standards than other parts of the United States. In April 2010, the power plant owner indicated that the project was not dead, but it is no longer clear what fuel the owner will use—fossil or renewable.[xii] 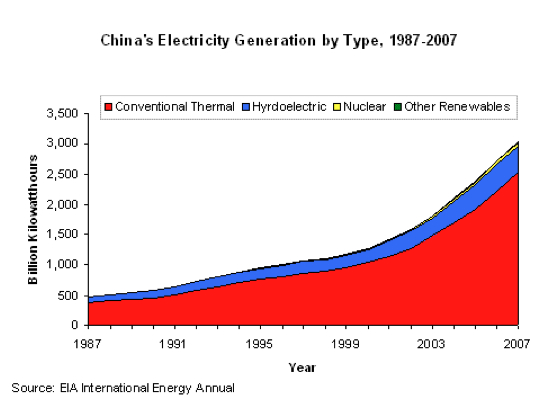 The International Energy Agency (IEA) is also in agreement that China will be building a massive number of coal plants in the future. Their forecast has an additional 773,000 megawatts of coal-fired capacity being constructed by 2030 from 2007 levels, surpassing the total generating capacity in the United States in 2030. They also expect China’s electricity sector to be mainly coal fired, with coal producing 75 percent of the country’s electricity in 2030.[xv]

The chart below shows the dramatic difference between the Chinese and American build-rates for coal-fired generating capacity. The blue and green bars show China’s new coal-fired capacity, built, under construction, and planned, and they are compared to the red and yellow bars for the U.S.’s coal fired capacity that are operational and under construction. The announced U.S. plants have been so tentative in the past that they are not included on the chart. 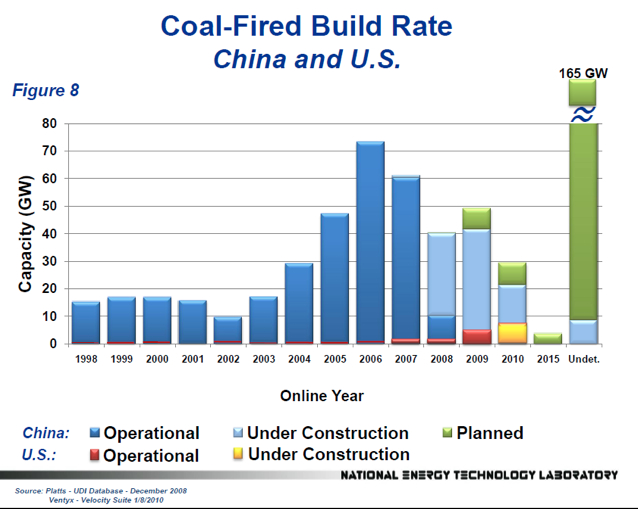 While the current outlook is somewhat brighter for coal-fired power plants here in the United States, their ability to compete with natural gas and renewable technologies is hampered by uncertainty over legislation and regulation, along with legal delays. Congress has had various proposals for a cap and trade bill to limit greenhouse gas emissions, but to date only the House of Representatives has passed their version of the bill. In the mean time, the EPA is planning to limit those emissions through regulation. Coal’s fate in this country is still uncertain, but China realizes that coal is its answer to economic growth, providing the energy it needs to improve the living conditions of its population.

Send a Message to the Obama Administration's Oil Spill Commission