“Under my goal of a cap-and-trade system, electricity rates will necessarily skyrocket.” President Barak Obama

“Coal is my worst nightmare.” Secretary of Energy Steven Chu

“Number one, electric rates are going to go up. Number two, whether or not construction jobs in the green industry are created, I think there’s virtually no manufacturing jobs that are likely to be created from the replacement of coal. Three … transmission grid stability is likely to emerge as a major issue, both because of the shutdowns and because of the intermittency of renewables.” James Wood, Deputy Assistant Secretary for the U.S. Department of Energy

James Wood, Deputy Assistant Secretary for Clean Coal, U.S. Department of Energy, is not very optimistic regarding the outlook for coal generation and future electric rates. That is because new regulations from the Environmental Protection Agency will shut down 35 to 70 gigawatts of coal-fired power generation. The intent is to replace the coal plants with renewable generation. However, replacing coal fired-generation intended to run continuously, with wind or solar power that are intermittent, will cause electric grid-related problems and other issues. And because the new renewable plants are much more expensive than the existing coal-fired plants that they will be replacing, electric rates will go up. This administration has been advocating higher energy prices from its onset, even beginning with President Obama’s speeches on the campaign trail. And now, they are trying to implement those promises.

The Clean Air Act Amendments, established decades ago, provided a market means for power plants to meet environmental standards for sulfur dioxide, nitrogen oxide and other criteria pollutants. The legislation proved effective in that the targets set were easily met by adding control equipment to power plants most conducive to modification. A number of old coal plants, however, did not get modified due to the cost. Since the electric utility companies met the targets set by EPA, they were in compliance and air quality greatly improved. (See chart below.) Now, those coal plants that are generating electricity at production cost levels since their capital has already been paid are to be scrapped for high-cost generation from renewable technologies, funded by taxpayers and ratepayers, who will have to pay for subsidies provided by federal and state governments and the cost of constructing the renewable plants through the electricity used. 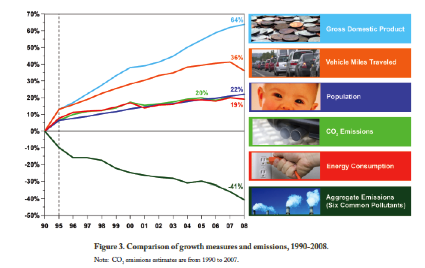 Issues with Closure of the Coal Plants

Speaking at the Eastern Coal Council’s annual conference, Mr. Wood identified a number of additional issues. First, some coal-fired units could be shut down because it is not possible to find the materials and skilled labor to complete the required upgrades by the tight deadlines set by EPA. Second, the burden of the increased costs would be borne primarily by “the not so wealthy.”  Third, there are issues related to  local economies and lost manufacturing jobs.  For instance, a shutdown occurring in local communities where the power plant is the major employer and businesses rely on the relatively inexpensive power would have a major effect on the town’s economy. In contrast, renewable power plants only require a few operators to run the plant.

Mr. Wood also pointed out that a recently announced closure of a coal plant in Salem, Massachusetts is expected to cause problems with the New England power grid.  The organization that oversees the power grid in New England indicated that the coal plant closure would threaten the reliability of the New England, northeastern Massachusetts and Boston power grid. And there are also tax implications. The mayor of Salem announced that the coal plant was the town’s largest taxpayer. Obviously, someone else would have to pay the lost taxes.

Also at issue with the coal plant closures is what technology will provide the needed base-load replacement power. Even without these coal plant closures, base-load power is needed to partially meet the increase in future electricity demand. The Energy Information Administration (EIA), in its Annual Energy Outlook 2011, is predicting over a 20 percent increase in electricity demand by 2035. Solar and wind are intermittent technologies and cannot be counted on to generate electricity when it is needed most, and certainly not to replace base-load power. Thus, if coal and nuclear are not replacement power sources due to environmental and waste disposal issues, natural gas combined cycle plants would be required to fill the void. While natural gas prices are currently low due to the boom from shale gas production, if natural gas becomes the base-load generation fuel of choice, natural gas prices could skyrocket. That was the prediction from conference speaker Megan Parsons of the engineering firm Burns & McDonnell. In its Annual Energy Outlook 2011, the EIA is predicting that natural gas prices to electric utility plants  will increase by over 40 percent by 2035. But that forecast includes only 8 gigawatts of coal plant retirements. Not the large amount expected from the new EPA regulations.

The Obama administration’s energy and environmental policies will clearly result in higher energy prices, if implemented, and as it has already announced. At issue is whether the policies are needed and what benefit is achieved from them. At a time when Americans are still feeling the crunch of a recovering economy and high gas prices, should the government be trying to increase other energy prices even more?

Environmental Advocate Nominated to be Next Commerce Secretary