In the past few days there has been a common theme within the energy conversation: China’s carbon dioxide emissions are skyrocketing 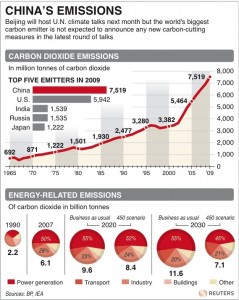 Last week, Reuters published, “Soaring Chinese Economy at Odds with Climate Goals” and today CBS News ran this article, “U.N. Climate Head: World Must Find Common Ground”—the thrust of both pieces is simple: China needs to get with the program.

Right now, China emits a quarter of the world’s Co2 and emissions have doubled since 2000. Not surprisingly, China’s energy consumption has also doubled and this past year surpassed the United States as the world’s largest energy consumer.

These numbers help explain the undeniable link between energy consumption and prosperity. Since 2000, China’sGDP has quadrupled and as a result, China has a developing middle class.

This relationship between energy and prosperity has given rise to the following tension for policy makers: do we help the China’s worst off by encouraging growth or do we promote carbon dioxide emission reduction at any cost?

Reuters summed this tension by saying:

“Policy makers recognize it is difficult to say what is a “fair” emissions target for China, which is rapidly pulling its huge population out of poverty.”

Do we help bring people out of poverty through affordable and reliable energy or do we help institutionalize poverty with global regulations?

China (and India) will continue to oppose carbon dioxide emission caps that reduce the quality of life of their citizens. This is the same reason U.S. citizens reject cap-and-trade—because it is a tax on energy and energy is the capacity to do work. If Congress is serious about bringing down unemployment, they will give Americans access to affordable and reliable energy.