The Gulf Coast oil spill of April 20, 2010 caused the Obama administration to take some drastic measures, in order to prove to the nation that it was handling the emergency better than the Bush administration handled 2005’s Hurricane Katrina. Those drastic measures include a 6-month moratorium on offshore drilling (set to end November 30, 2010), a panel of “experts” to determine the cause of the spill, and new rules from the Department of Interior to minimize the harm of a future oil spill. But how are other countries responding to the U.S. disaster? Offshore drilling continues in Europe, with no changes thus far to the rules. China is investing in all sorts of oil ventures that include drilling offshore from numerous countries; it is even negotiating with Cuba for drilling rights near the Florida coast. Mexico continues to drill offshore with our support. And the United States is lending Brazil $2 billion to explore off its coast, where experts believe 30 billion barrels of oil awaits discovery and production.

Germany proposed a ban on deep-sea offshore oil drilling at a meeting of the OSPAR commission, a group through which the European Union and 15 countries that have coastlines off Europe cooperate to protect the environment of the North-East Atlantic. But Norway, Denmark, and Britain—the region’s oil-producing countries—quickly nixed the proposal, postponing the issue to January, when President Obama is expected to report on the findings of the Deepwater Horizon oil rig investigation.[i]

Whatever the United States does, the outlook for offshore drilling remains excellent, inasmuch as the industrialized world, especially China, will need more oil as the global economy improves. In 2009, China consumed about 5 million barrels of oil per day—more oil than it produced—and it is looking to find supplies elsewhere.[ii] China has spent nearly $200 billion on oil deals during the past few years, joining with more than 19 countries—including Russia, Turkmenistan, Kuwait, Yemen, Libya, Angola, Venezuela, and Brazil—and paying for exploration, production, and infrastructure construction, as well as extending “loans for energy.”[iii] Recently, China’s Sinopec International Petroleum Exploration and Production Company agreed to buy, for $4.65 billion, the 9 percent interest that ConocoPhillips holds in Syncrude,[iv] a Canadian business involved in the production of oil sands (an asphalt-like heavy oil).[v] Canada is currently the number one supplier of crude oil imports to the United States, but U.S. proposals to limit carbon in transportation fuels could make Canada seek markets elsewhere, as this deal with China demonstrates.[vi]

Cuba’s current production of about 60,000 barrels per day is from onshore wells. But Cuba is planning to drill seven test wells in the Gulf of Mexico during 2011 and 2012. A consortium of companies from Spain, Norway, and India is planning to drill at least one well early next year using a Chinese-built rig owned by a unit of the Italian oil company Eni, and Malaysia’s Petronas is planning to use the same rig off Cuba. Cuba has leased 21 of the 59 blocks it owns in the Gulf of Mexico to seven companies. Besides the five foreign companies mentioned above, Venezuela’s state oil company (PDVSA) is also planning to drill an exploratory well next year, and companies from Vietnam and Brazil have also leased blocks. Companies from Russia, China, and Angola are negotiating exploration rights. Cubapetroeo, Cuba’s oil company, estimates that Cuba has up to 20 billion barrels of oil in its offshore areas, although the U.S. Geological Survey estimates the amount to be only 4.6 billion barrels. Of special interest to the United States is that some of this drilling will be within 40 miles of the coast of Key West, Florida.[viii]

Recent estimates have Brazil’s total estimated barrels of oil equivalent at greater than 30 billion.[ix] Probably the largest oil find in more than 20 years is the Tupi offshore oil field, off the coast of Rio de Janeiro. Tupi is in ultra-deep water, below a 2,000 meter-thick layer of salt, which only the most advanced–and expensive–drilling rigs can penetrate.[x] The field contains at least 5 to 8 billion barrels of recoverable oil.[xi] In March 2009, Brazil’s Energy Minister said the country would need $270 billion over 10 years to develop its deepwater reserves.[xii] Petrobas, the semi-private Brazilian company that controls most of the rights to drilling at Tupi, just raised $70 billion dollars in the world’s largest share offer to help finance its expansion plans and to help pay down its debt. Last year, it borrowed a record $30 billion, including debt issues, bank loans, and an oil-for-loan deal with the China Development Bank.[xiii] 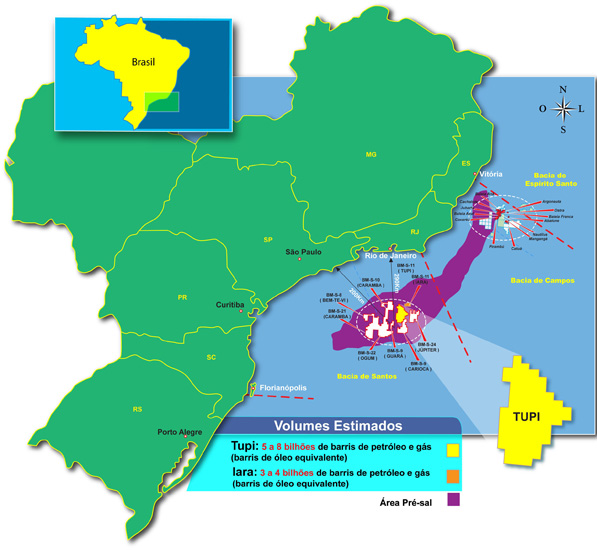 The China Development Bank agreed to lend $10 billion to Petrobas in exchange for increased oil exports. Petrobas and Sinopec (the China Petroleum & Chemical Company) signed a long-term agreement for Petrobas to export 200,000 barrels of oil per day to China between 2010 and 2019. The Export-Import Bank of the United States, a federal bank of the U.S. government, whose mission is to “assist in the financing of U.S. goods and services to international markets,” issued a $2 billion loan to Petrobas for offshore exploration and development—with the approval of Ex-Im’s bipartisan board. The majority of the Export-Import Bank’s financing comes from loans from commercial lenders.[xiv]

Last year, the Export-Import Bank of the United States provided Pemex, Mexico’s state-run oil company, with about $1 billion in direct loans for development of new projects of Pemex Exploration and Production and the Cantarell offshore oil fields located in the Bay of Campeche, about 100 kilometers off the Yucatan Peninsula in the Gulf of Mexico. Pemex is the largest borrower of the Export-Import Bank of the United States, having borrowed $8.3 billion between 1998 and April 2009 for oil and gas exploration, development, and processing projects.[xv] In 2009, Mexico was the second largest supplier of oil imports to the United States, behind only Canada.[xvi]

Countries with offshore oil resources do not intend to follow the lead of the United States in imposing a moratorium on offshore drilling nor are they slowing progress towards exploration and development of offshore oil resources in the Gulf of Mexico and elsewhere. The United States is awaiting results from its panel of “experts” and new rules from its Bureau of Ocean Energy Management, Regulation and Enforcement in the Department of Interior, issued today, to see what hoops the oil industry will need to jump through in order to resume drilling. The new rules include provisions on workplace and drilling safety, with no date for the termination of the moratorium. According to Ken Salazar, Secretary of the Department of the Interior, “Under these new rules, operators will need to comply with tougher requirements for everything from well design and cementing practices to blowout preventers and employee training.”[xvii] The newly appointed Director of the Interior’s regulatory agency, Michael Bromwich, doesn’t think much drilling will be evident even a month after the moratorium is lifted. Although the moratorium does not affect shallow-water drilling, permitting of those projects has been slowed by the Department of Interior because of new safety requirements and approvals by the federal government, which is probably also the Interior’s agenda for deep water projects.[xviii]

Obama Administration Keeps Offshore Moratorium in Place, Says Little About When Thousands will Get Back to Work in the Gulf, Alaska