Alabama has lower energy prices than the national average. Its gasoline price is the 12th lowest among the states and 5 percent below the national average. The state’s lower gasoline prices are due in large measure to the state’s numerous oil refineries and its proximity to the major oil producing and refining operations in the Gulf of Mexico. Its electricity prices are over 7 percent lower than the nation’s average electricity price due to its generation from coal, natural gas, and nuclear power sources. The state has considerable conventional and unconventional natural gas reserves, substantial deposits of coal, and numerous rivers capable of hydroelectric generation. Its oil production increased over 35 percent in just the last 2 years.

The Conasauga shale play in northern Alabama could provide a new source of natural gas production. The Conasauga runs in a 20 mile strip for 100 miles through Tennessee, Alabama, and Georgia. It is estimated to contain 625 trillion cubic feet of natural gas in Alabama 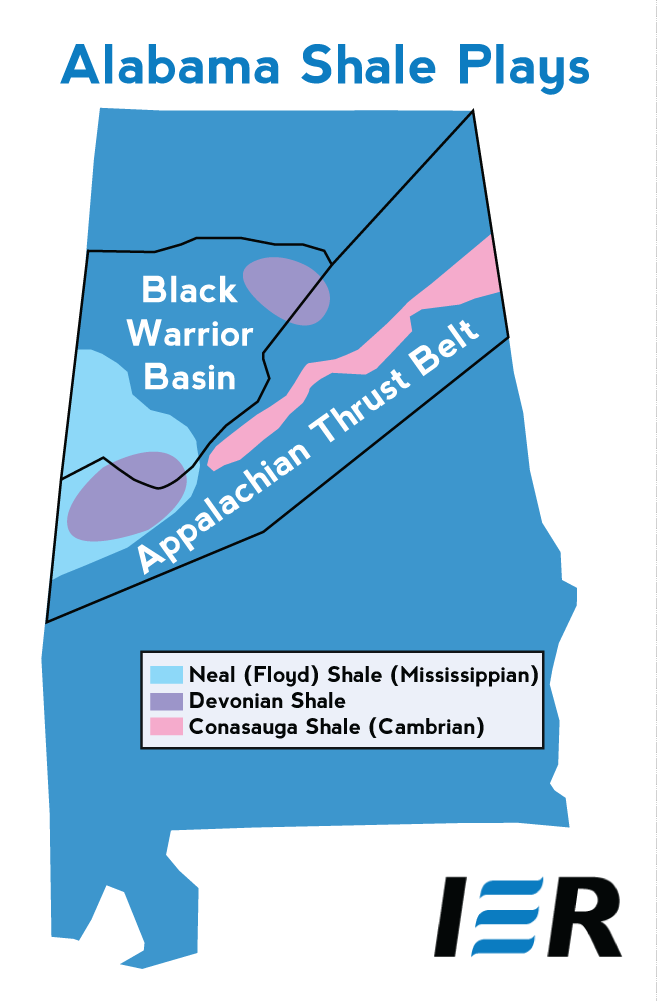 Alabama’s natural gas production currently does not satisfy its state’s demand, which comes mostly from industrial users and electric power generators. Consequently, Alabama purchases additional supplies of natural gas that is transported by pipeline from the Gulf of Mexico, Louisiana, and Texas. The Southeast Supply Header pipeline with a capacity of 1 billion cubic feet per day transports natural gas from the Perryville Hub in Texas to southern Alabama. The pipeline gives Alabama consumers an alternative to offshore supply, which may be vulnerable to weather-related disruptions. In 2011, Alabama reached an historic number of wells producing natural gas, ranking 15th among the states.

Alabama produces crude oil from reserves located in the Black Warrior Basin in the north and the Gulf Coast in the south. Although Alabama’s oil production had been in decline since the early 1990s, new onshore drilling activity has occurred in recent years. To increase production from aging fields, producers have repaired old wells and applied new technology. Alabama produced 9,595 thousand barrels in 2012, 35 percent higher than in 2010, giving it a rank of 15 among the states in oil production.

Alabama has 3 petroleum refineries. One petroleum refinery is located near the Port of Mobile, a second is located in Tuscaloosa on the Black Warrior River, and a third is located in Atmore in the southern part of the State. Petroleum products made at Alabama’s refineries are delivered to local and regional markets and shipped via pipeline to states in the Northeast. Alabama markets receive additional finished petroleum products from Texas and Louisiana through the Colonial and Plantation pipelines. 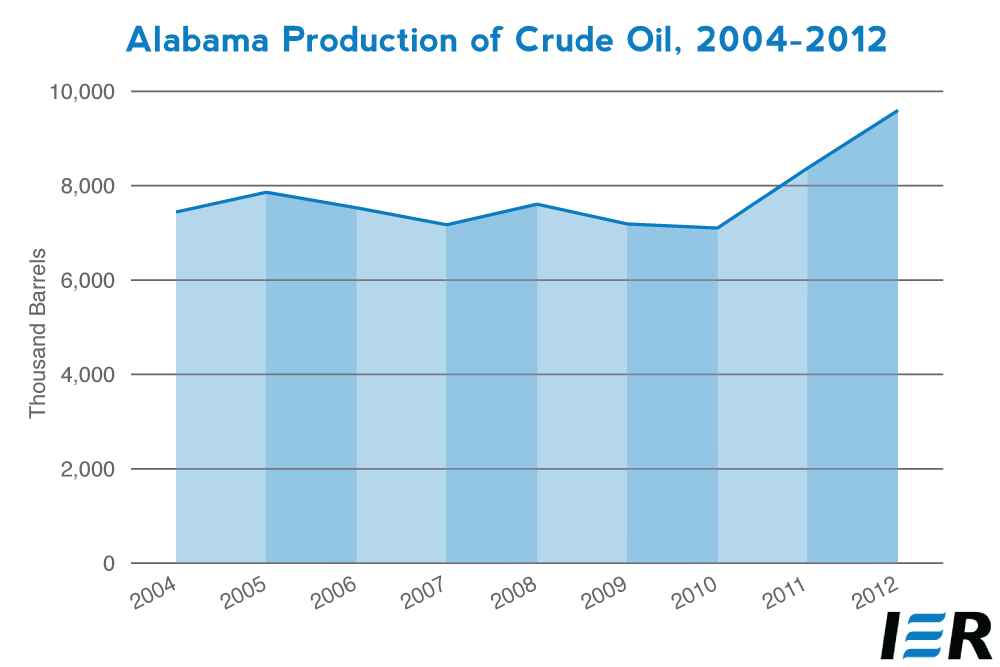 Alabama ranks among the top 10 states in electricity generation. Coal and natural gas are the dominant fuels for electric power generation, accounting for about two-thirds of the electricity produced within the State.

Alabama produces large amounts of coal in the northern part of the state. Additional coal, largely used for electricity generation, is shipped in from other states, primarily Wyoming, Kentucky, and West Virginia. In 2011, Mobile was the fourth largest seaport for exporting  coal in the United States with coking coal used in the steelmaking process accounting for more than 90 percent of the total exports.

Alabama is a major nuclear power generator; its two nuclear power plants produce over one-fourth of the electricity generated in the State. The three reactors at the Browns Ferry nuclear power plant in Limestone County have a combined generating capacity of 3,310 megawatts, second only to Arizona’s Palo Verde plant. The state’s nuclear power capacity expanded in mid-2007 when the Tennessee Valley Authority (TVA) restarted a nuclear reactor at its Browns Ferry plant that had been idle since 1985.

Alabama ranks among the top states in the generation of electricity from wood, wood waste, landfill gas, and other biomass, ranking fifth in the United States in 2011. Virtually all of that electricity was generated by nonutility power producers. The State also contains one of the world’s largest solid biofuel plants, designed to produce 520,000 metric tons of wood pellets each year, the majority of which is shipped to Europe. Several regions of Alabama are well suited for growing switchgrass, making the state a potential site for the installation of bioenergy plants. 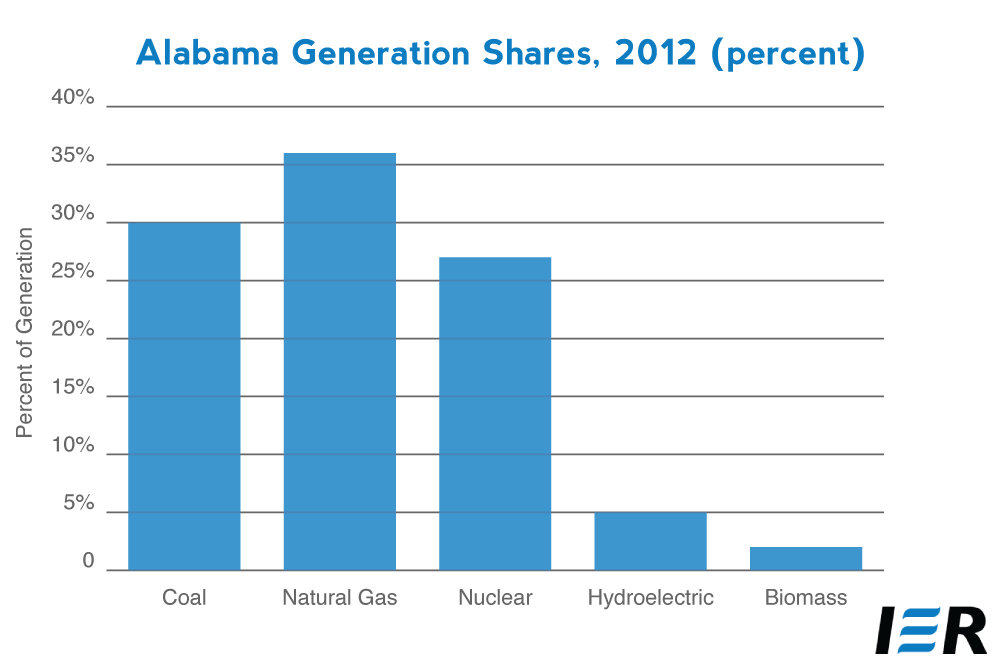 Fortunately for the citizens of Alabama, the state has not imposed many of the regulations that other states have imposed that usually increase the price of energy. Alabama requires new state government buildings to meet buildings code and all new or replacement equipment purchased by state agencies to be Energy Star certified, when cost effective. The state does not, however, mandate the use of renewable energy in electric generation or blended into gasoline, as many states do.

State departments and agencies are also encouraged to employ the latest energy-conservation practices in the design, construction, renovation, operation and maintenance of state facilities. All state agencies must implement the U.S. Environmental Protection Agency’s Energy Star Portfolio Manager data base tool to measure and report energy efficiency and compile quarterly reports required from the Alabama Department of Economic and Community Affairs (ADECA) Energy Division to the U.S. Department of Energy.

The state’s alternative transportation fuels program encourages and promotes the use of alternative transportation fuels to increase the overall efficiency of the transportation system, improve air quality and promote energy independence. The Energy Division encourages the use of biodiesel in Alabama school buses and public fleet vehicles through the Alabama Biodiesel Incentive Program. This grant program provides up to $2,500 to Alabama public K-12 school systems, colleges, universities and local governments to cover the cost of cleaning existing diesel fuel storage tanks in preparation for storing biodiesel.

IER Study Could Point Way for Policymakers in Transportation Bill