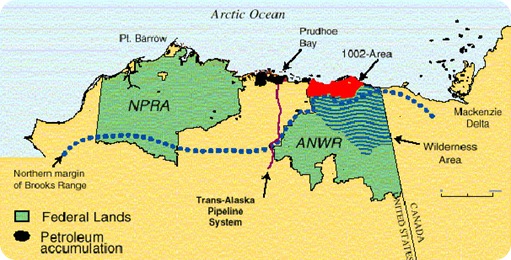 Formerly known as the Naval Petroleum Reserve No. 4, the vast 23-million acre area on Alaska’s North Slope has a history of nearly 100 years of petroleum exploration. In 1923, mindful of the land’s conceivable petroleum value, President Harding set aside these 23 million acres as an emergency oil supply for the U.S. Navy. In 1976, in accordance with the Naval Petroleum Reserve Production Act, the administration of the reserve was transferred to the Department of the Interior, more specifically the Bureau of Land Management, and was renamed to what is now known as the National Petroleum Reserve-Alaska (NPR-A).  The BLM has held four lease sales in the NPR-A (Northeast – 1999 and 2002 and Northwest – 2004 and 2006) and currently administers more than 300 Federal oil and gas leases.  NPR-A is estimated to contain 10.6 billion barrels of oil.

In between NPR-A and ANWR lies Prudhoe Bay.  Oil was discovered in Prudhoe Bay in 1967, and production began in 1977 when the Trans-Alaskan Pipeline (TAPS) was completed.  Since that time, the United States has sent more than 15 billion barrels of oil down TAPS to consumers in the lower 48 states.  Production continues today, even though Prudhoe Bay was originally estimated to contain only 9 billion barrels of oil.  Unlike NPR-A and ANWR, Prudhoe Bay energy production occurs on state, not federal, lands.

Section 1002 of the law that established the Arctic National Wildlife Refuge (ANWR) set aside 1.5-million acres of the northern coastal plain for future production of its enormous petroleum resources.  This 1.5 million acres is known as the 1002 Area after that section of the law, and is estimated to contain 10.4 billion barrels of oil.  However, unlike NPR-A, Congress must vote to approve energy production in ANWR’s 1002 Area.  It has not yet done so.

Q: Would it be faster and/or more environmentally sound to drill in NPR-A instead of ANWR’s 1002 Area?

A: No.  While both NPR-A and ANWR’s 1002 Area were set aside specifically for their oil and gas resources, NPR-A oil is spread out over its entire 23 million acre expanse.  The 10.4 billion barrels in ANWR’s 1002 area, on the other hand, is concentrated in one relatively small area and, as such, can be produced with far less surface disturbance.  Also, 21st century technologies enable companies to produce energy safely, as they have been doing in Prudhoe Bay for more than three decades.

Q: Why isn’t oil being produced in the NPR-A today?

A: Lawsuits filed by environmental organizations such as Earthjustice, the Sierra Club, and the Natural Resources Defense Council have stalled production in NPR-A.  In addition, a U.S. Corp of Engineers permit has not yet been granted to install a critical pipeline.

Q: Which would require greater investments in surface roads, pipelines, and drill-pads?

A: NPR-A would require a much greater investment in surface infrastructure.

How Credible is Stern’s Testimony About the Costs of Global Warming?

Pitfalls in the Pickens Plan