When the Boxer-Lieberman-Warner global warming bill was debated on the floor of the Senate June 2nd to June 6th, one thing became clear—the costs of cap and trade style greenhouse gas regulation were enormous. Almost all serious economic analyses agree on this central point.

Despite their defeat in the Senate, the supporters of dramatic cuts in greenhouse gases remain undaunted. In an effort to portray the enormous costs of their plans in a better light, Sir Nicholas Stern was invited to testify before the House Energy and Commerce Committee on June 26th. Stern was the lead author of an official British government report on the costs of global warming–The Stern Review on Climate Change. Compared to the economic literature on global warming this report is an outlier because Stern argues it is economical to spend massive amounts of money on greenhouse gas reduction measures in the near-term.

Because 1 or 2 percent of global GDP is not a trivial amount of money, the question is how credible are Stern’s assumptions? The short answer is, not very.

When weighing the tradeoff between the present economic costs of CO2 regulation, versus the potential future damages from climate change, policy makers must know how to compare a dollar in 2008 with a dollar in, say, 2088. If market interest rates are used—just as a businessperson would do—then the “present value” of future climate damages is low, and the corresponding “optimal” carbon tax is low. But Stern dismisses the market discount rate as unethical, and instead adopts an artificially low discount rate based on his moral views. This artificially inflates the present value of future climate damages and hence inflates Stern’s recommended carbon tax.

Stern’s use of a “moral” discount rate instead of a market discount rate has resulted in a barrage of harsh criticism from a number of very well-respected economists. Ian Murray of the Competitive Enterprise Institute provides a synopsis of a couple of the most prominent critiques: 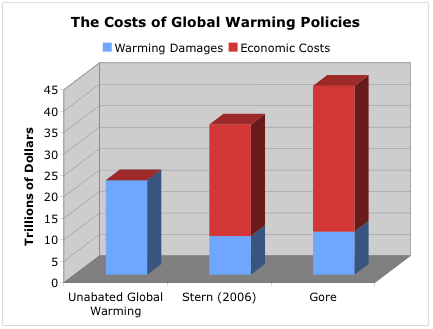 • Dr. Richard Tol of Hamburg University, the leading expert on the social cost of greenhouse gases, estimates [ ] the cost of carbon dioxide emissions at around $2/ton[1], not the $86/ton used by Stern. Even at a higher estimate of $12/ton, this translates to just 12 cents on a gallon of gasoline.

• Dr. William Nordhaus of Yale estimates that 3°C of global warming would cost the world $22 trillion this century [in climate change damages]. Stern’s recommendations, based on immediate deep reductions in emissions on the basis of intergenerational equity, would reduce [those damages] to $9 trillion, but at a cost [to the economy] of $26 trillion. Al Gore’s package of measures, which calls on the U.S. to “join an international treaty within the next two years that cuts global warming pollution by 90 percent in developed countries and by more than half worldwide in time for the next generation to inherit a healthy Earth,” would reduce warming costs to $10 trillion, at a[n economic] cost of $34 trillion[2].

Sir Nicholas would like us to spend $26 trillion in order to avert $13 trillion in damages. This is silly. The world would be better off if we stayed with the status quo and dealt with the damages caused by unabated global warming than follow Stern’s recommendations.

The Energy Scorecard of the OPEC Congress