Environmentalists have been actively pursuing banning the use of hydraulic fracturing in order to keep oil and natural gas in the ground rather than fueling our vehicles, heating our homes, keeping the lights on, as well as the air conditioners humming. In the 2016 election, Monterey, California approved a measure to ban the use of hydraulic fracturing, which was on its ballot.[i] But, if its use is banned nationally, the impact would be major. The U.S. Chamber of Commerce found that by 2022 the ban would cost the country 14.8 million jobs, almost double gasoline and electricity prices, and increase the cost of living by almost $4,000.[ii] 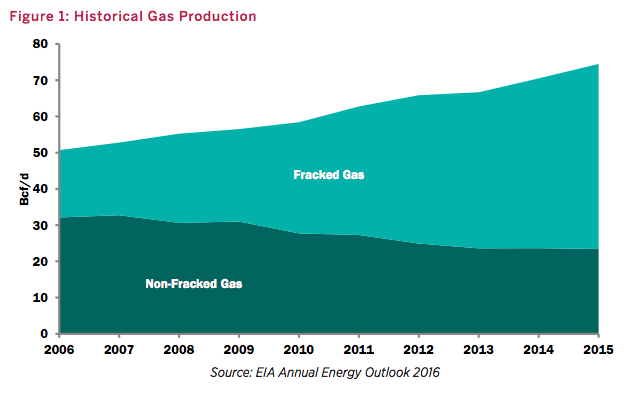 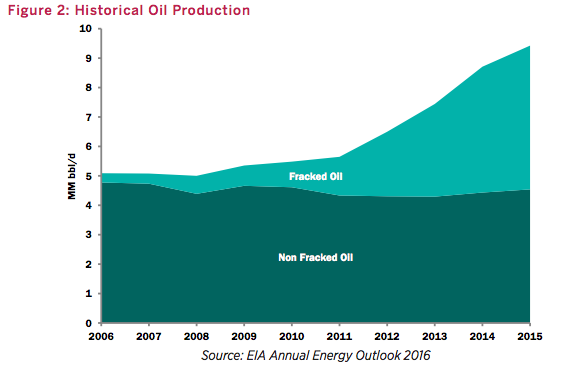 The Chamber of Commerce Report

The Chamber of Commerce analyzed what would happen if hydraulic fracturing was banned nationally between the start of 2017 through the end of 2022. It examined the impact on jobs, energy prices, incomes, domestic manufacturing, and energy security. It found that:

To get these results, the Chamber started with the High Oil and Gas Resource and Technology Case from the Energy Information Administration’s (EIA’s) Annual Energy Outlook 2016, which it believes more realistically represents oil and gas production in the past. To that, the Chamber assumed a ban on hydraulic fracturing beginning in 2017 and applied decline rates for hydraulically fractured wells based on the Eagle Ford and Haynesville basins. The Chamber also assumed that imports and exports could return to previous historic levels.

Oil and natural gas prices in this situation would be based on scarcity as supply would be significantly reduced and demand would be fairly inelastic in the short-term. By 2020, Henry Hub natural gas prices rise to levels experienced before 2008 and then increase further to over $12 per million Btu in 2020. EIA’s Annual Energy Outlook reference case has Henry Hub prices remaining at $5 per million Btu or less through 2040 due largely to the use of hydraulic fracturing. (See chart below.) 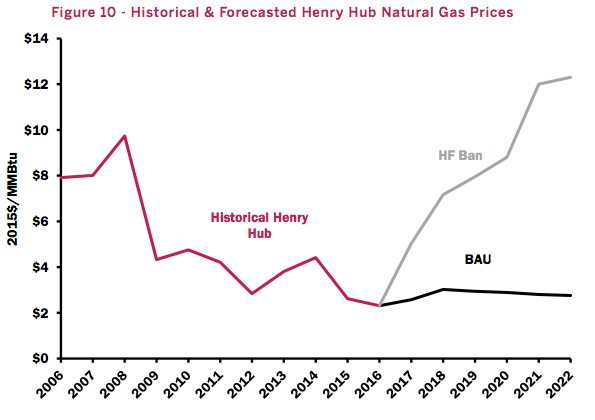 The global crude oil market has been in an oversupply situation since 2014 when U.S. shale oil production became the marginal oil supplier globally. The Chamber expects the total affected U.S. oil production to be 1.75 million barrels per day in 2017, which would result in a tight global oil market. The Chamber expects oil prices to return to their 2010 to 2014 levels and then increase to $120 per barrel after 2020. EIA’s Annual Energy Outlook 2016 reference case prices remain below $100 per barrel through 2030. (See chart below.) 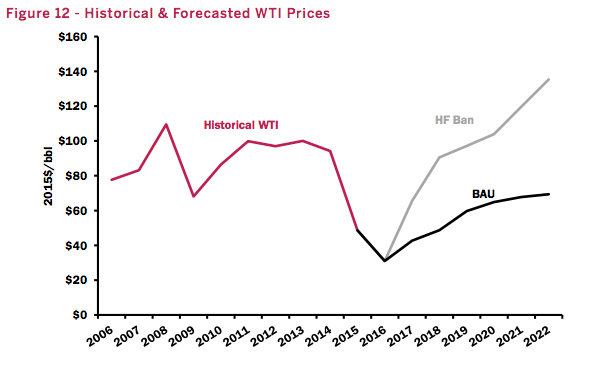 The table below show the impacts of banning hydraulic fracturing on the cost of living in four states—Texas, Pennsylvania, Ohio, and Colorado. Texas is the most impacted since it ranks number one in oil and gas production. Under a ban on hydraulic fracturing, Texas loses 1.49 million jobs, Pennsylvania loses 466,000 jobs, Ohio loses 397,000 jobs and Colorado loses 215,000 jobs. The cost of living for the average family increases almost $3,500 per year in Colorado and Pennsylvania, almost $4,000 per year in Ohio and over $4,600 per year in Texas.

Replacing 52 percent of our oil and almost 70 percent of our natural gas if a ban is placed on hydraulic fracturing would return oil and natural gas prices to levels prior to the energy renaissance experienced since 2008 and then to levels even higher. The United States would become an LNG importer, rather than exporter and tight oil markets would end up the norm again. That would mean that the gains we have made to energy independence would be gone and oil and gas markets would become volatile again. This is not a pretty picture.

[ii] U.S. Chamber of Commerce, What If Hydraulic Fracturing Was Banned?, November 2016, http://www.energyxxi.org/sites/default/themes/bricktheme/pdfs/CoC_BannedFracking_FULL_v3.pdf

ICYMI: Why Federal Fuel Economy Mandates Should Be Relaxed