To demonstrate this with numbers, the U.S. Chamber of Commerce initiated a study to evaluate the impact of European-style energy policies on the United States economy and energy sector. The study found that those policies would result in a $700 billion annual loss to the U.S. economy, almost 8 million fewer jobs, and have Americans pay an extra $4,800 per year on the energy they need to heat their homes, commute to work, run their appliances and enjoy their TV and PCs.[i]

The study looked at 4 major differences between the EU and US energy systems:

For example, the study found that EU’s electricity, natural gas, and motor fuel energy prices over the past several years have ranged between 1.6 to 2.4 times higher than U.S. prices. The following graphic depicts this difference for gasoline prices, which are 2.4 times higher in the European Union than in the United States. 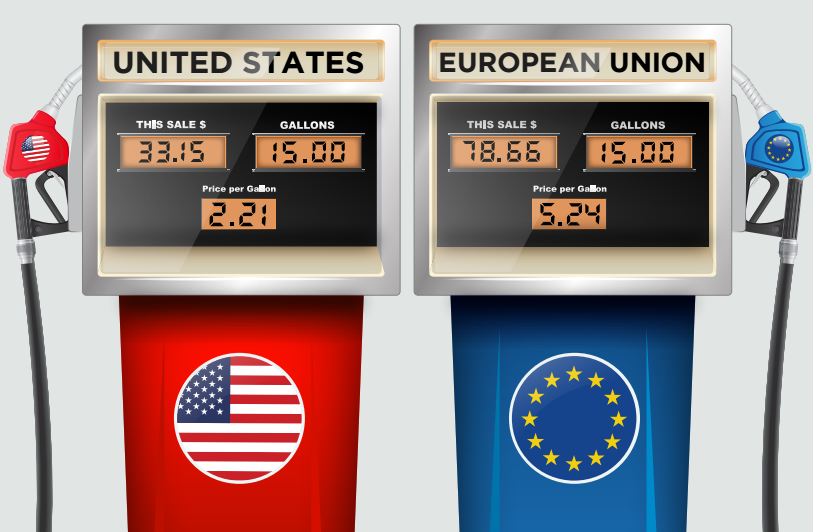 Examples of restricting access to lower-cost energy supplies include Germany’s plan to replace all its nuclear units with renewable energy (wind and solar power), which increases electricity prices. Germany’s residential electricity price is 3 times higher than the U.S. residential electricity price. Also, several EU countries are banning the use of hydraulic fracturing which has resulted in less development of EU oil and gas resources and greater dependence on imports, much of which comes from Russia. EU imported 70 percent of its natural gas in 2014 and 88 percent of its crude oil. That compares to 4 percent and 27 percent, respectively, for imports of those products into the United States.

When it comes to renewable energy, the European Union has outspent the United States by a factor of 2.3. Between 2005 and 2015, the EU spent more than $750 billion in renewable energy, compared to $330 billion for the United States. While some EU countries have garnered a substantial amount of generation from renewable energy, such as Germany, it has not come cheaply. In Germany’s replacement of nuclear power with renewable fuels, the country charged its consumers with a renewable fee, which in 2014 accounted for 21 percent of the average consumer’s bill. Further, wind and solar are intermittent technologies, whose output cannot be controlled by the system operator. As a result, Germany has had to back-up the power with fossil fuels, predominately coal, increasing its greenhouse gas emissions.

In 2005, the European Union instituted the ETS—the world’s largest cap-and-trade market, which requires electric utilities and industry to have allowances that cover their greenhouse gas emissions. Allowances are bought and sold on the open market; the cost of the allowances is added to consumer prices. In 2014, carbon dioxide prices averaged $6.47 per metric ton, which added a 17 percent premium on the average, wholesale cost of electricity in Europe. The carbon tax penalizes carbon-emitting technologies (those fueled by fossil fuels) and thereby provides an additional subsidy to renewable energy.

Further the European Union has the highest overall tax rates on energy, which is based on the EU Energy Taxation Directive of 2003 that sets minimum tax rates for a range of energy commodities. The end result is higher prices for consumers and business. The figure below compares the effective energy and carbon dioxide tax rates in a number of European countries and shows that the rates are about 20 times higher than in the United States. For example, in 2013, EU countries taxed residential electricity rates at an average of 31 percent. (The UK’s tax was only 5 percent, but Denmark’s was 57 percent.) Gasoline taxes in the EU averaged $3.36 per gallon—almost 7 times higher than in the United States and diesel taxes averaged $2.38 per gallon—4 times higher than in the United States. 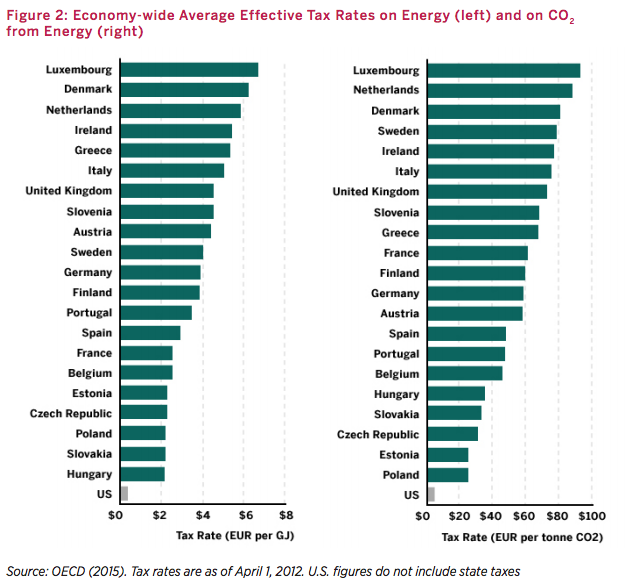 Impact of EU Energy Policies on the United States

Instituting the above policies would result in a $676 billion hit to the residential sector and a $31 billion hit to the industrial sector every year. The average household would spend $4,800 more on energy each year. The increase in residential energy prices would eliminate 7.7 million jobs and the increase in industrial energy prices would result in a loss of 273,000 jobs.

Over the last 8 years, President Obama’s goal has been to move us closer to European policies and prices. The agreement that he made in Paris has the United States committed to reducing between 26 and 28 percent of our carbon dioxide emissions below 2005 levels by 2030. That commitment and the policies to get us there will increase energy prices. As the Chamber of Commerce report shows, higher energy prices will have a negative impact on the economy, lowering GDP, creating fewer jobs, and lowering household income.

[i] U.S. Chamber of Commerce, What If the U.S. was forced to pay EU prices for energy?, October 2016, http://www.energyxxi.org/sites/default/themes/bricktheme/pdfs/EU_Report.pdf

U.S. Nuclear Power Plants are Shuttering. Why? And what's replacing them?

What Would a Ban on Hydraulic Fracturing Mean?