Five U.S. nuclear power plants have shuttered in the past 5 years and more are on the way due primarily to competition from low cost natural gas, onerous regulations from the Nuclear Regulatory Commission (NRC), low prices in the regional market for electric generating capacity and artificially low prices caused by the production tax credit for wind power. Crystal River in Florida, Kewaunee in Wisconsin, and San Onofre in California were retired in 2013. More recently, Vermont Yankee retired in 2014, and Fort Calhoun in Nebraska retired last month. Several other nuclear plants have announced plans to retire: the Clinton plant in central Illinois is expected to retire by June 2017, followed by the Quad Cities plant in northwestern Illinois by June 2018, and both the Oyster Creek plant in eastern New Jersey and the Pilgrim plant in eastern Massachusetts are expected to retire in 2019. Further, Pacific Gas and Electric has announced that the Diablo Canyon plant in California, consisting of two units, will be retired by the time their current operating licenses expire in 2024 and 2025.[i]

A few years ago, it was assumed that most existing U.S. nuclear plants would easily obtain 20- or 30-year license extensions from the NRC, which would carry the bulk of the U.S. nuclear fleet into the 2040s and beyond. However, extremely long and uncertain reviews by the NRC have resulted in early retirements rather than life extensions. Two units at the San Onofre Nuclear plant in California were shuttered because of the NRC not granting life extensions after extensive work had been done on the units. The NRC reviews were taking so long that the plant operators had to close the plants due to the expense of keeping them in operating condition and purchasing power to replace their output.[ii]

Electricity deregulation also caused problems for nuclear plants. Merchant power plants, whose rates cannot be recovered through regulated cost-of-service rates, have found it difficult to compete with low natural gas prices and increasing regulations. The Kewaunee Power Station and the Vermont Yankee plant are both merchant plants. The Vermont Yankee nuclear power plant had supplied 75 percent of Vermont’s power. In retiring Vermont Yankee, Entergy cited a number of financial factors, including: low wholesale electricity prices—driven in part by lower natural gas prices, which have reduced the profitability of the plant— increasing capital costs for maintaining the unit, low prices in the regional market for electric generating capacity, and increased costs to comply with new federal and regional regulations.

Artificially low prices caused by the production tax credit for wind can also play a role in the economics. Wind producers are paid the equivalent of $35 per megawatt-hour (pre-tax income) in production tax credit subsidies, so a wind producer can still profit while paying the grid to take its electricity, producing negative prices. Nuclear plants are designed to run at full output and cannot “ramp” up and down easily. In times of low demand, nuclear plants can be forced to take the negative prices caused by the production tax credit rather than go through the long and expensive process of lowering their output.[iii]

Diablo Canyon’s two nuclear units are being shuttered for different reasons. According to the NRC, these units are well run and are among the best in the country, and according to the utility company, they are able to withstand earthquakes, tsunamis and flooding. But, the utility company is being pressured to shutter them by environmental groups, who believe they are situated in a potential earthquake area and want them replaced with renewable energy and energy efficiency programs.[iv]

Diablo Canyon produces 9 percent of California’s electricity and 20 percent of Pacific Gas and Electric’s power–a lot of power to be replaced by solar and wind units that are not under the control of the system operator. While Pacific Gas and Electric expects its demand to be less when it shutters these units because of California’s law to double energy efficiency by 2030, it is unclear that consumers will demand less, particularly when the population of California is increasing.[v]

While Pacific Gas and Electric originally announced that rates would not increase with the nuclear plant closures, it now admits that the closure would cost $1.77 billion, which would be collected over an 8-year period, and that rates would increase immediately once it receives approval from California’s Public Utilities Commission. Further, Diablo Canyon’s power will be replaced almost entirely by natural gas—not renewable energy. Wind and solar energy have low capacity factors because they can only operate when the wind is blowing and the sun is shining, so natural gas is needed, at a minimum, as back up to the wind and solar power.[vi]

While a number of existing nuclear plants are expected to retire in the near future, few new nuclear plants are expected to come on-line. The last newly built reactor to enter service was Watts Bar 1 in Tennessee, in 1996. In 2007, the Tennessee Valley Authority voted to complete construction of Watts Bar 2. On October 22, 2015, the Nuclear Regulatory Commission approved a forty-year operating license for Unit 2, marking the formal end of construction and allowing for the installation of nuclear fuel and subsequent testing. On December 15, 2015, TVA announced that the reactor was fully loaded with fuel and was ready for criticality and power ascension tests.[viii] Watts Bar 2 began commercial operation on October 19, 2016.[ix]

In February 2012, the NRC approved a license allowing the construction and conditional operation of two new nuclear reactors at the Vogtle nuclear power plant in Georgia, marking the first time the commission green-lighted construction for a new reactor since 1978.[x] Then in March 2012, the NRC approved a second license allowing construction and conditional operation of two new reactors at Scana Corp.’s Virgil C. Summer nuclear power plant in South Carolina.[xi] These 4 nuclear reactors are expected to come on line in 2019 and 2020. [xii] See the chart below for the announced retirements vs. the new nuclear unit openings between 2016 and 2025. 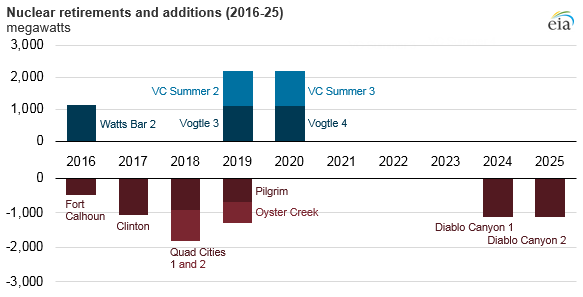 Nuclear plants are being shuttered because of competition due to low cost natural gas, onerous regulations from the NRC, low prices in the regional market for generating capacity, subsidies for wind power and pressure from environmental groups. Regardless of what will be replacing that power, whether it is wind and solar power backed up by natural gas, or some other combination, consumers will be paying for the increased costs that the utility company will incur. There is no free lunch and there is no free electricity despite what environmentalists who are pushing wind and solar power want you to believe. It is economically and environmentally wasteful to retire perfectly good nuclear units because of burdensome regulation or the desire to use wind and solar power instead.