The Institute for Energy Research released a study titled Assessing Wind Power Cost Estimates. The study, written by Dr. Michael Giberson, an economics professor at Texas Tech University, details the costs of wind power that commonly go unreported in studies performed by government-funded groups such as the National Renewable Energy Laboratory (NREL). The study is published as the federal wind Production Tax Credit (PTC), a massive subsidy to the wind power industry, is set to expire at the end of the year. Last year, the PTC received another one-year extension that government analysts project will cost taxpayers $12 billion.

“As Big Wind’s lobbyists fight tooth and nail to extend the wind Production Tax Credit, it is important that we look at the true costs of wind power to taxpayers and ratepayers,” IER President Thomas Pyle said upon release of the study.

“Despite being propped up by government mandates and billion dollar subsidies for decades, wind power continues to be an expensive and boutique energy source that the American people cannot rely on for power when they need it. Although lobbyists for the wind industry prefer to downplay the real costs of wind power, Dr. Giberson has produced a fact-based study that demonstrates just how expensive it really is.”

The study highlights several categories of costs that NREL and others fail to recognize in their studies on the Levelized Cost of Energy (LCOE). Rather than approaching the cost of wind power from the point of view of the wind project developer, Dr. Giberson takes a broader view of the cost of wind power to all Americans, including electricity consumers and taxpayers.

As Giberson states in the study, “While expenses faced by wind project developers are an important element of the overall cost of wind power, the addition of wind power to the power grid involves a number of other costs … Such costs include the expense of transmission expansions needed to develop wind power, other grid integration expenses, and added grid reliability expenses.” 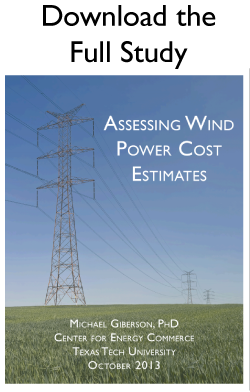 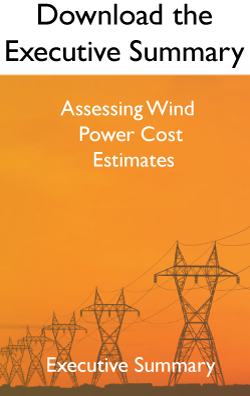