On Monday morning, Russia cut off natural gas supplies to Ukraine. President Putin’s latest move in the ongoing tensions between the two countries came after a deadline passed for Ukraine to pay Russia for gas, diplomatic talks crumbled, and Moscow and Kiev failed to reach an agreement on prices.[1] This event marks the latest gas cutoff in a long history of Russia using energy as a geopolitical weapon.[2]

The showdown over natural gas continued on Tuesday, as a pipeline in central Ukraine exploded. Although the Ukrainian government has officially stated that the cause of the blast is unknown, the explosion did occur the day after Gazprom announced that it would cut off gas to the country.[3]

As Russia continues to flex its energy muscles, Washington should consider doing two things: (1) streamlining its onerous permitting process for natural gas exports, and (2) making serious efforts to understand and export the successful policies and techniques that made the American natural gas and oil boom possible. In short, we can export our gas, our polices, and our expertise.

Escalating Tensions Between Moscow and Kiev

Monday’s events mark Russia’s third natural gas cutoff in less than a decade—Moscow has already cut gas to Kiev in 2006 and again in 2009, and both of those “gas wars” caused supply disruptions in Europe, which receives roughly 15 percent of its gas imports through Ukraine.[4]

While the dispute is centered around price and payment issues, it comes on the heels of ongoing security tensions between Russia and Ukraine and highlights the degree to which Moscow sees gas exports as a weapon. Gazprom, the Russian natural gas giant, announced Monday morning that it ceased gas exports to Ukraine, claiming that Ukraine was guilty of “persistent nonpayment” for gas and that it owes the company roughly $4.5 billion. Russian government leaders have stated that they would only be willing to return to the negotiating table if Kiev settles it unpaid debts. Ukrainian leaders, in the meantime, have retorted that this energy fight is not really about gas, but is instead about a geopolitical struggle that has heightened in tempo since the Russian invasion of Ukraine’s Crimean Peninsula. On Saturday, two days before the cutoff was announced, for example, pro-Russian separatists shot down a Ukrainian military plane and killed 49 people. That event caused protestors to attack the Russian embassy in Kiev, fueling a violent cycle of action and retaliation.[5]

Impact of Gas Disputes on Europe

Europe depends on Russian energy, raising the risk of import shortages. Both the 2006 and 2009 natural gas wars between Moscow and Kiev affected European customers. During the first gas crisis in 2006, countries as far west as France reported that supplies from a pipeline running through Ukraine had dropped by up to 40 percent.[6]

During the 2009 Russian gas cutoff, over a dozen countries fought to cope with energy shortages during the winter—Bulgaria, Croatia, the Czech Republic, Greece, Italy, Macedonia, Romania, Serbia, Slovakia, Slovenia, and Turkey all reported a complete halt in gas imports from Russia, while Austria, France, Germany, Hungary, and Poland reported significant decreases in gas supplies.[7]

Recent Russian gas maneuvers have not been kind to Europe, either. Moscow’s recently-signed gas agreement with Beijing proved to Europe that Russia did not need to depend on E.U. countries for a natural gas market. Gazprom chairman Alexey Miller, in fact, made clear that the Russia-China gas deal was a geopolitical bludgeon against Europe when he stated,

This cutoff could raise the risk of gas shortages in Europe, as well. Ukrainian pipelines are a vital link between Russian gas and the European import market—roughly 15 percent of Europe’s gas supplies run through Ukraine. Although this cutoff may be less disruptive than the 2006 and 2009 cutoffs because it is occurring during the summer rather than the winter, the growing trend of Russian willingness to shut off gas flows does not portend well for Europe. If the current crisis extends through winter, the consequences could be difficult, particularly if Ukraine does not stockpile sufficient natural gas in its storage facilities in advance.[9]

What Washington Can Do

While Ukraine and Europe may suffer from actual and threatened gas shortages, the U.S. has an abundance of natural gas. According to the recently released BP Statistical Review of World Energy 2014, the U.S. had 328.4 trillion cubic feet (tcf) of natural gas proved reserves at the end of 2013, a 7 percent increase from 307.2 tcf in 2012.[10]

The following graph from BP’s 2014 Statistical Review of World Energy illustrates this—despite the fact that the U.S. is the world’s largest natural gas producer, we export very little of that gas[12]: 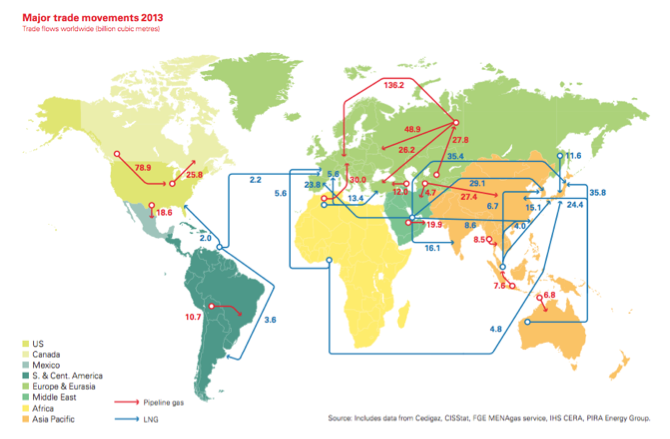 Although the U.S. possesses huge reserves of natural gas and produces more gas than any country in the world, the process for merely obtaining the necessary permits for exporting natural gas is particularly onerous. Companies looking to set up liquefied natural gas (LNG) terminals and to export LNG must go through two separate agencies to receive approval: the Federal Energy Regulatory Commission (FERC) and the Department of Energy (DOE). FERC is responsible for authorizing the construction and siting of LNG import and export facilities and for preparing Environmental Impact Assessments (EISs) for potential projects.[1] The DOE is then responsible for issuing a permit to LNG export projects, without which such projects are banned from proceeding, under the Natural Gas Act of 1938.[2]

The DOE’s track record for approving natural gas export projects leaves much to be desired—currently, twenty-six applications remain under DOE review awaiting authorization.[3] Only one project (by Sabine Pass Liquefaction) to export natural gas to a country with which the U.S. has not signed a FTA has final federal approval from both the DOE and FERC. Six other non-FTA proposed projects have received the DOE’s conditional approval during the past year and a half, but still await final clearance from FERC before they can be built.[4]

The DOE Permit approval is also only the tip of the iceberg—even after a permit is finally approved by both agencies, the DOE reserves the right to retroactively revoke permits for LNG exports. This post-approval revocation authority concerns investors, owners, and potential buyers because it raises the possibility of terminals being unduly shuttered.[5]

Companies hoping to export LNG have lamented the delayed nature of the FERC process. Two projects, Louisiana’s Cameron LNG and Texas’s Freeport LNG hoped to obtain authorization last year, but only received the first draft of their EISs this year—they also face months of consultation with FERC before potential approval. Although the DOE has approved seven projects in the last year and a half, FERC has not caught up.  To put the timeline in perspective, Cameron LNG filed its application to export LNG in December 2011[6], while Freeport LNG filed its application in December 2010.[7]

If the federal government is serious about improving the energy security of the world (and well as domestic natural gas production jobs), then they need to do much more to streamline the LNG terminal approval process.

Recommendation #2: Export the Policies That Have Fostered the Hydraulic Fracturing Revolution on Private and State Lands

Bringing American LNG to market is a small part of the battle. What would make the biggest difference is the U.S. exported the policies that created the hydraulic fracturing revolution on private and state land in the U.S.

There is one place in the world where the hydraulic fracturing revolution has thrived—on private and state lands in the U.S. The hydraulic fracturing revolution has not occurred on federal lands. According to a report by the non-partisan Congressional Research Service, oil production on federal lands fell 6 percent between fiscal years 2009 and 2013 while over the same time period, oil production increased by 61 percent on private and state lands.[8] The reason for the increase on private and state lands is because of the policies and regulations implemented by states like Texas, North Dakota, and Pennsylvania that allow for energy production and environmental protection.  If the federal government would understand these policies, such as property rights, the rule of law, predictable and consistent regulation, that would help spread hydraulic fracturing and increase natural gas and oil development throughout the world.

Europe could be producing much of the natural gas they need. A study by IHS Global, led by energy expert Daniel Yergin, estimated that enough shale gas exists under Germany to increase gas production to over 35 percent of total consumption, a 10 percent increase from current production levels.[9]

The gas revolution doesn’t need to be contained to only private and state lands in the U.S. Expanding the polices that are critical for hydraulic fracturing development would benefit Europe, and the rest of the world, including the United States.

Conclusions: Wielding Our Own Energy Weapon

The U.S. can blunt Russia’s attempts to use energy as a weapon. American gas production has grown significantly because of the shale revolution, and the fruits of that revolution—both in terms of actual natural gas and in terms of policies—can and should be shared with our allies around the world.

[16] Mark Green, Uncertainty and Delay is Not an Energy Strategy, Energy Tomorrow, May 30 2014, http://www.energytomorrow.org/blog/2014/may/may-30-uncertainty-and-delay-is-not-an-energy-strategy

BP Energy Review 2014: Coal Use on the Rise Globally