In the previous blog post, we discussed how President Obama and the Environmental Protection Agency (EPA) are working to mandate reduced coal use in the United States. It turns out that the United States is nearly alone in the world in reducing coal use—the leaders of countries around the world are trying to provide their citizens with more reliable, affordable energy, even as President Obama is trying to do the opposite here. Coal use grew 3 percent in 2013 and was the world’s fastest growing fossil fuel, according to BP in its annual Statistical Review of World Energy. BP just released its Statistical Review of World Energy providing production and consumption data for 2013.[i]

Globally, energy consumption increased 2.3 percent in 2013. This is faster than the 1.8 percent increase in 2012, but below the 10-year average of 2.5 percent. Energy consumption in emerging nations grew by 3.1 percent, below the long-term average, but higher than the wealthy nations of the Organization for Economic Cooperation and Development, where consumption grew by 1.2 percent. Emerging economies accounted for 80 percent of demand growth needed to bring power to their citizens and to fuel their growing economies.  In many of these countries, large numbers of their people are without electricity. For example, China’s energy consumption increased by 4.7 percent in 2013 although that level was below its 10-year average of 8.6 percent. Natural gas, coal, and oil combined to supply 87 percent of global energy demand. 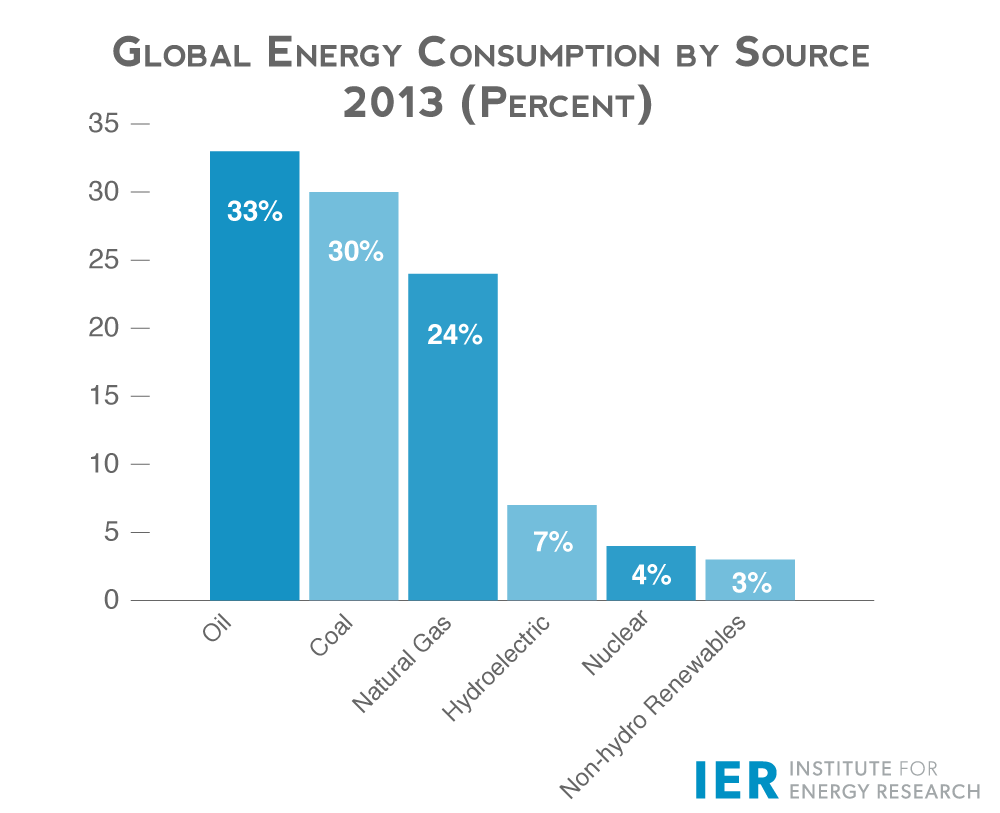 Oil remained the world’s leading fuel, with a 32.9 percent share of global energy consumption. Global oil consumption increased by 1.4 million barrels per day (1.4 percent), which was just above the historical average. But oil production did not grow as fast last year; it grew by just 0.6 percent, or 560,000 barrels a day. The shale boom from hydraulic fracturing in the United States was largely able to offset disruptions to production elsewhere in the world. U.S. oil production increased by 1.1 million barrels per day in 2013—the largest increase in the world. According to Christof Rühl, BP’s chief economist, for the past 3 years, oil-price volatility was at its lowest level since the early 1970s.[ii] China’s net imports of oil totaled 7 million barrels per day in 2013—the largest net imports in the world, surpassing that of the United States. Global proved reserves of oil increased to 1,687.9 billion barrels at the end of 2013, almost enough to equal 50 years of global consumption at current rates. 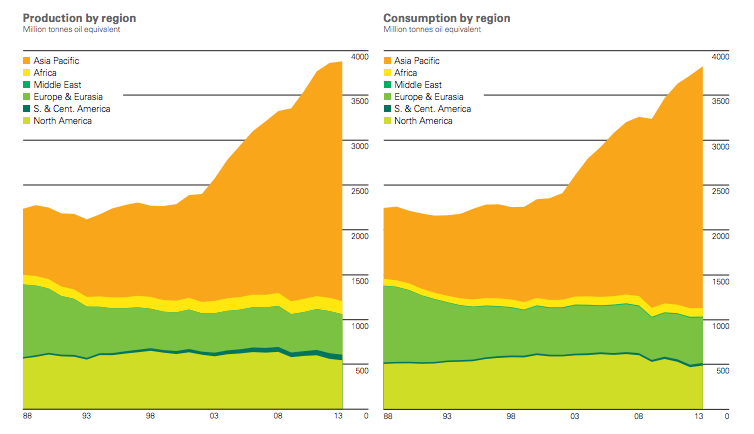 Global nuclear output grew by 0.9 percent, the first increase since 2010. Nuclear power accounted for 4.4 percent of global energy consumption, the smallest share since 1984. Japan’s nuclear output dropped 18.6 percent in 2013 and has declined by 95 percent since 2010 due to the accident at Fukushima from the tsunami that occurred in that year. Other countries with declining nuclear production in 2013 were South Korea, Ukraine, Spain, Russia, and Germany.  The United States remains the world’s largest nuclear generating nation, and is responsible for one third of the world’s production.

Hydroelectric power grew at 2.9 percent, accounting for 6.7 percent of global energy consumption. The Asia-Pacific region accounted for 78 percent of the growth, led by China and India. China’s hydroelectric output is roughly 3½ times that of the United States. In Brazil, drought reduced output by 7 percent and in Finland, Norway, and Sweden, drought reduced output by a combined 14.5 percent.

While the Obama Administration has been working to reduce consumption of coal in the United States,  other countries are increasing their consumption of coal to supply areas without power and to fuel their economic growth. The President’s plans will eliminate thousands of jobs throughout the economy by increasing electricity rates as utilities are forced to spend hundreds of billion dollars in compliance costs. Even Germany is building new coal to supply reliable baseload power to its citizens and its industries and to back-up the country’s intermittent renewable plants.

While the Administration has been busy creating the impression that coal is on its way out as a fuel for meeting the world’s energy needs, its consumption has been growing significantly.  The world is in need of the wealth-creating energy that the United States and other OECD nations used to develop their economies.  Judging by the direction of primary energy consumption in the world, it appears that this Administration’s policies are on the wrong side of history.

The Bear Unsheathes its Energy Weapon: The Russian Gas Cutoff