President Biden must be living a life of luxury and seclusion because he has no concept of how gasoline prices are set, what the demand is, and how much oil production and refinery capacity are needed to meet it.  He is back to accusing oil companies of price gouging should gasoline prices go up. Biden said that the hurricane “provides no excuse for price increases at the pump” and if it happens, he will ask federal officials to determine ”whether price gouging is going on.”   The answer should be interesting since most gas stations are independent operators, simply working to keep their lights on as so many American businesses and families are doing during record inflation and an official recession.

It is not oil companies, but President Biden, who increased U.S. gasoline prices when he started his anti-oil and gas policies on his first day in office by revoking the Presidential permit for the Keystone XL pipeline and banning oil and gas leasing supposedly “temporarily” on federal lands and waters. It is the Biden administration that is ignoring U.S. refinery closures, and doing nothing to encourage new refinery projects to keep the supply of gasoline coming. Recently, a refinery in Toledo, Ohio had to close for repairs due to a fire and a refinery in Whiting, Indiana had to get a gasoline-making fluid catalytic cracking unit back online after a fire took several units offline, including two crude units and a reformer. U.S. refineries, having lost a million barrels per day of capacity due to retirements from COVID lockdowns and demand reduction, have been going all out, producing at over 90 percent of capacity and postponing yearly maintenance so that Americans can be supplied with gasoline and diesel.

Gasoline prices are determined by market forces -– not individual companies—and retail prices at the pump are a function of supply and demand, with the largest component of the gasoline price being the global price of oil. In August, oil prices made up 57 percent of the price of gasoline and 45 percent of the price of diesel, according to the Energy Information Administration in the depiction below. Gasoline prices after reaching $5 a gallon in June have come down as oil prices have been reduced on growing fears of a global recession and Biden increasing supplies by draining oil from the Strategic Petroleum Reserve (SPR)—an emergency oil reserve. Despite promising to refill SPR when oil reaches $80 a barrel, the SPR has been depleted to 1983 levels, and there is not much left in reserve for its original emergency purposes such as Hurricane Ian. 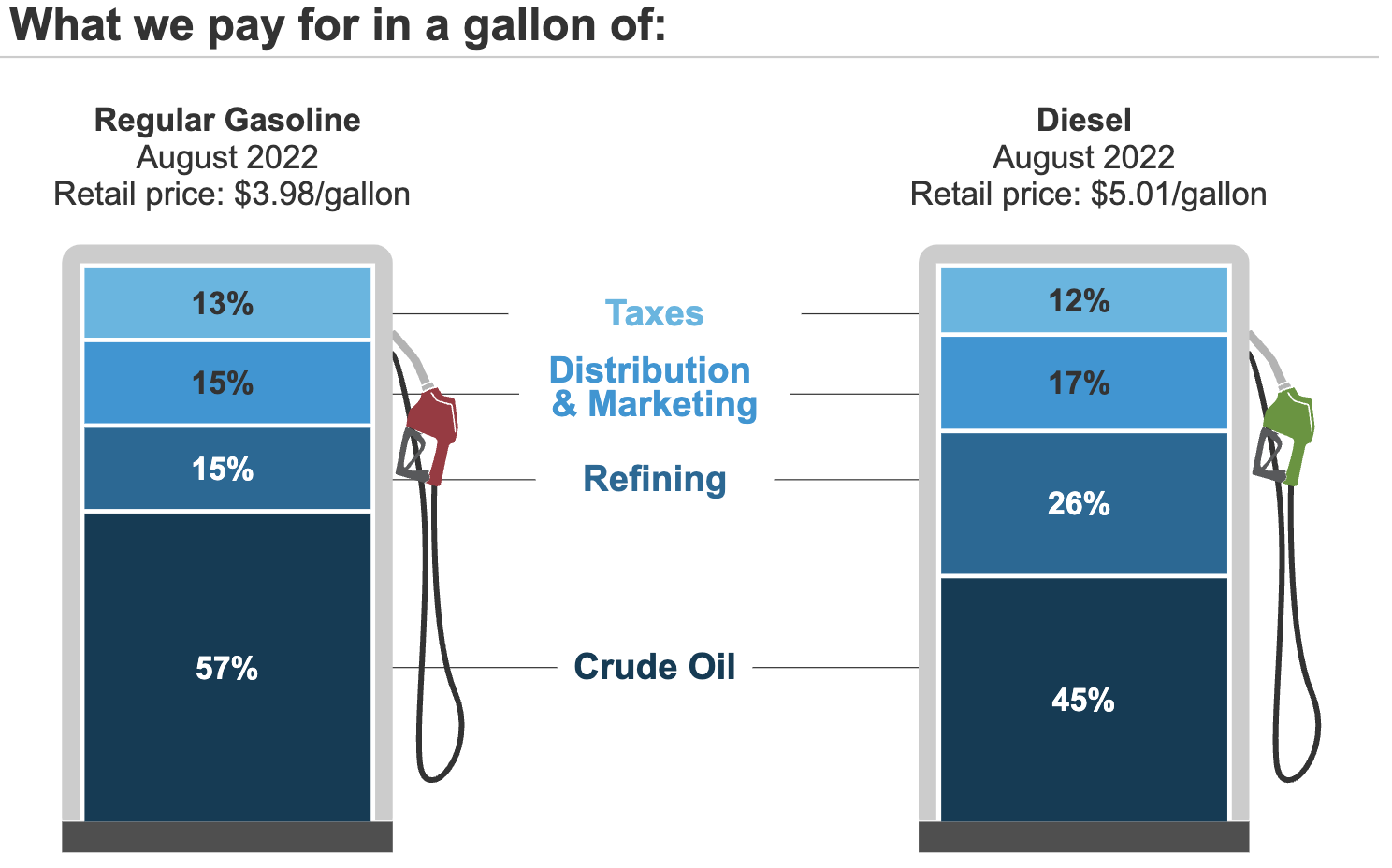 Because of Hurricane Ian, about 11 percent of oil production in the Gulf of Mexico was shut in as oil companies had to evacuate workers for safety. Personnel were evacuated from 14 production platforms and rigs. About 190,000 barrels per day of oil production were shut-in, according to Biden’s offshore regulator, the Bureau of Safety and Environmental Enforcement (BSEE). It is the first hurricane this year to disrupt oil and natural gas production in the U.S. Gulf of Mexico, which produces about 15 percent of the nation’s oil and 5 percent of its natural gas. But, this is not a new phenomenon and Biden should have been prepared for the eventuality by using SPR for emergencies—not to hide his anti-oil and gas policies from the American public.

One oil company, BP, indicated it was already working to redeploy offshore personnel to two offshore production platforms, after determining Hurricane Ian no longer posed a significant threat to its Gulf of Mexico assets. The oil major had evacuated personnel and halted output at its Na Kika and Thunder Horse platforms earlier this week.

In Florida, about 20 percent of retail gas stations are either out of gas due to buyers needing fuel for evacuations or stocking up on it as a precaution against possible shortages, or they are out of power due to downlines. That means there is less supply overall and some Florida communities where there is heightened local demand may not be able to access supplies. The market can and will work to fix the imbalance, but a return to normalcy will likely not be immediate as deliveries of new supply are constrained by road closures and massive destruction, power needs to be restored to retail stations and buyers need to return to normal purchasing habits.

If Biden sees price increases due to market forces, he could help alleviate them by having his Department of Transportation (DOT) help with new deliveries, his Department of Energy (DOE) and Federal Energy Regulatory Commission (FERC) help to restore power, and his Federal Emergency Management Agency help with the devastation from Hurricane Ivan. Instead, the DOT, DOE and FERC are busy devising new ways to force Americans into electric vehicles and destabilizing the grid with part-time (intermittent) renewable energy sources, which combined would have proved even more devastating to residents in the path of Ian. In Florida, many electric vehicle charging stations are underwater, making restoration even more difficult.

President Joe Biden raided 190 million barrels of oil from America’s Strategic Petroleum Reserve, dropping the reserve’s inventory to a 40-year low. The SPR was intended to ease the effects of unexpected supply disruptions and was used twice before: during the Persian Gulf War and after Hurricane Katrina. It was not intended to bail out Biden’s failed energy policies as he has done in an attempt to keep Congress in his party’s control. Now that he has used SPR for political purposes, he is accusing oil companies of price gouging as he suspects the rush on gasoline supplies at gas stations in Florida will increase gas prices. From economics 101, market forces are expected to increase prices during supply shortages so that supply and demand can balance. But, Biden does not want gasoline prices to escalate this close to the mid-term elections as votes and gas prices have in the past been shown to be correlated.  That is why he will stop draining the SPR not long after the elections.