A recent analysis [.pdf] from the Congressional Budget Office (CBO) made it appear as if there would be little benefit from the federal government allowing entrepreneurs to develop more of America’s oil and gas resources. Yet as we’ll see, CBO’s presentation was misleading, and it ignored the major benefits of the government changing policies to allow more access to find and develop the United States’ enormous energy potential.

The CBO report first lays out the context of its analysis:

The federal government offers private businesses the opportunity to bid on leases for the development of on- and offshore oil and natural gas resources on federal lands—although not all federally controlled lands are open to leasing now….CBO has analyzed a proposal to immediately open most federal lands to oil and gas leasing, which would affect the amounts the federal government collects in various fees and royalties both in the near term and over a longer period.

Implementing such a proposal would open two categories of property now closed to development:

The CBO report then concludes that “opening ANWR to development would yield about $5 billion in additional receipts over the next 10 years, primarily in the form of bonus payments made by private firms for the opportunity to explore for and develop resources in particular areas.” After this ten-year period, the CBO relies on EIA projections to estimate “gross royalties from leasing in ANWR would probably total between $25 billion and $50 billion (in 2010 dollars) during the 2023–2035 period, or roughly $2 billion to $4 billion a year.”

Outside of ANWR, the CBO report estimates “that additional gross proceeds from federal oil and gas leases on public lands—principally in certain sections of the OCS…would total about $2 billion over the 2013–2022 period.” Unlike ANWR, the CBO refuses to say what the increase in government revenue would be beyond the initial ten-year period, because “[m]uch of the near-term development enabled by the proposal (beyond that in ANWR) would occur under current law, albeit at a later time.”

In summary, someone taking the CBO report at face value would conclude (a) the federal and state governments at most would get about $7 billion total in the first ten years (primarily from bonus payments) if they removed all federal obstacles to ANWR and OCS development, and (b) even in the longer term from 2023-2035, we can only say with confidence that the proposal would bring in an additional $2 to $4 billion per year, relative to current policies. Billions of dollars is nothing to sneeze at, of course, but the implication is that the proponents of “drill baby, drill” are exaggerating their case.

To drive home the point, the CBO report then presents this chart:

Visually, the above chart certainly makes it seem as if complaints about federal constraints are overblown; it looks like the government is hardly restricting access to American oil and gas resources.

To respond to the CBO report, a very easy step is to consolidate the data presented in their figure. The visual trick in the CBO image involves spreading out the inaccessible resources across six different categories. Suppose instead that we consolidate everything—using their own numbers—into two categories, namely those resources on federal lands that are currently accessible, versus those that aren’t. The revised chart looks like this: 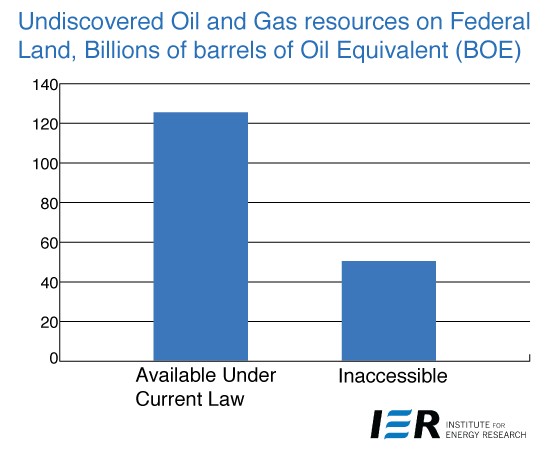 Thus, the CBO’s own numbers show that some 51 billion barrels of oil and gas resources on federal lands are currently inaccessible. That works out to 29 percent of the total, again using CBO’s own numbers. At a time when motorists are struggling with prices at the pump, and the Obama Administration is releasing oil from the Strategic Petroleum Reserve, it is significant that the CBO admits the federal government itself keeps almost 30 percent of expected US resources off-limits to development.

These calculations are not to suggest that if the federal government removed all restrictions, then imports from OPEC would fall to zero. Standard economic analysis shows that it makes a country’s people richer to import items from abroad if, on the margin, doing so is cheaper than producing everything domestically. Even so, the important point is that people warning of America’s “dependence on foreign oil” often have no idea just how blessed the country is with rich deposits. It only seems that the U.S. is starved for oil, because the federal government takes so much off the table.

The Crucial Choice of Baseline

Beyond the visually misleading chart, another aspect of the CBO report is the choice of policy baseline. Recall that the report estimated opening up ANWR would lead to $5 billion in additional government receipts over the first 10 years (i.e. through 2022), and then some $25 to $50 billion in additional receipts from 2023 – 2035. Thus the real revenue windfall came in the second decade, as the newly leased lands began cranking out product (and thus generating royalty revenue for the government).

Yet when it came to estimating the budgetary impact of opening up the OCS, the CBO would only discuss the gains in the first decade; it put them at $2 billion. CBO refused to speculate on what would happen in 2023 – 2035, because in this case, the OCS lands were technically not inaccessible at such future dates. In other words, with current policy, certain lands in ANWR cannot be developed, either now or in the future. But with much of the OCS, there is nothing in the “baseline” preventing them from being developed down the road. Hence, CBO will not say that opening up such lands in the present, will lead to higher receipts for the government beyond the year 2022.

Although such accounting may be appropriate in a technical sense, it is misleading to the average reader of the CBO report. If we use the same scaling factor as CBO applied to ANWR, we would conclude that in addition to the $2 billion in extra receipts from expanded OCS development in the years 2013 – 2022, the government (states and federal) could expect additional receipts of $10 to $20 billion from 2023 – 2035. Another way of putting it is that this potential $10 to $20 billion in government receipts during 2023 – 2035 will not materialize if the federal government maintains its current restrictions on OCS development.

Thus far, we have taken the CBO’s numbers at face value, and just pointed out two tricks with the presentation style. However, in this final section we’ll challenge the estimates themselves.

For starters, the CBO is probably grossly understating the potential for bonus bids in ANWR, when it puts them at less than $5 billion for the entire decade of 2013 – 2022. Yet in FY 2008 alone, total bonus payments were more than $10 billion. Now to be fair, this isn’t an apples to apples comparison, since the expanded ANWR development would only represent a fraction of total bonus payments. Nonetheless, the figure shows that CBO’s ANWR analysis is quite conservative.

More generally, other analysts have projected much larger receipts for federal and state governments, from expanded development. For example, in a February 2009 study, Joseph Mason estimated that in the long-run, expanded OCS development (not including ANWR) would yield an average of $14.3 billion in extra royalty revenue per year. He also estimated an additional $54.7 billion in federal tax revenue annually, and $18.7 billion in additional state and local tax revenue (though these figures count the tax receipts from expanded economic activity).

To show that these aren’t pedantic quibbles, we can point to a real-world example of what we mean. In a June 26, 2006 memo[RM1]  to Richard Pombo , CBO projected federal OCS revenues in 2008 (net of sharing with states) to be about $10.5 billion. Yet actual OCS revenues in 2008 were $18 billion. This is a rather large underestimate, for a projection that was made only two years earlier. (Also, the bulk of the discrepancy was in the form of bonus payments, which are not particularly susceptible to a temporarily high spot price of oil.)

There is another line of argument to show why the CBO estimates could be very pessimistic. When making its projections (used to generate the information in its bar chart, shown above), CBO is limited by the sources they use to determine how much oil and gas exists in the U.S. and where it is expected to be found.  Therefore, in their chart detailing undiscovered oil and gas on federal lands, by far the largest resources are expected to be found in the central and western Gulf of Mexico—this is the far left column in the first chart above.  Why does CBO estimate so much more oil and gas deposits in this region, compared to other parts of the OCS? Why, it’s simply because the central and western Gulf of Mexico is where the vast majority of drilling—and therefore all the government’s knowledge—about resource potential exists. As this map from EIA shows, over the last 60 years the central and western Gulf of Mexico have been a hotbed of industry activity. If the CBO uses the government’s knowledge base which is severely limited—given that only about 2% of the nation’s OCS is leased for energy production (mostly in the Gulf of Mexico)—it only makes sense that they conclude that is where the vast bulk of future supplies will be found.

In terms of government projections, the oil in the Bakken Shale formation did not exist until it was discovered by ingenuity, investment technology, and hard work. If regulatory or statutory constraints had prevented people from actually looking, these resources never would have existed on the government’s books. CBO is severely limited because it can only look at what the government says it knows, which is very little since the government has allowed so little drilling on its vast land holds on- and offshore.

The CBO’s recent analysis lowballs the likely impact on government receipts from expanded ANWR and OCS development. Ultimately, however, the case for getting the federal government out of the way of oil and gas development isn’t about government revenues. Market economies have price signals and the profit and loss test to determine whether resources should be developed, and at what pace. Federal restrictions remove options, raise energy prices, and slow recovery from an economic downturn. In this context, the benefits to government budgets are simply icing on the cake, but the icing is vastly thicker and richer than CBO projects.