“America’s shale gas production alone has exceeded that of total Chinese gas output. That gives us a lot of confidence,” said Zhang Dawei, deputy director of the Strategic Research Center for Oil and Gas in the Ministry of Land and Resources.

China is looking at the production and resources of shale gas in the United States and is planning to emulate them. China’s technically recoverable resources of shale gas are estimated to be about 50 percent higher than those in the United States, which ranks second to China in a recent assessment of shale gas resources in 32 countries. In November 2009, during a state visit to Beijing, President Obama signed a cooperation pact with China that provides for U.S. expertise in drilling for shale gas. China seems not to be concerned about any environmental impacts regarding shale gas, while environmentalists in this country are protesting the hydraulic fracturing technology used to produce it.  China’s goal is to have about a fifth of its natural gas production come from unconventional gas, mainly shale gas, by 2030.

In 2009, China produced 2,929 billion cubic feet of natural gas and consumed 3,075 billion cubic feet, importing 146 billion cubic feet. The country relies on natural gas for only 3 percent of its energy consumption, getting more than 70 percent of its energy from coal, followed by 19 percent from oil and 6 percent from hydropower. The government is planning to increase consumption of natural gas to a 10-percent share by 2030, and will need to continue importing gas through liquefied natural gas facilities and pipelines from neighboring countries. The Energy Information Administration projects that gas demand in China will more than triple by 2035, growing at 5 percent a year.

Shale gas is one of China’s top targets for technological breakthroughs in its five year plan for 2011-2015. China’s Ministry of Land and Resources intended to hold its first auction of shale gas blocks in the first quarter of this year, delaying it from November of last year. The auction is for eight exploration blocks in four provinces covering 18,000 square kilometers. PetroChina, which produces about 80 percent of China’s total gas output and is the world’s second-most valuable energy company, completed its first shale gas well in the Sichuan province last month. In February, PetroChina announced it would buy a $5.4 billion stake in Calgary-based Encana Corp’s shale gas assets. A China National Petroleum Corporation executive indicated, “We don’t care much about whether the market believes it’s a good or bad price. The top priority is gaining access to a resource and mature technology. Price is only a secondary consideration.” 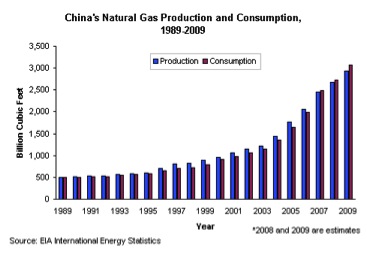 Six months after President Obama’s visit in 2009, China and the United States set up a task force and agreed to jointly conduct a shale gas project, assessing an aging oil basin in China that was not very fruitful.  According to industry officials, the U.S. government and companies have invited Chinese geologists for technical workshops and field trips, but Chinese firms are less interested about sharing technical information, or opening up new blocks for resource studies.

As of the end of 2009, China is estimated to have almost 21,000 miles of natural gas pipelines and is expanding at a rate of 6 percent per year.  The Chinese government plans to construct 14,400 miles of new pipelines between 2009 and 2015. The West-East Gas Pipeline, which was commissioned in 2004, is China’s largest natural gas pipeline at 2,500 miles, linking major natural gas supply bases in western China with markets in the east. The pipeline’s annual capacity is 424 billion cubic feet and there are plans to increase it to 600 billion cubic feet. Four additional west-to-east pipelines are also planned with the second one to be completed in 2012.

China’s first import natural gas pipeline, the Central Asian Gas Pipeline, began operations in December 2009, carrying natural gas imports from Turkmenistan, Uzbekistan, and Kazakhstan.  The pipeline spans 1,130 miles and has a capacity of 200 billion cubic feet per year with plans to increase gas supply to 1.4 trillion cubic feet per year. China has signed agreements with Uzbekistan, Kazakhstan, Russia and Myanmar for gas supplies and additional pipeline construction in the future.

China imported its first shipment of liquefied natural gas in the summer of 2006 and imported 730 million cubic feet per day in 2009 and 1,120 million cubic feet per day in the first half of 2010. China has three regasification terminals, four under construction, and others in the approval process. China receives its liquefied natural gas from Australia, Indonesia, Malaysia, and Qatar. Because international liquefied natural gas prices are higher than domestic gas since their contracts are indexed to oil prices, competition may be greater from domestic gas, particularly shale gas, and neighboring sources in the future. For China to develop its shale gas resources, its natural gas pipeline system, which is about a tenth of the size of the system in the United States, would need to be significantly expanded, requiring billions of dollars.

Environmentalists have concerns regarding the technology used to produce shale gas. Hydraulic fracturing is a drilling technique in which water, chemicals, and sand are pumped into the well to unlock the gas trapped in shale rock by producing fractures that allow natural gas to flow from the shale into the well. Horizontal drilling is used to provide greater access to the gas by turning the drill bit at the desired depth to bore through the well horizontally, permitting the capture of more natural gas than vertical wells allow. Hydraulic fracturing enables gas producers to extract shale gas at a more reasonable cost than conventional drilling, which does not allow capture of as much gas. Some environmentalists   argue that the chemicals used in the “fracking” operation contaminate the water table. But, to date, there has been no evidence of water contamination.

EPA conducted a five-year-long study of the technology involved in shale gas development, which was released to the public in 2004, where it found the technology to be safe and capable of posing “little or no threat” to supplies of drinking water residing as much as tens of thousands  of feet from areas in which fracturing activities take place. Further, hydraulic fracturing has been in commercial use for more than 60 years,  and not once in that time has it been credibly tied to the contamination of drinking water. Because Congress exempted hydraulic fracturing from the Safe Drinking Water Act in 2005, EPA is now looking to regulate the use of diesel fuel in “fracking” operations.  But not all companies use diesel fuel in the fracturing fluid, which is largely composed of water and sand. Further, industry groups have brought law suits against EPA for not using proper procedures in their attempt to establish permitting guidelines to regulate the use of diesel fuel in “fracking” operations.

A study by Cornell University indicated that significant amounts of methane, a greenhouse gas, escapes into the atmosphere during the production and distribution of shale gas and that shale gas emitted more greenhouse gases than coal. This study has been debunked because of its use of questionable data and a 20 year Global Warming Potential factor. As Melanie Kenderdine, Director of the MIT Energy Initiative states, “What he (Professor Howarth) has done in his analysis is deviated from what are accepted standards, accepted by EPA, DOE, the IPCC, European Trading Scheme, California Air Resources board, where essentially the denominator that they use to calculate the impacts of various greenhouse gases is an agreed upon 100 years; Professor Howarth uses 20 years.” “[T]here are major scientific organizations that think we should actually extend that hundred-year period, not shorten it.  So he has changed what is a standard number for calculating the impacts of greenhouse gas emissions … “  The Clean Air Task Force, the Council on Foreign Relations, and the National Resource Defense Council have similar concerns with the Cornell study.

China has found another avenue for increasing its much needed energy supplies—shale gas. China is estimated to have more technically recoverable shale gas resources than any other country in the world.  And, its people are very good at learning from and imitating experts around the world in extracting resources. Here again China is oblivious to environmental issues as it is in its use of coal for over 70 percent of its energy and its mining of rare earth minerals used in making certain renewable technologies and in weapon systems, where China dominates the global market.

For the United States, the country with the second largest technically recoverable shale gas resources, environmental concerns are at issue with demonstrations in Texas, New York, and Pennsylvania; public forums sponsored by the Environmental Protection Agency; and the threat of more studies to discredit the strides that hydraulic fracturing and horizontal drilling have made to provide reasonably priced natural gas. While the United States has the technical expertise to develop its shale gas resources, it is challenged by those who want the American public to pay high energy prices. China, on the other hand, wants to provide a better standard of living for its people and is developing any resource that will pave the way.

Chickens are Coming Home to Roost for Obama Energy Plan

Oil Prices, Speculators, and the Fed