As gasoline prices continue to rise, government officials realize they had better find someone to blame to divert the public’s anger. President Obama just a few weeks ago joked about the complaints, but apparently his advisors told him to be more sensitive to hurting motorists. Now the message from the White House is the familiar slogan: high gas prices are the fault of speculators and greedy oil companies.

Although it might provide emotional relief, punishing speculators is a classic case of shooting the messenger. And whatever the merits of restructuring the tax code, surely raising liabilities for oil producers won’t make them increase activity.

If President Obama really wants to get to the heart of rising oil (and food) prices, he should have a long talk with Ben Bernanke, whom he reappointed as Chairman of the Federal Reserve. By flooding the world with dollars, Bernanke has driven up commodity prices across the board as the dollar depreciates.

Speculators Are Doing Their Job

As I explained in a previous post, speculators in the commodities markets are doing exactly what we want them to do, in light of the events in the Middle East. To understand (partly) why oil has risen so much in recent months, I can quote from Obama himself:

The problem is … speculators and people make various bets, and they say, you know what, we think that maybe there’s a 20 percent chance that something might happen in the Middle East that might disrupt oil supply, so we’re going to bet that oil is going to go up real high. And that spikes up prices significantly.

To reiterate, this is the textbook function of socially beneficial speculation. If there is a possibility that prices will rise sharply in the near future, then current prices should rise to reflect that reality. The higher price leads to more careful usage of the resource, while it simultaneously prods other producers to ramp up their output.

The current configuration of oil prices—both in terms of the spot market and the “futures” prices at various dates—give the incentive to pump oil as fast as possible[1] (to earn the high prices while they last) and to stockpile the excess production. In the event that extraction capacity is impaired because of the Libyan war or some other political event, we will be glad to have extra inventories.

It’s true that sometimes speculation can get caught in a self-fulfilling prophecy, and push an asset up into an unsustainable bubble. (This is what happened with real estate prices in a few years ago.) Nobody is claiming that people in the financial sector are infallible. The point, however, is that speculators are only bidding up the price of oil today, because they anticipate—and with good reason—that it will be higher in the near future. To blame high oil prices on speculators is akin to blaming winter on thermometers.

If President Obama wants to harness the forces of financial speculation the other way, all he needs to do is announce policies that favor increased domestic production of oil. When President Bush ended the executive moratorium on offshore drilling in 2008, the financial markets pushed down the price of crude oil by $9 per barrel during the speech.

Since When Do Tax Hikes Lead to Lower Prices?

The issue of simplifying the tax code is full of nuances. For those who favor a free market, where the government doesn’t pick winners or losers, the best tax code (if we must have a tax code at all) is one that has low marginal rates and a wide base. The objective is to raise the desired amount of revenue with as little distortion to what the market would have done in the absence of such taxation.

Unfortunately, we are not designing a tax code from scratch, but are taking the current, convoluted creature as the starting point. In this context, the twin goals of “eliminating tax loopholes” and “reducing the burden on the private sector” conflict with each other. Economists and other policy wonks can have honest disagreements about the desirability of removing this or that “tax subsidy” to energy companies or any other group.

However, what should not be in doubt is that raising taxes on a particular industry will decrease output and raise prices for consumers. It is therefore nonsensical when President Obama, Dennis Kucinich and others suggest that a proper remedy for high gas prices is to saddle Exxon and others with higher tax bills. Yes, the high price of oil has a lot to do with the high profits of oil companies, but it doesn’t follow that taxing away more of the oil companies’ profits will therefore reduce oil prices.

Ironically, the environmentalist left should understand this principle quite well. What do they recommend to get people to use less carbon-intensive goods? Why, they recommend imposing a tax on such activities. In the context of a carbon tax, the left understands basic economics: If you want to discourage people from doing something, you impose a tax on it.

Turn back to oil prices. If the government wanted to reduce oil production and thereby increase oil prices, it should impose higher taxes on oil producers. If the goal instead (as Obama and Kucinich claim) is to lower oil and gas prices, then they should be calling for tax breaks for those companies in the business of producing and refining oil.

In another ironic twist, it turns out that historically, high oil prices go hand-in-hand with higher effective tax rates on oil companies. In other words, given the complexities of the current tax code, the actual percentage of the oil majors’ income going to Uncle Sam is higher, when the price of oil is high. For example, in 2008 the effective rate was 42.3 percent, but in 2009 (when the average price of oil was far lower) the effective tax rate had plummeted to 26.3 percent. In this respect, people who want the oil majors to “pay their fair share” should actually be rooting for high oil prices.

The Role of the Federal Reserve

Beyond the short-term price hikes due to the political situation in the Middle East, the price of oil has risen along with other commodities because of Ben Bernanke’s monetary policies. The graph below shows the changing fortunes of the US dollar and crude oil prices, quoted in dollars: 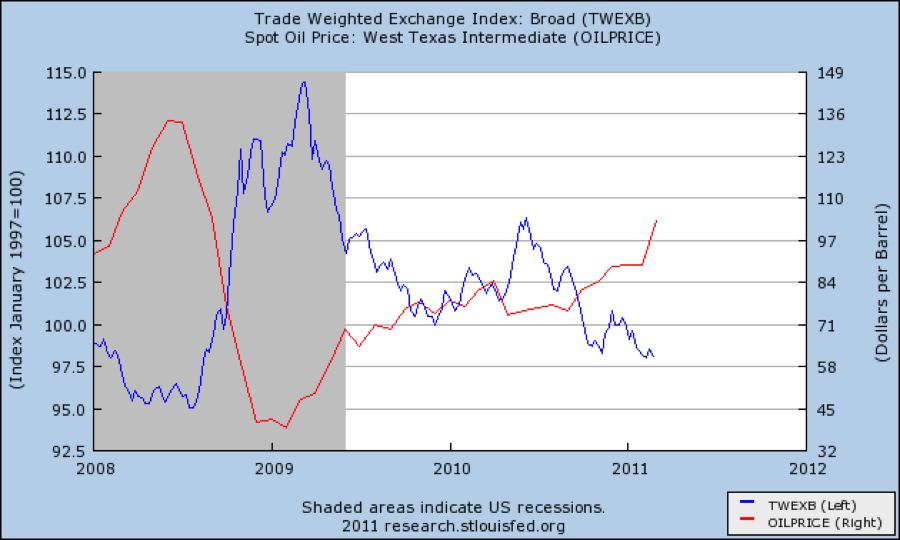 As the financial crisis set in during the fall of 2008, the price of oil (red line, right axis) collapsed from its all-time highs. At the same time, the dollar (blue line, left axis) appreciated strongly against other currencies, as investors sought a safe haven in U.S. Treasury securities. (When foreign investors want to buy American assets, they have to sell their own currencies to buy dollars.)

But these trends reversed in early 2009, when Ben Bernanke announced the first major round of “quantitative easing.” Since its 2009 peak, the dollar index has fallen about 15 percent against other currencies, while the price of crude oil has more than tripled. So some of the price rise in oil (quoted in dollars) is directly due to the falling dollar itself, as oil is traded on world markets and must be the same price to all buyers (quoted in their own currencies).

However, it would be wrong to conclude that most of the rise in oil is due to the its “fundamentals.” Investors around their world are rushing into commodities (in part) to hedge themselves against the possibility of significant future price inflation. The Fed and other major central banks have been creating money at full tilt since mid-2008, and many investors want to avoid getting wiped out by a possible flood of price rises. Because the economy is so awful, many investors are heading into things that will always be useful, namely commodities.

To underscore that this isn’t merely an issue of the “fundamentals” of crude oil, note that gold is hitting all-time highs while silver has more than doubled in the last 12 months alone. Yes, in one sense all of these moves are caused by “speculators,” but they are speculating with good reason: Bernanke and other central bankers are injecting more liquidity into the financial sector than has ever been done in world history.

Markets are complex and there are many reasons for particular price movements. However, when it comes to high oil prices, we can be fairly confident in saying that new tax hikes will not fix the problem, while tighter Fed policy would.

[1] It’s true that Saudi Arabia—hardly an illustration of the free market at work—has cut output, but that isn’t the fault of speculatively high oil prices. If anything currently high prices should induce producers with excess capacity to boost output.

Solar Equipment Manufacturer in Trouble Due to Low Demand