“The federal government is ultimately responsible for the long-term … consistent policy” for energy companies, Secretary of Energy Chu said. “A clean energy portfolio standard is one example of a potential policy that the administration and Congress should discuss. … In this time of fiscal austerity I propose such a standard.”

With each passing day, the odds of Congress passing a Renewable Electricity Standard grow more and more dim. But Energy Secretary Chu, Senator Graham and others are now promoting a similar mandate, just with a new name. Instead of a renewable electricity mandate, they are promoting a “clean energy standard” to “encourage” investments in nuclear energy, coal with carbon capture and sequestration technology, and renewable energy in the electric generating sector. But despite the happy talk about “clean energy standards,” these mandates will increase electricity prices and make our economy less competitive.

The first problem with a “clean energy standard” is the name. The term “clean energy standard” is a complete misnomer. Clean is defined by the specific legislation and not by common sense. For example, Secretary Chu’s definition is that the technology should remove 90 percent of emissions. Second, the schemes do not regulate all energy, but just electricity production. Third, these are mandates and not merely “standards.”

It is difficult to understand why people support these mandates because many of their arguments do not hold water. According to E&E News, Sen. Graham supports a “clean” energy standard because of “jobs, jobs, jobs.” E&E states that Graham “predicts new energy mandates can be tailored to help businesses compete with China and not harm them economically.”[i] Graham’s argument has no support in theory or practice. As explained below, “clean” electricity mandates mandate the use of more expensive types of electricity generation. This artificially increases the cost of electricity, increasing the cost of doing business in America, and forcing energy-price sensitive industries to leave the United States for more welcoming economic environments.

Sen. Graham also claims to support a “clean” energy mandate because of pollution concerns. He stated, “I’m in the camp that all things being equal, that it would be good to clean up the air, carbon being just one pollutant. But I want to do it in a way that creates jobs, not loses jobs.” [ii] Sen. Graham needs to brush up on economics so that he will realize that, on net, mandates reduce jobs and do not create them. Also, while carbon can be a pollutant Sen. Graham isn’t talking about carbon, but carbon dioxide. The problem with lumping carbon dioxide in pollutants that are dirty, or toxic, or otherwise harmful is that carbon dioxide itself is clean. Carbon dioxide levels could be orders of magnitude higher and the air would still be just as clean as it is today. The difference is that higher carbon dioxide concentrations would impact the atmosphere’s greenhouse effect.

It is also difficult to take one of Sen. Ben Cardin’s reasons for considering a “clean energy mandate” seriously. He said, “If a clean energy standard gets us all off of imported oil, that’s good.” Sen. Cardin apparently does not know that petroleum only produces 1 percent of our electricity generation. The overwhelming majority of oil is used as a transportation fuel, not to make electricity. A “clean” energy mandate will not impact imported oil in any material way.

The mandate Secretary Chu is proposing would be 50 percent “clean energy” by 2050, with an interim target of 25 percent by 2025, where clean energy is defined as any generation that can capture 90 percent of emissions. According to Secretary Chu, the clean energy standard would not cost the government money, but would instead be a direct cost to consumers and the market.[iii] 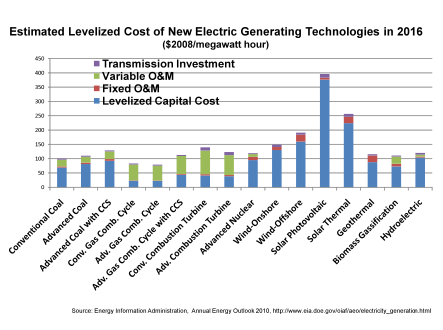 And, once EIA updates its generating cost data, these percentages will be even higher, because EIA’s updated capital cost data show that the capital costs for nuclear are 37 percent higher than assumed in the Annual Energy Outlook 2010 forecast; for wind, they are 21 percent higher; and for clean coal, they are 39 percent higher.[v]

Forecasters are predicting that the generation mix will be different in the future—less coal, possibly more natural gas, and more renewable generating technologies as a result of pressure relating to greenhouse gas emissions.

Black and Veatch. For North American electricity markets, for example, Black and Veatch, an engineering firm, sees coal decreasing its market share from 49 percent to 25 percent by 2035. The reduction in coal fired generation is based on new environmental rules causing the closure of 16 percent of current coal generating capacity. Natural gas generation, due to low natural gas prices, is seen doubling its share to 40 percent, and non-hydroelectric renewable technologies are expected to increase their share from 4 percent to 11 percent.[vi] Including clean coal, which Black and Veatch estimate will have a 1 percent share by 2035, hydropower with an 8 percent share, and nuclear power with a 21 percent share, their “clean” electricity projection is at 41 percent in 2035.[vii] 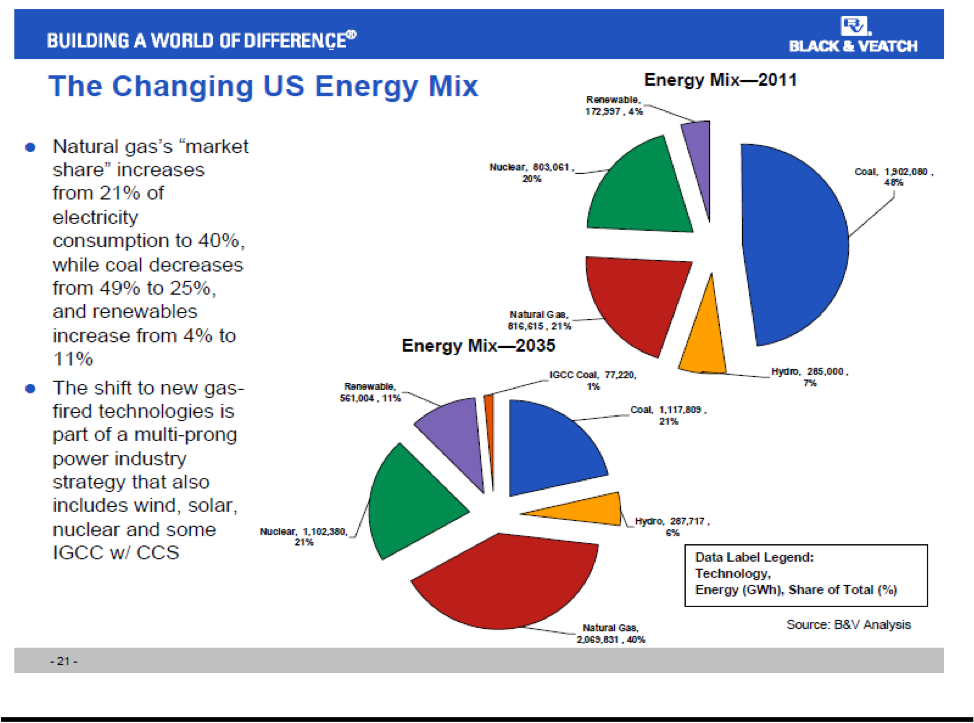 International Energy Agency. The International Energy Agency (IEA) in its World Energy Outlook 2010 sees a “profound change in the way we generate electricity” due to higher projected fossil fuel prices and government policies to increase national security and to curb carbon dioxide emissions.[viii] Coal-fired generation worldwide is expected to decrease from a current 41 percent share to 32 percent in 2035 despite large increases in developing countries, natural gas-fired generation globally is expected to remain at a 21 percent share, nuclear power increases its share marginally adding 360 gigawatts of capacity worldwide and extending the life of existing units, and renewable technologies (including hydropower) increase their share from 19 percent to almost 33 percent as a result of favorable government policies that IEA explains are critical. Because renewable technologies are more capital intensive than traditional coal and natural gas generating technologies, IEA estimates that the worldwide renewable investment needed between 2010 and 2035 would be $5.7 trillion (2009 dollars). The agency estimated that government support for renewable generating technologies in 2009 totaled $37 billion worldwide and that an additional $129 billion (2009 dollars) would need to be subsidized by 2035. The estimate for the “clean” electricity share [DRS1] worldwide based on this forecast is between 45 and 50 percent in 2035.

Energy information Administration. Forecasts made earlier this year by the Energy Information Administration (EIA) have a lower “clean” electricity share in 2035 with 34 percent for the United States and 36 percent for the world in their reference case projections from the Annual Energy Outlook 2010[ix] and the International Energy Outlook 2010[x], respectively. The EIA forecasts are based on laws and regulations in place at the time the forecasts were made.

While several senators and Secretary of Energy Chu are touting the benefits of a clean energy standard, the fact is that electricity consumers will be required to pay more since these technologies are more expensive than traditional coal and natural gas technologies. And, the least expensive of these technologies will benefit the most, which currently is wind power. To increase the share of clean coal and nuclear power, the market needs to find a way to bring their cost down so that they can compete against traditional technologies. Governments can help the market achieve lower costs without resorting to subsidies and grants that are just another form of payment by the public by decreasing red tape and regulatory oversight.

Forecasters are already showing the trend toward clean generating technologies, with the renewable, hydroelectric, and nuclear share ranging from 34 to 47 percent in 2035, despite low natural gas prices and large increases expected in coal-fired generating capacity in developing countries such as China and India. But, as the IEA indicates, to achieve a percentage in the high 40’s requires strong government support for renewable technologies.