The moratorium banned any energy leasing off the West Coast and East Coast. Ending the moratorium will allow the first exploration off the West and East Coast in over 20 years. As spelled out below, however, there is a lot of red tape that needs to be cut through before that exploration can actually occur. Also, ending the moratorium does not ease the ban on exploration and production 125 miles off Florida’s coast in the Gulf of Mexico. This ban was created by the Gulf of Mexico Energy Security Act of 2006 and it will not expire until 2022. 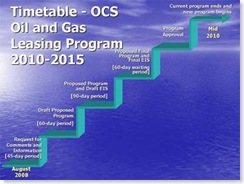 Besides banning offshore production, the moratorium also banned the development of oil shale in Utah, Wyoming, and Colorado. Lifting the moratorium will allow oil shale exploration and development activities to move forward. This is critically important because there is more oil locked up in oil shale than Saudi Arabia’s oil reserves.

Ending the moratorium will allow energy exploration and production to move forward, but there are many activities that need to occur for actual production to take place.

MMS, a part of the Department of the Interior, regulates the OCS under the Outer Continental Shelf Lands Act (OCSLA). Section 18 of OCSLA requires MMS to adopt a 5-year leasing program which describes the scheduled lease sales for a 5-year period, along with policies pertaining to the size and location of sales and the receipt of fair-market value. To develop the five-year program, MMS takes the following steps:

Second, while Congress may allow the moratorium to expire at the end of September, there will likely be a fight during the 60-day period in which Congress can object to a final leasing plan.

The 5-year leasing plan selects broad areas in which MMS will offer leases. After MMS completes the 5-year plan, the next step is to go through the process of selecting the actual lease areas and offering the leases for sale. To conduct actual lease sales, MMS takes the following steps:

If everything goes well, this entire process from the request for information to the actual sale may take two or more years.[2] But as with the development of the 5-year plan, there are many ways to slow down the process, especially through litigation. For example, earlier this year environmental special interest groups sued to stop a lease sale on the Chukchi Sea. Environmental activists would likely sue on all new lease sales on the West and East Coast, slowing down any new energy production.

After MMS has produced a 5-year plan and carried out the lease sales, it will still take time for energy companies to explore and start producing oil (unless the lease sales are offered offshore of California where we already know where some resources are).

Here is some of the typical activities that need to occur for an energy company to produce energy:

It is great news that Congress has decided to lift the OCS moratorium. Now we can start moving forward with all of the steps necessary to start producing more domestic energy. There are a lot of steps, but we haven’t been able to take any of them until now.

One last caveat, this is an important victory, but Congress and future Administrations can reverse course and lock up America’s energy resources. We need to be vigilant to safeguard our domestic energy production.